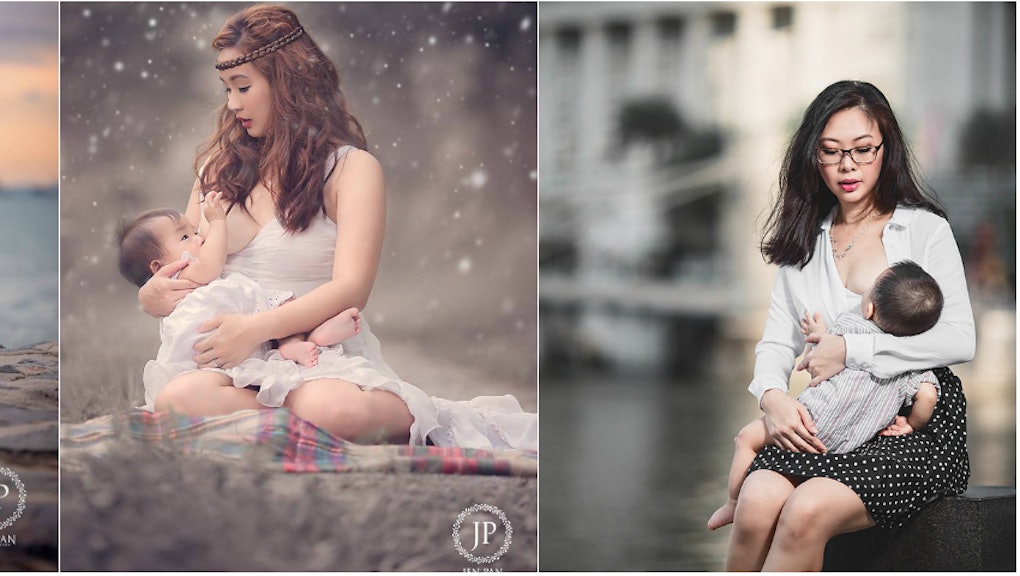 Breastfeeding is itself an emotional, personal experience. It gets tougher when you're being judged for or prevented from doing it.

So in a photo series called "The Magical World of Breastfeeding," Singapore-based photographer Jen Pan is aiming to de-stigmatize breastfeeding, one stunning image at a time.

Pan told Mic that she got the idea after joining a number of breastfeeding support groups as a nursing mother.

"I learn[ed] that many nursing mothers face issues at their workplace but are unable to voice them due to fear of backlash," she said in an email.

"Thus, many of them could only seek comfort from other nursing mothers in a private support group," she said. "When we decided to embark on this project, the main intention [was] to show beautiful women breastfeeding their babies. We wanted to celebrate motherhood and at the same time create awareness for the mothers who face difficulties at the workplace."

Read more: This Mom Says She Was Banned From a Women's Group Meeting For Breastfeeding

On her website, Pan writes of professional women who have been discriminated against when trying to pump breast milk at the office. That's why she decided to feature a businesswoman in one part of her photo series.

"We wanted to celebrate motherhood and at the same time create awareness for the mothers who face difficulties at the workplace."

Indeed, pumping breast milk at work can be a struggle for some women. While United States law says that women are entitled to a "reasonable break time" to pump in a clean, non-bathroom space at work, employers have still denied women the right to do so. Meanwhile, Singapore, where Pan lives, has seen efforts to normalize breast pumping at work, but Pan's experience proves that stories of discrimination still abound.

"Our aim for this series has always been to inspire mothers in their breastfeeding journey," she told Mic. "Mothers need to nurse whenever their baby is hungry and whichever way they feed their baby."

She said that the response to the project so far has been mostly positive, with many moms expressing admiration and thanks for creating such a powerful series of images.

"We stand firm on our goal to normalize breastfeeding and to create awareness towards workplace discrimination using our art," she said.

Check out more of Pan's work over at her Facebook page.