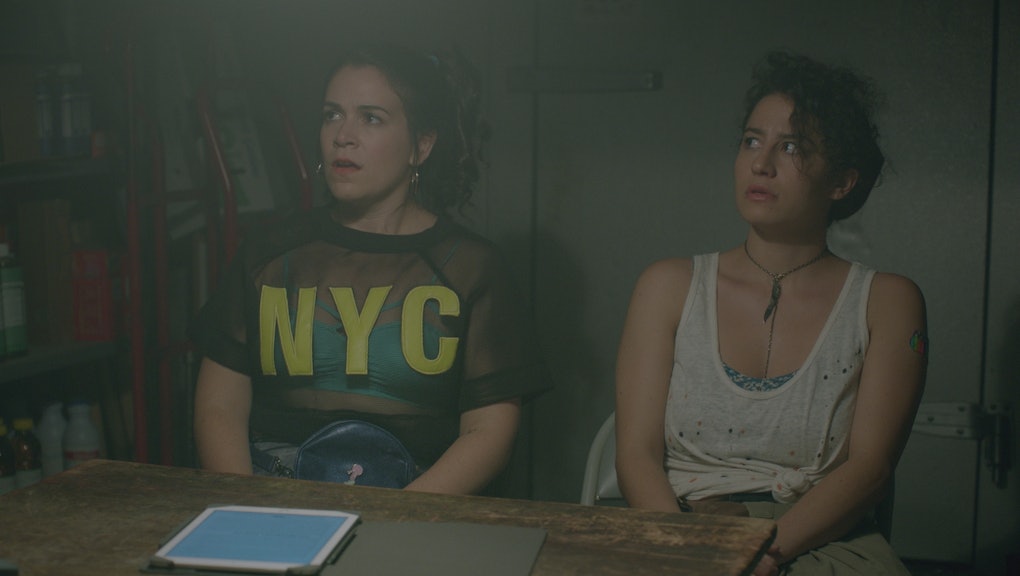 Assemble a group of female friends on a TV show or movie, and the Sex and the City comparisons are bound to fly.

That Broad City has largely managed to avoid these comparisons in its first two seasons is fairly miraculous, and something the show itself hasn't really broached. Until now, that is. Broad City creators Abbi Jacobson and Ilana Glazer openly acknowledged the inevitable comparisons in Wednesday night's season three premiere, as their characters Abbi and Ilana, along with friend Lincoln (played by Hannibal Buress), debated which SATC characters they are.

Read more: The Best Part of 'Broad City' Season 3 Might Be Abbi and Alana's DGAF Fashion

If you've ever seen SATC — hell, even if you haven't — you've probably also debated whether you're a Carrie, Miranda, Charlotte or Samantha; like Abbi, you've probably also settled on being some combination of the two. (Or three, as Abbi reluctantly points out that while she is sure she's a Carrie-Miranda mix, she's also "a little bit of Charlotte, even though she really annoys me.")

But for viewers who feel they truly "get" the endearing wackiness of Broad City — the ones who find themselves murmuring "it me" as they watch Ilana fall asleep on the toilet, or see Abbi prance naked through her apartment as she lip syncs Lady Gaga — the SATC comparison might seem off-base.

In fact, as pictures of female friendship, the two groups couldn't be more different.

Yes, as a female-anchored show, Sex and the City's Carrie-led crew undoubtedly laid the groundwork for Abbi and Ilana. But in SATC, the marked distinctions between the characters, as stringently divided as Myers-Briggs types, bordered on stereotypical. The differences between each of these independent women were one of the show's big hooks, with the four drastically different characters tied together only by the most tenuous of commonalities (men, cocktails, sex). Rerun watchers still wonder if Samantha, Charlotte and Miranda would hang out independently if it weren't for Carrie.

But more than being complex individuals, undefined by stereotypes, Abbi and Ilana's friendship extends far beyond shared interests in dating, or even just sex. Where the SATC women went on their own adventures then reconvened every so often to dish, Abbi and Ilana share a codependent relationship that, let's be honest, might raise a few red flags if it were a romantic one. (If your friend got involved with someone who, say, got her pepper-sprayed by a stranger or encouraged her to steal air conditioning units from minors, you might worry, not laugh.)

The characters' antics in Wednesday's premiere are pitch-perfect illustrations of this intricate dependency. Somewhere between a zoo-like sample sale and an art gallery opening, Abbi gets trapped inside a port-a-potty. After rescuing her, Ilana — who has gotten a massive, magnetized bike chain stuck around her waist — gets attached to the back of a moving truck just before it speeds away. Abbi chases after her, of course, and even gets fresh with the truck driver while she rescues her partner in sometimes-literal crime.

That intense, mutual reliance, as many critics have noted since Broad City's debut, is what makes Abbi and Ilana's bond so believable. Ultimately, it also makes each of them a little less distinct on her own — but that's the beauty of Broad City, in terms of the outrageous situations it sets up for the characters, and also for the way it represents friendship. The purpose of friendship is to do life together, instead of just reviewing life together every so often over salad.

The codependency that characterizes Abbi and Ilana's friendship is the show's ultimate "it me" factor, arguably more than the characters themselves. We may not see ourselves nearly aligning as an "Abbi" or "Ilana," but we see our friendships reflected in theirs.