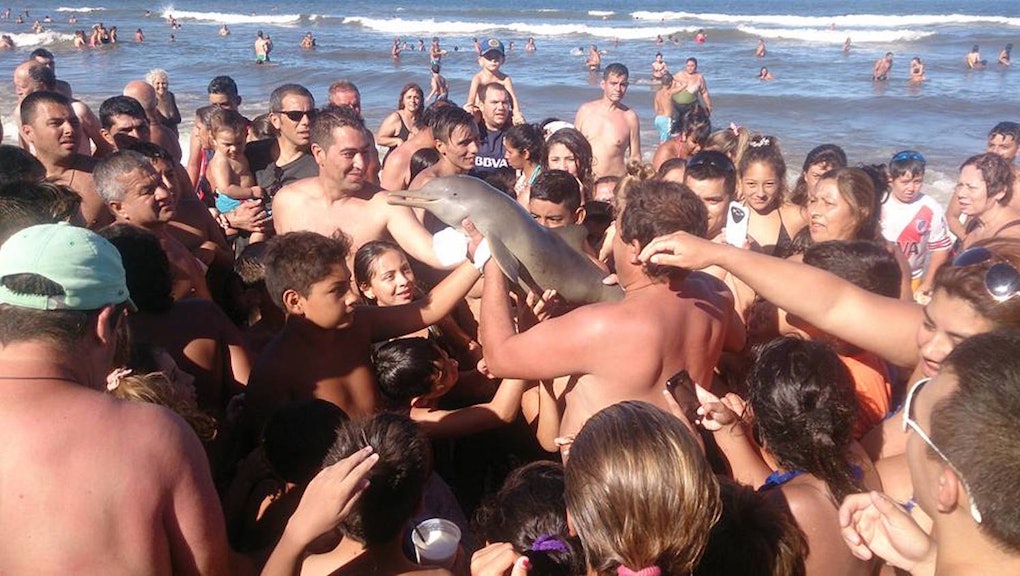 Beachgoers at Santa Teresita, Argentina, plucked a young dolphin from the ocean to pass it around and take selfies when the animal apparently overheated and died.

The dolphin was still being passed around for photo opportunities after its death, before it was unceremoniously dumped in the sand, according to Sky News.

Hernan Coria, who was present for the incident, documented the event and shared it on Facebook on Feb. 10, producing impassioned responses from angry users around the world. The posts have since been removed.

Read more: Japanese Ship to Kill 333 Whales Per Year for "Research" — And the World Is Not Happy

The dolphin was a La Plata, or Franciscana, a species classified as "vulnerable" by the International Union for Conservation of Nature and is on the organization's Red List of Threatened Species. The IUCN estimates there could be as few as 40,000 left in the world, and are some of the most rare in the waters of South America.

"The Franciscana, like other species, cannot remain for much time outside of the water, it has thick fatty skin which gives it heat and means that taking it out of the water rapidly causes it to dehydrate and die," the Argentine Wildlife Foundation said in a statement, according to Sky News.

"This occasion serves to inform the public about the urgent necessity to return these dolphins to the sea as soon as possible if they find them on the shore," the foundation added. "It is fundamental that people help to rescue these animals, because every Franciscana counts now."

It's not the first time reckless selfie-taking has resulted in death. In 2014, a Polish couple visiting Portugal fell and died after taking selfies on a cliff — and that was just one of a similar series of deadly incidents.

And then there are the selfies simply taken in poor taste. Think NBA player Danny Green who took an irreverent snap of himself at Berlin's Holocaust memorial museum; or the numerous passersby who snapped a selfie in front of a 2015 gas fire explosion in New York City that killed two, and were later shamed on a New York Post cover.

Think before you selfie, people.