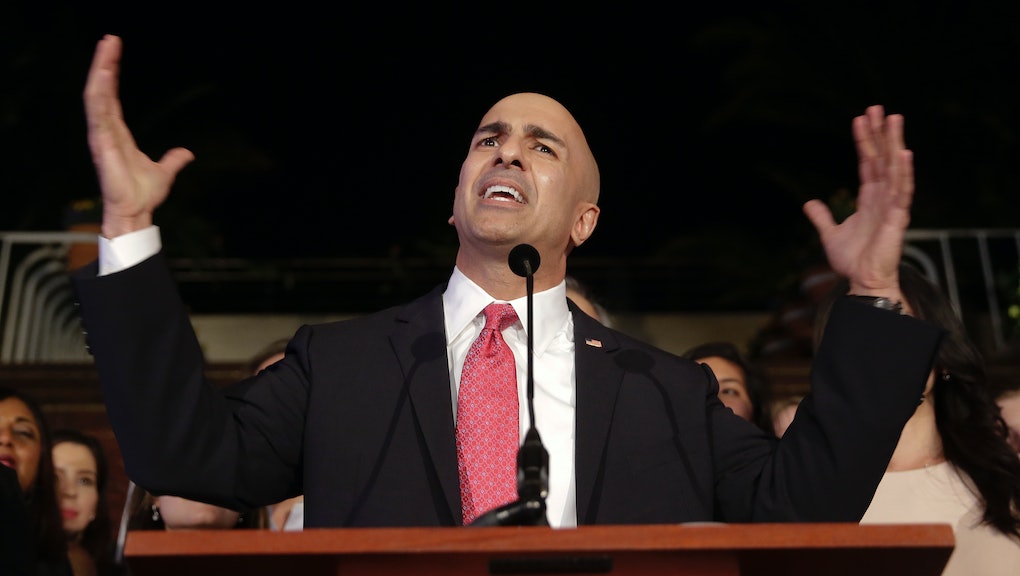 One of the defining policy demands of Sen. Bernie Sanders' self-described political revolution is a mandate to transform Wall Street by breaking up the big banks. That proposal has earned him the favor of some left-leaning economists and progressives who are skeptical of the sheer concentration of power in the financial sector, but it hasn't gained a great deal of traction among mainstream Democratic lawmakers in Washington. His rival for the Democratic presidential nomination Hillary Clinton considers the idea a distraction from instituting new regulatory regimes.

But the idea of breaking up big banks to protect the economy from disaster has gotten a huge boost this week from someone very much on the inside: Neel Kashkari.

Read more: World's Most Famous Economist Says Bernie Sanders Could "Change the Face of the Country"

Kashkari is far from a political celebrity, but his opinion holds a great deal of sway among political elites. He held a number of senior positions at the Treasury Department under President George W. Bush, including assistant secretary of the Treasury, and he ran the bank bailouts, formally known as the Troubled Assets Relief Program, during the Great Recession. He's also not a liberal — he once ran for governor of California as a Republican and is generally enamored of free market thinking. In January, he became the president of the Federal Reserve Bank of Minneapolis, an important role that allows him to play a major role in guiding the nation's policy conversation on regulating banks.

Kashkari gave a speech on Tuesday at the Brookings Institution about regulating Wall Street that's been making waves among policy observers ever since. Kashkari explained how, among other possible solutions, breaking up the banks offers a robust defense against the kind of system-wide shock and panicked bailout process brought on by the recession. It's an important contribution to the financial regulation conversation, and it makes a certain senator from Vermont appear to be a little less quixotic than many members of the political establishment believe him to be.

The problem: In his speech, Kashkari's central argument was that the Dodd-Frank financial reforms that were passed in the wake of the recession were not enough to tackle the larger issue of banks that are too big to fail.

"While significant progress has been made to strengthen our financial system, I believe the [Dodd-Frank] Act did not go far enough. I believe the biggest banks are still too big to fail and continue to pose a significant, ongoing risk to our economy," he said.

Kashkari doesn't see too-big-to-fail banks as the only cause of the recession but considers their centrality to the financial system key to explaining how they wreaked havoc on the mainstream economy. The most serious problem isn't that the banks made mistakes in the run-up to the 2008 financial crisis, but that their mistakes ended up holding the rest of the economy hostage.

"When roughly 1,000 savings and loans failed in the late 1980s, there was no risk of an economic collapse. When the technology bubble burst in 2000, it was very painful for Silicon Valley and for technology investors, but it did not represent a systemic risk to our economy," he said. "Large banks must similarly be able to make mistakes — even very big mistakes — without requiring taxpayer bailouts and without triggering widespread economic damage. That must be our goal."

Since the Great Recession, big banks have grown even larger and more powerful. According to Robert Reich, a public policy professor at the University of California at Berkeley and a former labor secretary under President Bill Clinton, the five biggest banks on Wall Street now hold or control about 44% of the nation's banking assets, compared to 25% in 2000, and 10% in 1990. As the chart below shows, bank assets have consistently concentrated into fewer and fewer hands for years.

Kashkari said he thinks that the drive for regulatory mechanisms like forcing banks to devise "living wills" — plans for how they'd manage bankruptcy in a controlled manner in the case that they run into trouble — are worthwhile but they don't go far enough. He said "there is no simple formula" for determining which banks may be posing systemic risk to the financial system, so he suspects that in a crisis situation where there are broader weaknesses in the economy, policymakers will once again worry about how the failure of one bank could spread to others and trigger a general downturn. Given the fear of such a scenario, Washington is likely to repeat a series of costly and unpopular bailouts, and once again reinforce the too-big-to-fail status quo.

Kashkari likened handling a large bank failure to regulating a nuclear reactor. "The cost to society of letting a reactor meltdown is astronomical. Given that cost, governments will do whatever they can to stabilize the reactor before they lose control," he said.

The solutions: Kashkari offered three different options for dealing with the challenge of too-big-to-fail:

The first is the one that followers of Sanders are familiar with — simply doing away with the existence of big banks altogether. By his lights, smaller banks serve as one of the best safeguards against systemic risk. The other two proposals — turning banks into public utilities and taxing leverage — are by some measures more radical.

These are the kinds of concepts that make many people in the financial sector, whose operations would become smaller in scale and less profitable, pretty uncomfortable. But Sanders' rise suggests that broad swaths of the country think such a move might not be such a bad idea. And as Kashkari's speech makes clear, at least some credible experts on the inside agree: size matters.