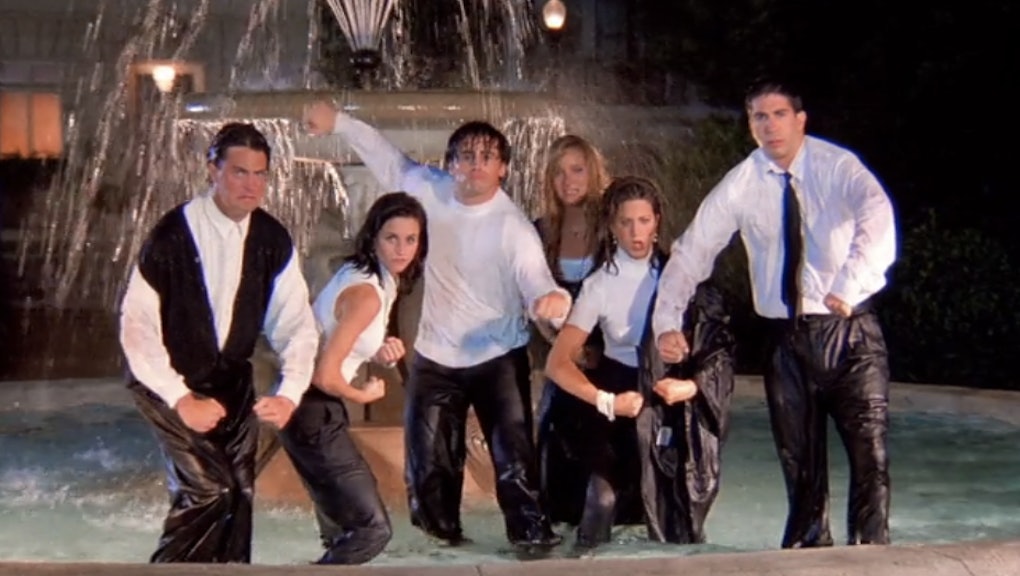 It is a fact of life that during any given moment in a relationship, we're dealing with a situation that has already been the subject of a Friends episode.

Throughout the beloved sitcom's 10-season run, it raised many timeless questions relating to matters of the heart. Is it cheating if you're on a break? Is falling in love with one of your best friends a good idea? Is kissing your best friend's girlfriend really that big of a deal? Could I BE wearing any more clothes?

Read more: The Best Reason to Love 'Friends' Is the One We Never Realized at the Time

Given the imminence of Sunday's Friends reunion on NBC, we figured now was the perfect time to survey some IRL humans about some of the show's most famous and evergreen relationship questions. Using Google forms, we collected survey answers from more than 90 Friends fans, and below is what the court of public opinion has declared.

In season three's infamous "We were on a break!" saga from "The One Where Ross and Rachel Take a Break," Ross hooked up with a rando from the copy shop mere hours after he and Rachel agreed to take a break from their relationship. Rachel thought this was cheating; Ross didn't agree. But what do the people think? Well, they're not too fond of Professor Geller.

In "The One with the Jellyfish," Rachel says her mom advised her not to get back together with Ross due to her theory that cheaters never change. Was she right?

3. What do you do if you develop feelings for one of your best friends?

In "The One with Ross's Wedding: Part Two," Monica and Chandler's NSFW relationship officially begins after they drunkenly hook up during Ross's wedding weekend in England — after years of being good friends! It ultimately works out for them, but is this a dynamic that can ever survive IRL?

4. What would you do if you had a date with a guy and he showed up wearing leather pants?

Ross inexplicably wore a pair of leather pants on a date in season five, in "The One with All the Resolutions." Amazingly, his date was still interested enough in him to initiate a cuddle session on the couch. But what do people actually think of Ross's leather daddy look?

5. Is it ever OK for a professor to date a much-younger student?

Another Ross debacle! In "The One Where Ross Dates a Student," he (absurdly) attempts a relationship with Elizabeth, his 19-year-old student. It didn't work out, largely because she was in a drastically different stage of life than he was — but what do people really think of academic May/December relationships?

6. Hacking into an ex's voicemail/email/phone: No big deal, or totally inexcusable?

Monica fell into a serious voicemail-hacking spiral in season three in "The One Where No One's Ready" after obsessing over a message on her machine left by ex-boyfriend Richard (as played by the manly, mustachioed Tom Selleck). Some might call this behavior invasive and troubling, but let's be real — most of us have done some post-breakup prying at one point or another, if the results of our survey are any indication.

7. Is there really a "lobster" for everyone?

"It's a known fact that lobsters fall in love and mate for life," Phoebe declares in season two's "The One with the Prom Video." "You can actually see old lobster couples walking around their tank, holding claws." This makes sense in Phoebe-land, but are we all really just out there looking for our one true crustacean?

8. What do you do if you catch your friend kissing someone you've been dating?

This was the question Joey is forced to answer in season four in "The One Where Chandler Crosses the Line," after Chandler confesses to kissing Kathy, whom Joey was dating (though not exclusively!) on a casual basis. Joey gets pissed and sentences Chandler to six hours trapped in a large box as punishment. According to our survey, people apparently think this is an awesome idea.

Monica subverted gender norms in the v. emotional Season 6 finale, "The One with the Proposal: Part Two"! It was a beautiful moment, even though Chandler immediately stole her thunder and proposed himself. In this ultra-progressive age, we wanted to know: What do people really think about gender-reversed proposals?