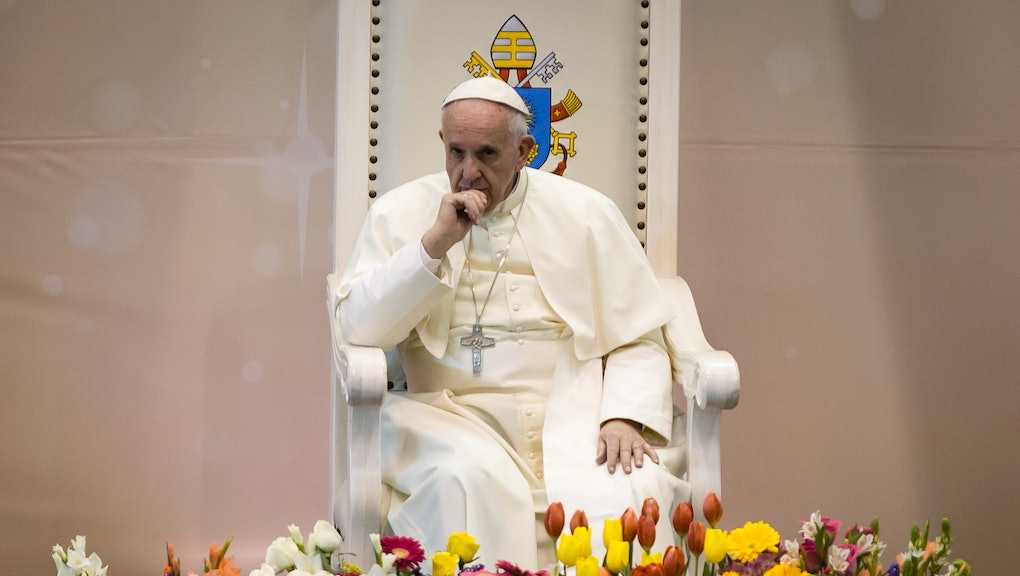 Pope Francis leveled harsh criticism on Republican presidential frontrunner Donald Trump on Thursday, suggesting that Trump's vocal support for a wall along the United States-Mexico border renders him "not Christian."

"A person who thinks only about building walls, wherever they may be, and not of building bridges, is not Christian. This is not the gospel," the pontiff said aboard a return flight from Latin America, according to CBS News.

Still, the pope would not wade into the dicier question of whether Catholics should vote for Trump.

"I am not going to get involved in that," Francis said. "I say only that this man is not Christian if he has said things like that. We must see if he said things in that way and I will give him the benefit of the doubt."

Responding to Trump's criticism that the pope was "very political" and his visit to the U.S.-Mexico border made him a tool of the Mexican government, the pope embraced it.

"Thank God he said I was a politician because Aristotle defined the human person as 'animal politicus.' So at least I am a human person," he said. "As to whether I am a pawn, well, maybe, I don't know. I'll leave that up to your judgment and that of the people."

Trump responds: Stumping in South Carolina, Trump doubled down on depicting Francis as an agent of Mexico.

"So the Mexican government fed the pope a tremendous amount of stuff about Trump is not a good person. And the pope just — can you imagine? I just got a call, as I'm walking up here," Trump said. "They said, Mr. Trump, the pope made a statement about you. I said, the pope? What did the pope say? I like the pope. I mean, was it good or bad? Because if it's good, I like the pope. If it's bad, I don't like the pope."

Trump went on to tout his history of employing Hispanics, saying, "I have great relationships with Hispanics."

In a written statement, Trump was even harsher.

"For a religious leader to question a person's faith is disgraceful," the statement said. Trump, a Presbyterian, added that he was a "proud" Christian and called the pope a Mexican "pawn."

It wasn't the first time the billionaire had chided the pope for wading into politics.

Saying that he still liked the leader of the world's Roman Catholics, Trump said in August that the pope was "very political" in his preaching against the excesses of capitalism. Trump said he would "scare" the pope by highlighting larger threats like the Islamic State terrorist group, also known as ISIS.

"I'd say ISIS wants to get you," Trump told CNN at the time. "You know that ISIS wants to go in and take over the Vatican? You have heard that. You know, that's a dream of theirs, to go into Italy."