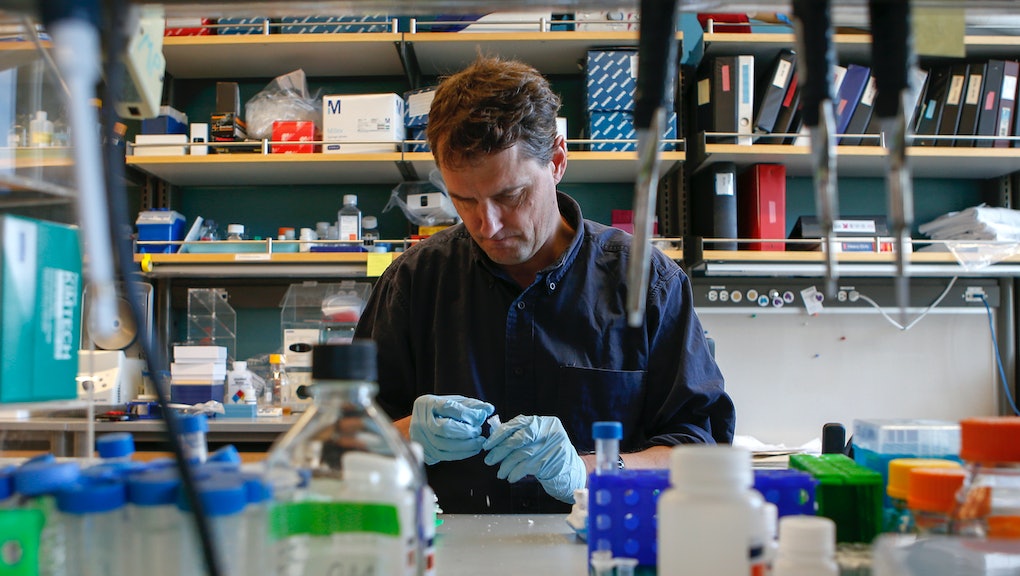 The Future of Cancer Treatment Is Here, and It's Really Saving Lives

One-year-old Layla Richards was going to die. It was June 2015, and an extremely aggressive cancer called acute lymphoblastic leukemia had charged through her body, despite traditional treatments like a bone marrow transplant and chemotherapy. With no other recourse, Richards was given a vial of genetically engineered cells that would, hypothetically, kill the cancer.

Months later, she was in remission. Today, she continues to live healthily at home with her parents in the U.K.

It's the first success of its kind in the field: Human leukemia was killed by lab-engineered immune cells.

At the American Association for the Advancement of Science Annual Meeting, held over Presidents Day weekend, a team of researchers from universities around the world provided evidence that genetically edited immune cells can hunt down cancer, beat the crap out of it and disappear without wreaking havoc on the patient's body. It was called extraordinary. It was called unprecedented. And it will probably be the future of oncology, if it can go from clinical trials to market.

To explain how it works, let's start with French biopharmaceutical company Cellectis, and how it saved the life of Layla Richards last summer.

The True Story of a Life-Saving Breakthrough

At the New York outpost of Cellectis, 15 scientists — supplementing the company's 100-person team in France and 20-person team in Minnesota — grow gene-edited immune cells, called CAR, or chimeric antigen receptor, T-cells. To create them, Cellectis uses a gene-editing technology called TALEN, which is from the same family of gene-editing techniques as the widely publicized CRISPR/Cas9.

In your body, a T-cell sniffs out things that don't belong in your system, then kills them. But Layla Richards didn't have any T-cells. It's possible to inject outside T-cells into the body, but there's a big problem: a scenario called graft-versus-host disease, or GVHD, which is similar to when your body rejects a transplanted organ. With GVHD, when the outside T-cells come in, everything around them looks like an intruder to your body, so the cells start attacking everything, multiplying exponentially and tearing your body down from the inside, like an army that constantly clones itself in the middle of a battle.

Because of GVHD, blood cancers like leukemia are often hopeless diagnoses. Cellectis changed that.

First, Cellectis extracts healthy T-cells from donors. Instead of just injecting them straight into a cancer patient, scientists use TALEN to destroy the T-cell receptor, or TCR, which would normally be working hard to sniff out "nonself," or intruder cells. Then a CAR is put in its place. Voila: You have what's called an engineered CAR T-cell. These "blind" CAR T-cells are universal, meaning they can go into any body without causing problems for the host.

Instead of attacking what it would usually see as enemy cells, those genetically engineered CAR T-cells kill the cancer without harming the host. The new cells are like Green Berets sneaking into a foreign land, neutralizing the target and sneaking away with no civilian casualties.

When the cells are put back into patients after being genetically edited, they immediately spot the cancer cells, fire on them and multiply to kill more cancer cells. "It's as if you put a warhead inside the T-cell," André Choulika, CEO of Cellectis, told Mic. "The cells can melt down two pounds of tumor cells in two weeks."

Despite all the progress made with gene editing and its huge potential, many are still skeptical or frightened of the science; gene editing makes them think of the "Tomacco" episode of The Simpsons. But what you need to know about TALEN is that it falls under the category of gene editing, not gene therapy. Gene therapy involves adding new foreign matter to a cell, the same process involved in traditional genetically modified foods. Gene editing means you change out a bad or ineffective gene, fixing the problem by going right to the DNA.

"It's like you have a flat tire on a car," Choulika told Mic. "Gene therapy is putting a fifth wheel that would allow you to move the car. Gene editing is replacing the flat tire."

Cellectis now has a freezer full of vials of edited T-cells, ready to treat cancer patients. But there's a lot that could prevent the drug from reaching them.

"The cells can melt down two pounds of tumor cells in two weeks."

First of all, Richards' case was unique. The vial of cells doctors used was approved by an ethics committee for this specific use, not for every case hereafter. And it was a compassionate-use situation, meaning the 1-year-old had no other options.

Moreover, the road from phase-one clinical trials (in which Cellectis is now) to market is long and full of potholes. The universal T-cells need to be trialled on a series of different patients to find the highest doses that can be used. If the successful results of Richards' case can be reproduced reliably, only then can the edited T-cells be shown to a regulatory board like the Food and Drug Administration.

Choulika's team accomplished something massive: It injected genetically edited cells into an infant and wiped out her tumors. But that's not all gene editing can do.

"With gene editing, you can help people with cystic fibrosis or muscular dystrophy," Choulika told Mic. "You can clip the virus out from the genome, chop out HIV that's integrated in your genes."

Gene editing could be the new frontier in not only oncology, but other medical fields. Which is why, as Professor Dirk Busch, a research leader from the Technical University of Munich who presented at AAAS 2016, pointed out the growing interest from both the academic and industrial communities. Case in point: the recent $300 million partnership between pharmaceutical magnate Bayer and gene editing startup CRISPR Therapeutics.

A race both to lead the way on this research and reap its lucrative benefits means one thing: We're on the cusp of discovering an indomitable, futuristic medicine to fight cancer, one of humanity's greatest natural scourges — and it was born in a petri dish.