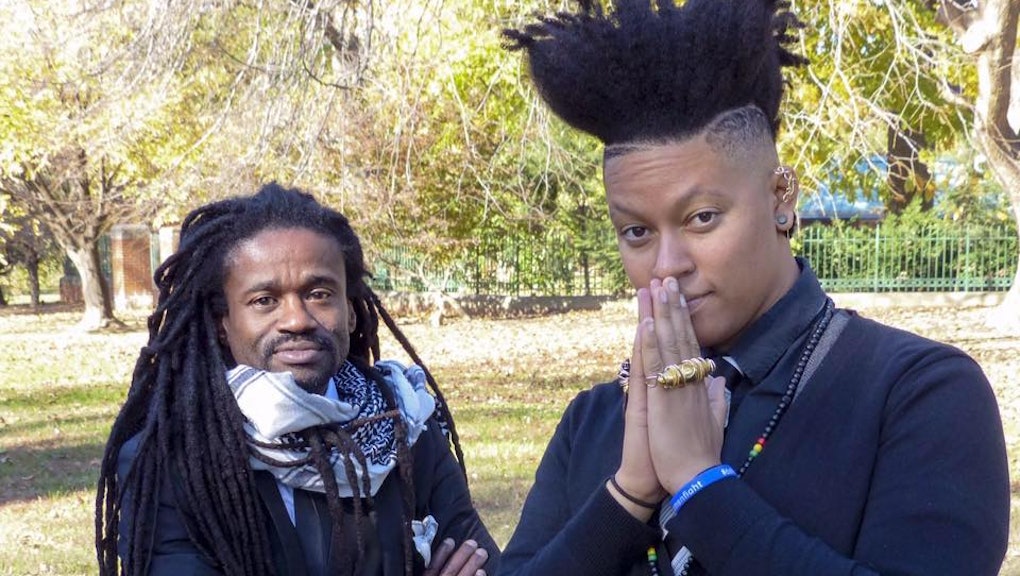 Rev. Sekou & the Holy Ghost Offer Music to Heal to With 'The Revolution Has Come'

The world has always needed healing music. It's sounded different every decade, but it's always shared similar elements: simple songwriting, honest lyrics and a performer with a spiritual need to sing. The Rev. Osagyefo Sekou, a prominent St. Louis pastor, writer, organizer and now musician, understands this poignantly.

"Music, I like to think of it as medicine — it can heal us," Sekou told Mic, discussing his debut, Rev. Sekou & the Holy Ghost's The Revolution Has Come. "Ferguson gave me the blues and I needed to sing."

Sekou was on the ground in Ferguson, Missouri, for the early days of the Black Lives Matter demonstrations in the city in August 2014. He's still facing several court cases for the actions he took part in, though he beat one earlier in February for "praying while black," as the Huffington Post described it. His "Holy Ghost" and close collaborator, Jay-Marie Hill, a genderqueer woman of color, activist and musician, has similarly made her presence felt in demonstrations from Cleveland to Oakland, California. Their black liberation activism bleeds from every groove in the record.

"I just want to hear Sandra Bland say, 'Well done,'" Sekou sings on "Heaven," talking about what he wants to hear when he reaches the pearly gates. "I wanna hear Michael Brown say, 'Well done.'"

The lyrics are current, but the album's mixture of gospel, blues, funk and soul — all genres that have been used to channel black pain and protest throughout history — makes The Revolution Has Come literally a timeless record. It helps broadcast the truth that today's Black Lives Matter movement is a thin, but vital sliver of time in a much longer history of racial strife.

The Revolution's humble origins: Sekou and Hill met in the streets, and the album is informed by their experiences there. In July, both attended an action that took place following a Movement for Black Lives conference at Cleveland State University. Police attempted to detain a 14-year-old boy for "sitting while black," as Hill described it.

When protesters locked arms, chanting Kendrick Lamar's "Alright" in attempts to steel their resolve, police responded with bursts of pepper spray. One hit Hill, sending her to a nearby milk tent where Sekou was helping protesters rinse their eyes, hands and faces. The two didn't talk much then, but when they met again at an action in Oakland, the moment they shared helped them strike up a dialogue.

"I'm sorry, I wash pepper spray off a lot of people," Sekou told Hill when he didn't recognize her. They got to talking and she told Sekou she played music. A day or so later Sekou visited Hill at her home to hear it. "She played 'Past Time' for me, it was in an infancy at the point, and it made me cry," he said. "Then we sat and wrote 11 songs over a period of six days."

"I really did make him cry," said Hill, who described their meeting and the whole act of creating the album as holy. "But beyond that, I think that so many of us surviving the crackdown on black lives — some for just being born — there's something holy about that too. As a queer person, gender-resistant, gender-rejecting person, the fact that I'm surviving and trying to help my friends, trans women, other fem folks survive — that feels holy too."

"Past Time" plays out as a fiction conversation with Lamia Beard, a trans woman of color killed in January 2015. "Stranger, it's past time to love me," Hill sings. "Because my time has come too early."

So many lines on the album have these self-contained, anthemic qualities, which Sekou explains as "an archaeological attempt to render the genius of the young folks in the street."

"Every social movement has had a soundtrack," he said, explaining how in the '90s it was mostly spoken word, led by people like Saul Williams and Staceyann Chin. "If the people on the move, music gonna be on the move."

Yet the music also has a staying quality. Hill hopes that beyond pushing people and the movement forward, it can also allow listeners a moment of serenity and pause.

"Not only do we want you listen to it, but we hope that you carve out a time to sit and listen to it, not to only to be rejuvenated by our music, but for yourself because you deserve that," Hill said. "Whether you're black or brown or white or whatever, this is music we all need. Because we've all been going, going, going — not only because it's an election year and we're all trying to survive under capitalism — we've all been trying to figure our place and how to support everybody. There comes a time when you need to lay our heads down and rest, sitting and taking a deep breath."

"The album is 45 minutes," she continued, outlining her prescriptions for this holy medicine. "Take the 45-minute break, breathe, and the next day I hope you do something you never thought you could've done."