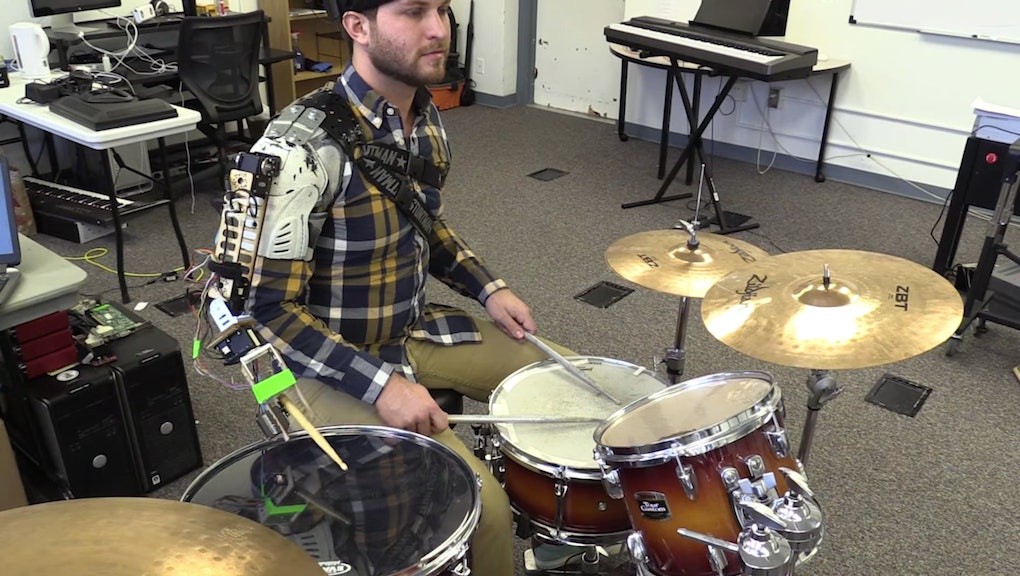 3-Armed Cyborg Drummer Is Like Travis Barker on Steroids. That's Not Even the Cool Part.

The medical assistant of the future might be here — and it's thanks to a robotic drumming arm.

Georgia Tech professor Gil Weinberg, director of the school's Center for Music Technology, created a robotic limb that gives drummers a third arm. But instead of being a prosthesis for missing limb, like Weinberg's last project, this is an independent limb with a mind of its own.

As Weinberg explained to Mic, the "smart arm" is outfitted with proximity sensors, inertia sensors, an accelerometer and microphones, so it can sense the speed, volume and whether the beat is dense or sparse.

It builds an algorithm based on what it detects as if the arm were an independent musician. "The technology gets the arm to the right location, avoids obstacles and plays the drum in a way that is expressive," Weinberg told Mic. "The sensors move the arm to the right place, and the music analyzed tells the arm what to play."

As is, the arm is sort of clumsy. It reads the motions slowly; it adds to rhythms late. It's like you have a third limb, sure, but a third limb that sucks at drumming. Just like any artificial learning program, it will probably take time to learn the body and anticipate motions, much like a regular drummer just starting out.

Of course, the best use for this arm isn't creating a cyborg drummer. It isn't even music. This thing could be used to save lives.

"Imagine if a surgeon had a third arm," Weinberg told Mic. "It knows where the patient is in proximity to the doctor, and it learns what he needs and brings it to him."

It could be industrial too. Imagine a third arm that learns how to paint a wall by watching its wearer, then assists. Or maybe it hands a mechanic a wrench. Or, hey, why not have it hold up that stupid Ikea headboard while you hammer in those wooden pegs to keep it together. A third arm can do a lot of things. And with the right support and vision, it could do even more.

"The ideal smart arm knows human intention, and it could be modified to work in these other places," Weinberg told Mic. "The third arm sees what you're already doing, and enhances it."