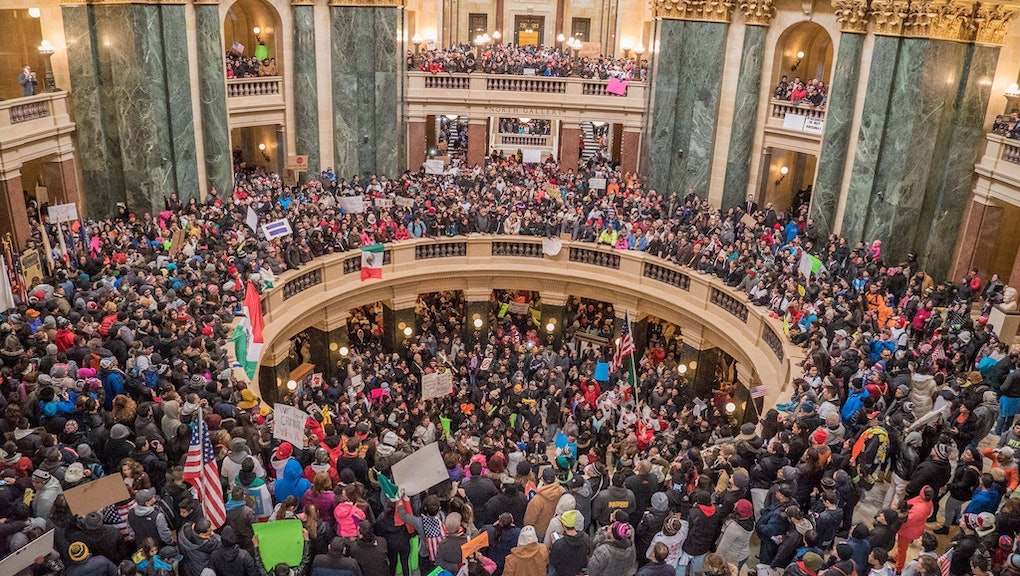 Can you imagine what would happen if the 55 million U.S. Latinos just up and disappeared? Latinos in Madison, Wisconsin, attempted to answer that question at the city level for a "Day Without Latinos," which protested a pair of bills that demonstrators said is anti-immigrant and anti-Latino.

Thel protest asked Latinos to walk out of their jobs for one day to demonstrate against two bills — Assembly Bill 450 and SB 533. Assembly Bill 450 bars the creation of "sanctuary cities," where police officers are not allowed to ask people their immigration status. SB 533 prohibits cities from giving photo IDs to those who are not eligible for state IDs.

This directly counters a recent Milwaukee, Wisconsin, law that sought to give local-level photo IDs to homeless and undocumented persons.

The Madison Police Department told Fusion that an estimated 14,000 people congregated in front of the state's capitol building and that no arrests occurred. "It's a very, very peaceful crowd," the official told Fusion. "Lots of families there with children."

Organizing group Voces de la Frontera put the estimate at closer to 50,000 people throughout the day, including people outside and inside the capitol building.

"Thousands of workers and students struck and hundreds of businesses closed throughout Wisconsin to say no to laws that criminalize immigrants," the organization wrote on its Facebook page.

Businesses saw harm in these bills too.

Wisconsin, known for its cheese, relies on Latinos to make its signature export — 90% of workers in the state's dairy industry are Mexican immigrants, according to the Milwaukee Journal-Sentinel. One dairy farmer told the Journal-Sentinel they had reached an agreement where some workers would be allowed to attend the rally with a full day's pay so that some could stay behind and continue production.

"[The bill] disturbs me very much because my employees are very welcomed," the farmer, Don Niles, told the Journal-Sentinel. "The vast majority of my workforce, with the exception of my family and two other people, are all from outside the United States originally."

Restaurants joined in as well.

"Quivey's Grove will be closed all day Thursday, February 18th, as all of our Latino employees will be participating in 'Dia Sin Latinos' or 'A Day without Latinos,'" one Wisconsin business wrote on its Facebook page.

Another restaurant, Graze, closed for the lunch hours to allow workers to protest.

Many shared pictures and video from the protest on Instagram.

Aside from "#daywithoutLatinos" many used the hashtag "#wisconsinnoesArizona," Spanish for "Wisconsin is not Arizona." That's because the two bills, particularly Assembly Bill 450, remind Wisconsin Latinos of Arizona's famous "papers please" law, SB 1070, which put immigrant communities and police officers at odds by requiring all police officers to ask people for proof of documentation during interactions. The Supreme Court struck down many parts of SB 1070, except the "papers please" provision, in 2012.