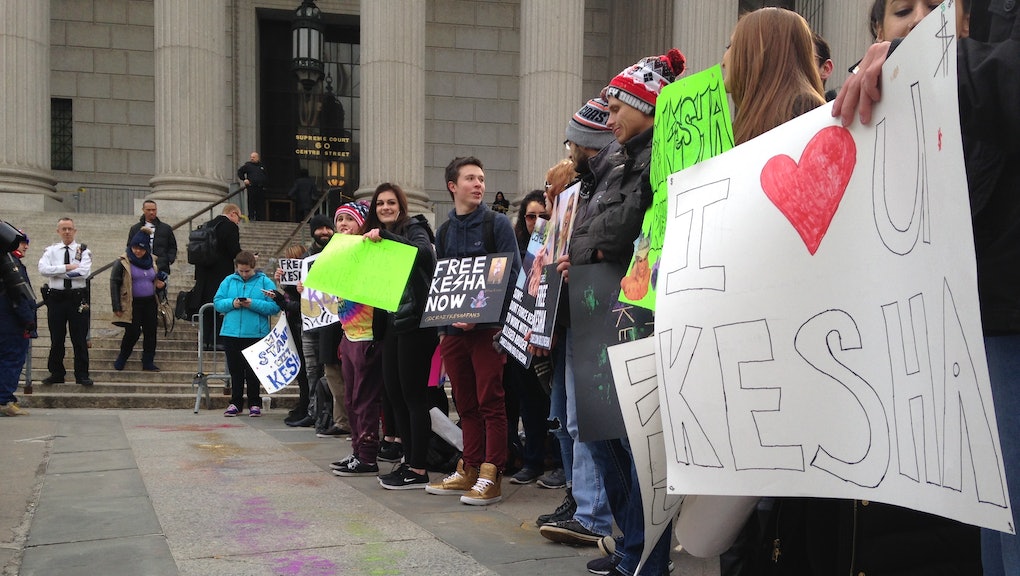 Dozens Gather Outside of NYC Court to #FreeKesha, Which Refused to Grant Her Freedom

NEW YORK CITY — A group of 60 to 100 protesters added some welcome color to Manhattan's Financial District in New York City on Friday morning. They had gathered to demand freedom for Kesha Rose Sebert, who has been locked in a struggle to break her contract with her producer Lukasz "Dr. Luke" Gottwald for years. Kesha's lawyers have accused "Dr. Luke sexually, physically and verbally abused Ms. Sebert for over a decade in order to make her feel completely worthless and maintain complete control over her life."

"Glitter the path for Kesha!" one of the protesters called shortly before Kesha arrived at the New York County Courthouse. "The queen needs to walk on glitter!"

A girl wearing a tie-dyed Free Kesha T-shirt answered the call, spreading glitter back and forth across the path leading up to the courthouse. She also threw some into the crowd, which was already thoroughly bedazzled and determined to make sure Kesha felt comfortable and supported going in to face her alleged abuser.

Unfortunately, she wasn't given her freedom back Friday.

Reporters inside the courtroom indicated that the judge wasn't sympathetic to Kesha's case. According to the Hollywood Reporter, the judge denied Kesha's preliminary injunction, which would allow her to record outside of Dr. Luke's purview. However, he hasn't dismissed the case outright.

The @KeshaToday twitter, run by Michael Eisele, 18, who organized the protest and started the #FreeKesha hashtag, reported the judge "couldn't make a decision today. The verdict is TBA in writing." The Hollywood Reporter elaborated on this account saying the judge is reserving his decision to dismiss for a later date, and may give Kesha an opportunity to file an amended version of her case in the meantime.

It's not any entirely hope-crushing decision — and it will likely do little to dampen her fans' passion, which was on grand display outside of the courtroom.

"It's been three years in the making, watching this unfold in front of me is just ridiculously exciting," Eisele told Mic. "It's definitely more magical than I expected, look at the glitter path, look at all the color. This is not what I was expecting. It's much more."

Protesters came from as far away as South Dakota, Philadelphia and Maine to demand Kesha's freedom.

"I'm here today in support of not only Kesha, but the progression of human rights and musicians' rights as well," said Michelle Martin, 19, holding a sign that put Kesha's abuse in the context of other recent abuses in the entertainment industry, specifically those perpetrated by Bill Cosby and Kim Fowley.

"Kesha's always represented freedom of expression, which has made this case so much more unfair," she said. "If she wins today, it will mean reform. In a world where so many people can get away with so many injustices, something needs to change."

Kesha first spoke out against her abuse in a suit filed in October 2014. It alleges Dr. Luke had slipped her GHB claiming they were "sober pills," had raped her and emotionally and verbally abused her since the beginning of their working relationship.

"It leaves such a bad taste in my mouth," Ana Wilhelm, 18, told Mic of the music she loved. "I partied to that music; I sang to that music; I love that music. To think that all this was happening shows you can't know everything that's going on. It makes you wonder who else is going through this, all over."

There have been a number of other revelations of abuse coming to light recently. In January, Amber Coffman shared a story of being sexually harassed by music publicist Heathcliff Berru on Twitter. It sparked an flood of similar stories of assault, harassment and abuse from other musicians and industry people that forced Berru to resign as CEO of his company Life or Death PR.

In December, Lady Gaga opened up about her claims she was raped at 19 by a record producer as she was starting out in the music industry. She released a song, "Til It Happens to You," dedicated to victims of sexual abuse. She hasn't shared the name of her abuser.

"Hopefully, this will allow others to come out and speak about their experiences," Evie Scott, 16, told Mic. "For example, Dr. Luke is a very powerful producer in the industry. A lot of people who many have similar stories are likely scared to come out because of what'll happen."

The fans aren't trying to think about what happens if the hearing doesn't go well. Broadcasts from inside the courtroom reported show the judge wasn't exactly sympathetic to Kesha's case, and the @KeshaToday twitter reports the judge "couldn't make a decision today. The verdict is TBA in writing." The Hollywood Reporter confirmed this account saying the judge is reserving his decision for a later date, and may give Kesha an opportunity to file an amended version of her case in the meantime.

Eisele is determined to continue the fight no matter what.