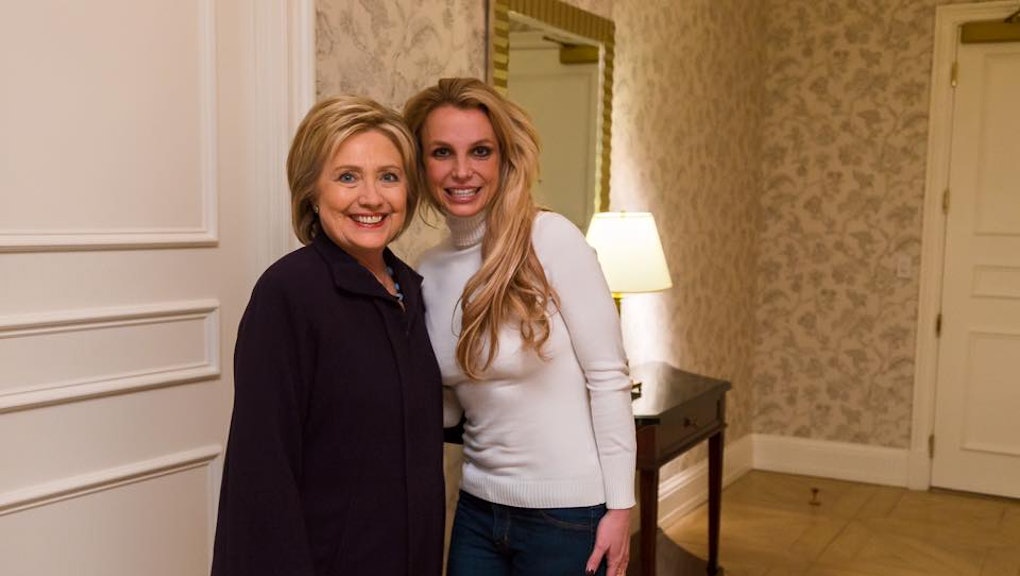 She's not a girl, and she's not yet the first woman president — this is what happens when Britney meets Hillary.

Hillary Clinton has received plenty of impressive endorsements over the course of her presidential campaign — from Planned Parenthood to the mayor of Flint, Michigan, to, of course, her official songstress Katy Perry. But on Friday, the candidate received the ultimate endorsement: Queen Britney Spears.

"Being in Vegas for #PieceOfMe is amazing for so many reasons," Spears wrote on her Facebook page. But perhaps the most amazing of all was "the incredible opportunity to meet Hillary Clinton."

The candidate is "such an inspiration and beautiful voice for women around the world," Spears added. "This woman had an intense presence and I felt very honored to meet her!"

Considering that both women are undeniably comeback queens, and no strangers to sexist media scrutiny, the endorsement makes sense. And the over 86,000 fans who liked Spears' post suggest they agree — and could perhaps help Clinton's polling numbers, since Bernie Sanders is closing in on her national lead, as the Washington Post reported Thursday.

It's clear that both of these women are lucky — one might even call them stars.

Update: There's been some drama about her removing the #ItsOnHer hashtag on the pic - so it's not really clear if this is a real endorsement. Either way - great pics!