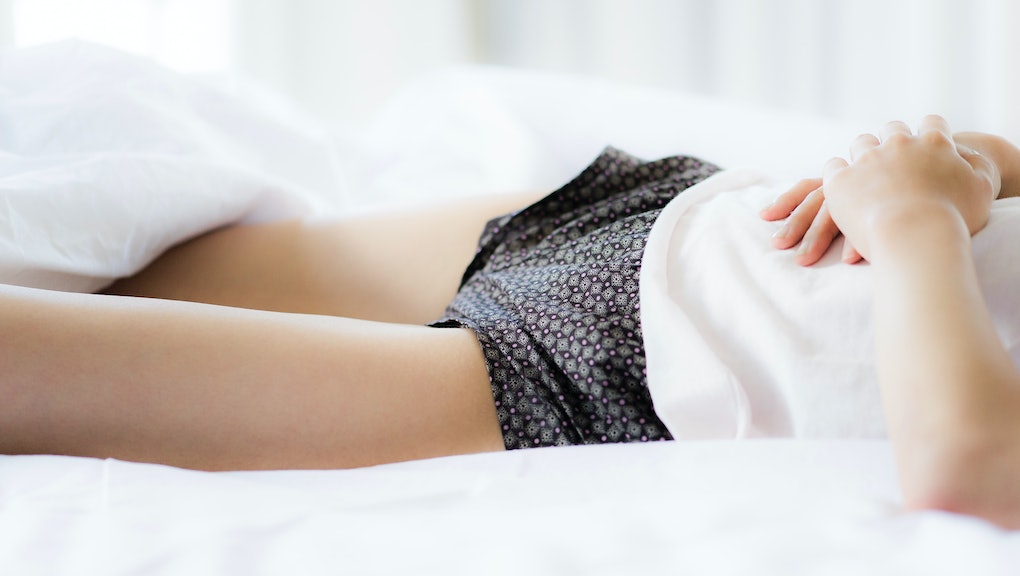 Should Your Boss Be Giving You Time Off for Your Period?

Periods are natural and normal. They can also really suck.

More than half of people who menstruate suffer from varying levels of pain during their periods, with one in 10 women experiencing cramps that are so debilitating, they can't perform typical daily tasks — including their jobs. Depending on where they live, though, those who experience the harshest period symptoms, known as dysmenorrhea, might not have to worry about work; they can take a few days of menstrual leave.

On Sunday, Anhui province in China became the latest municipality to institute a menstrual leave policy, with new regulations that will allow workers up to two days off for difficult periods. The policy is similar to those already in place in the provinces of Shanxi and Hubei, and allows people who menstruate to leave work after presenting a doctor's certificate. It's a step forward in terms of recognizing dysmenorrhea as a legitimate medical condition — at least in theory.

According to CNN, the policy might be difficult to enforce, as it doesn't specify which employees or industries qualify for menstrual leave, nor does it stipulate what will happen to employers who don't let workers take time off. Additionally, finding a physician willing to provide a doctor's note is easier said than done, especially for the migrant workers most likely to need to take advantage of the new policy.

While China's policies aren't perfect, they also aren't new: As the Atlantic reported, Japan has offered "physiological leave" for people who menstruate since 1947. It was followed in 2001 by South Korea, where men's rights activists have challenged the policy; Indonesia, where women have reportedly been told to undergo an examination to "prove" to their employers that they're indeed menstruating; more recently in Taiwan, politicians pushed to guarantee three days of menstrual leave a year, in addition to the time already allotted for workers.

In the United States, the idea to institute a similar policy isn't unheard of but it's certainly not popular. In keeping with Americans' propensity to work far more than other industrialized nations, leave policies in general are hotly debated, not to mention not guaranteed.

"In a country where we're not even thinking about paid parental leave, the idea of paid menstrual leave seems impossible," Allyson Downey, a writer on work leave policies and co-founder of weeSpring, a social media network for parents, told Mic. "I think bigger priority really needs to be around enabling employees to have more flexible work-life schedules. It doesn't have to fall under banner of menstrual leave; a woman should be able to work from home without talking about it in the context of her period."

Additionally, leave policies that apply only to certain groups of people (i.e. women) who experience certain conditions (i.e. menstruation or pregnancy) tend to be viewed even more harshly by employers and colleagues. "If something gets labeled as 'menstrual leave,' I'd worry about how that affects a woman's standing in the office — about people saying, 'Why can't you buck up?'" Downey said.

Indeed, some argue that menstrual leave policies are infantilizing to women and can reinforce damaging stereotypes. After all, if people still believe that women are too irrational and hormonally driven to become president, instituting menstrual leave might very well continue to reinforce that myth.

That said, for those women who struggle with dysmenorrhea, a menstrual leave policy could be a way to validate their experiences, not to mention protect their jobs if they are genuinely unable to work.

"It's important to acknowledge that for some women dysmenorrhea is a real issue," Dr. Raegan McDonald-Mosley, chief medical officer at Planned Parenthood Federation of America, told Mic. "For some women it's not an issue. But we don't want to dismiss it as being in a woman's head...or impeding daily living. Although it's part of normal physiology, [menstruation] can be extremely debilitating."

It's possible to acknowledge that period-associated issues, from abdominal cramps to migraines, leave some people incapacitated, McDonald-Mosley said, "while not stigmatizing and pathologizing being a woman."

In real life, however, a menstrual leave policy could prompt employers to willfully avoid hiring women, for fear they'll be on their couches with a heating pad for half a business week every month.

"If people were taking menstrual leave on a monthly basis," Downey said, "I can imagine even I would hesitate — and I'm a feminist who tries to eliminate bias in my own hiring decisions." The same sorts of bad faith assumptions about women's abilities also come up in debates about pregnancy leave, she added.

Such debates require a more nuanced understanding of reproductive health than most employers — and much of society, for that matter — typically have. For many people, menstruation is much as Rebecca Traister described pregnancy for the New Republic last year: "It is not a physical handicap...women are not rendered, by dint of their suddenly obvious femaleness, incapable of doing their jobs well. Except when, sometimes, they are."

In some circumstances, menstrual leave policies could indeed be helpful to women, not to mention they could serve as an acknowledgment that for many, painful periods are a genuine medical condition. But, given the general hostility to women's health in the U.S., it's likely a menstrual leave policy would either be rejected outright, or used as a tool of additional sexist discrimination if it were ever enforced.

"Menstruation and problems associated with it are disruptive, but there are plenty of other things that disrupt people as well," Downey said. "I would love to see a way of talking about this in the U.S. where it's not a women's issue, but an issue of employee health in general. We need to find a way to empower people to make work, work for them."