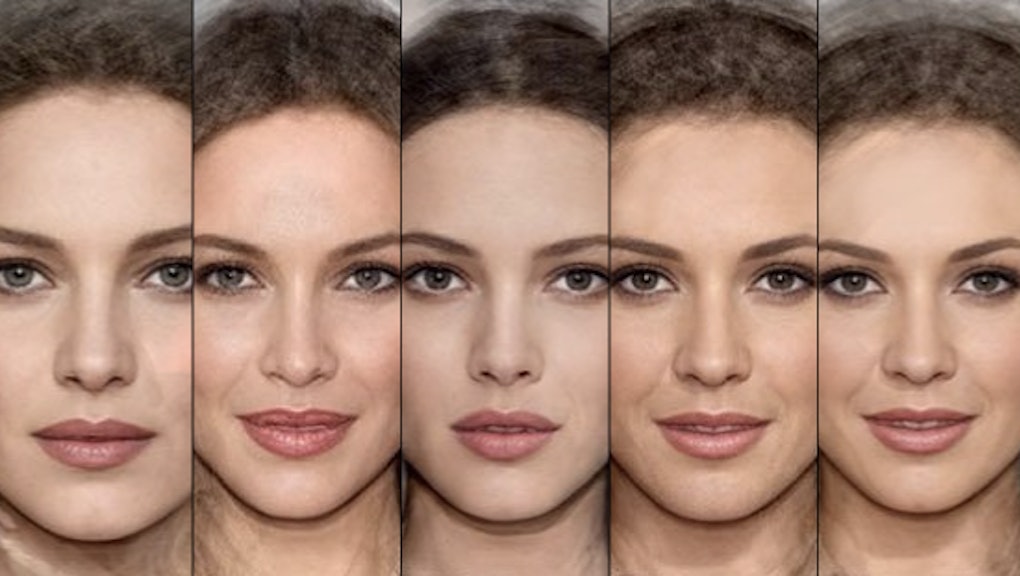 Beauty Ad Models Are About as Diverse as 'Bachelor' Contestants, Says This Study

Few would argue that there's not enough diversity in media and advertising, but even fewer could have guessed it was this bad.

Design firm Canva took the faces of models from some of the beauty industry's biggest brands and created a composite representing the average face for each brand. The results were uncanny — which is to say they all look almost exactly alike.

Read more: Here's What the Ideal Man Looks Like in 19 Different Countries

On the firm's site, Canva's designers explain that while they couldn't capture every spokesperson for all the brands, each average is a mashup of at least 10 different faces.

"Many facial features remained somewhat consistent across the board — facial structure, lip and eye shape, eyebrow curvature, and nose width were all stunningly similar," reads the project explanation. In other shocking news, high cheekbones, defined jawlines and pink lips also made the cut across the board.

The closest thing to diversity is the composite for Proactiv's male spokesmodels — for obvious reasons. Ms. Proactive, however, bears no notably-distinguishing features.

Canva's also created composites of the models representing five other industries: car insurance, clothing, electronics, food and beverage and retail. Their project echoes Perceptions of Perfection, a two-part series of photos a group of doctors had Photoshopped to represent female and male ideals of beauty across the globe.

Canva's message, while similar, is less about the variation of beauty standards and more about stubborn persistence of a single definition of beauty.

The designers concluded, "While American standards of beauty are constantly changing as society shifts and evolves, the aesthetic draw of brand models remains a constant facet of effective advertisement and provides an interesting look at the perspectives of marketers and their take on their American consumers."