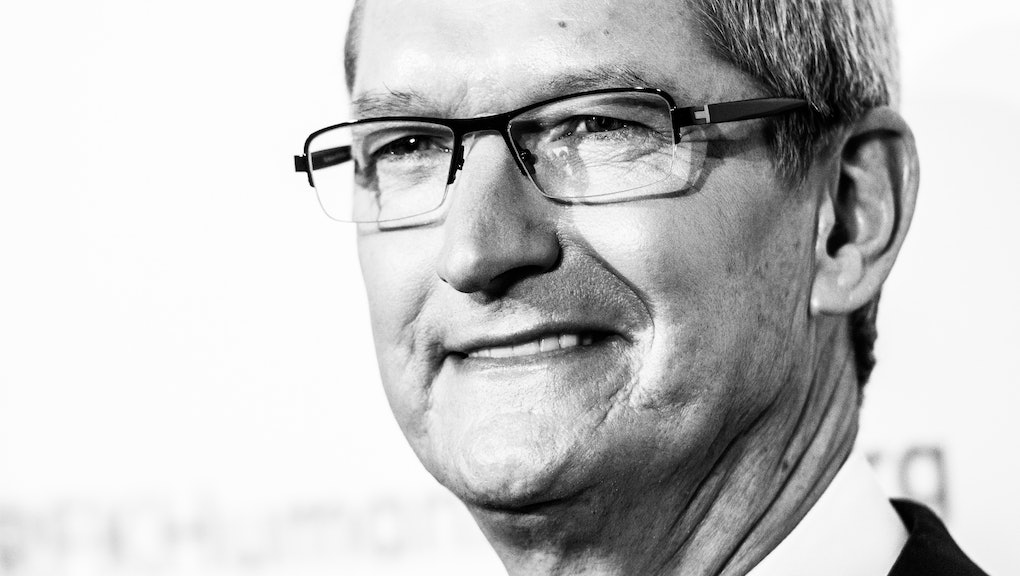 Apple CEO Tim Cook is only getting started in his very public battle with the FBI over user privacy.

Cook has been at the center of one of the biggest stories in tech, thanks to a court order that asked Apple to provide the FBI with tools to weaken the security lock on an iPhone belonging to Syed Rizwan Farook, one of the gunmen involved in a mass shooting that took place in San Bernardino, California, in December.

The CEO refused. After releasing an open letter to the FBI last week, Cook then published a customer FAQ Monday morning explaining Apple's position and why the FBI's request has "important and dangerous implications" beyond this particular case.

"Specifically, the FBI wants us to make a new version of the iPhone operating system, circumventing several important security features, and install it on an iPhone recovered during the investigation," Cook wrote in the open letter. "In the wrong hands, this software — which does not exist today — would have the potential to unlock any iPhone in someone's physical possession." The result, according to Cook, is that this would put Apple's customers at risk. The FBI has countered that it's only asking for tools to unlock one specific iPhone, not a permanent backdoor into iPhones at large.

In the FAQ, Cook dismisses this notion: "The FBI may use different words to describe this tool, but make no mistake: Building a version of iOS that bypasses security in this way would undeniably create a backdoor. And while the government may argue that its use would be limited to this case, there is no way to guarantee such control."

Rather than battling the government behind closed doors, Cook is using his role as the head of the most valuable company in the world to shape the outcome of a major legal, political and ethical issue. But this is not the first time the CEO has been vocal on issues within the public interest.

Outspoken actor: "I think we're seeing something kind of unique," Michael Cusumano, co-author of Strategy Rules: Five Timeless Lessons From Bill Gates, Andy Grove, and Steve Jobs and professor at the Massachusetts Institute of Technology, told Mic. "When the CEO of Apple speaks, people listen. I think that it is the same for Google or Microsoft or GE. But you don't find those CEOs speaking out very much. He's got a sharper edge to him than I think we thought he had."

There's no doubt that chief executives of other major companies have the power to change policy through lobbying and forming relationships with legislators. But to curry favor with the public is an altogether different kind of power — one that stands to be even greater.

In March 2015, Cook wrote an op-ed in the Washington Post that drew the nation's attention to legislative measures that were being considered in 24 different states that would allow businesses to evade discrimination laws if it was a part of their religious beliefs to do so. For instance, enabling a pizza shop owner to refuse to service gay weddings.

The letter followed a wave of criticism from other major tech companies, including Sales Force, which canceled a major event in the state. Though Cook wasn't the first to speak up on the issue, his letter did draw broad attention to the legislation, fueling a movement against these bills.

The public pressure resulted in Indiana reforming the law so that people could not use their religious beliefs to discriminate against anyone based on their age, sex, gender identity, sexual orientation, race, color, military service, ancestry, religion, disability and national origin. Arkansas also took similar measures to amend a comparable bill before it was voted into law. While some argued that these changes did not do enough to protect potential discrimination based on religious beliefs, it shouldn't go unnoticed that Cook's letter sparked was apart of the charge that lead to actual legislative change.

A departure from Jobs: Others have said it before, but Tim Cook is a decidedly different CEO from Steve Jobs, who died in 2011.

For a long time, Cook was just one of the cogs in Apple's great machine. He joined Apple in 1998 as senior vice president of worldwide operations and rose to chief operating officer before Jobs' death. Now CEO, Cook is in an enormously influential position to speak and be heard. "It's a bully pulpit for speaking out on issues he feels passionately about," Cusumano told Mic. "Jobs never used the company as a bully pulpit."

Jobs preferred to make public show of Apple products, not political matters. Apple has stated that Washington wasn't a priority for Jobs and precious little was spent on lobbying efforts, according to a Bloomberg article detailing Cook's first dance with Congress over taxation issues.

Even Jobs' use of a political science-fiction novel in its famed "1984" Super Bowl campaign was strategically corporate. The ad references George Orwell's dystopian novel 1984 and paints "Big Blue," for IBM, as "Big Brother" and IBM customers as grey mindless drones following a televised leader, while portraying Apple as a beacon of creativity, color and free thought.

While Jobs was eager to go after corporate competitors, Cook has been far more focused on tackling legislation during his tenure as CEO. He's spoken out on corporate taxation, gay rights, religious rights and digital privacy. Some of these topics are hardly germane to Apple's business.

Rather, Cook has developed a reputation for speaking out on issues that are important to him personally. For instance: gay rights. In October 2014, Tim Cook announced that he was gay in an opinion piece. This was perhaps Cook's coming-out ceremony in more ways than one. It kicked off a much more public persona — and a streak of activism — for the previously quiet CEO.

The opening to that hallmark letter has now become more relevant than ever. "Throughout my professional life, I've tried to maintain a basic level of privacy," Cook wrote. Now that privacy that he enjoyed for much of his adult life, as he sees it, could be in jeopardy.

It's also a strategic business move. Of course, given Cook's influence, there's a question over whether his public pleas are all part of an elaborate press stunt to give Apple customers the impression that the company is on their side. That could very well be — but it would be shortsighted to write off Cook's statements as nothing but PR.

As Edward Snowden's revelations about bulk government data collection demonstrated, the government is prone to overstepping its bounds when given a little leeway. Instances of the government overextending its reach are ubiquitous: One example is Stingray, a tool for tracking cellphone communications once reserved for the battlefield, which has been used in secret by police departments without a warrant.

In conceding to the court order and creating a tool for the government that allows it to break into an iPhone with brute-force attacks, the company would be setting precedent for this same tool to be used again. The point Tim Cook keeps underscoring is this: If the technology exists, it will be used again and potentially, down the road, misused. Not just by the U.S. government, but by other governments where Apple vends its products.

Also, people forget that strong encryption and other security protocols are technology that Apple has invested in building. The government is now asking Apple to invest its own money in building technology to break an innovation it spent time and money creating. One could argue that this discourages mobile phone and computer makers from making strong security in the future. As the head of Apple, Cook likely has some insight into how this court case may affect the future of cybersecurity.

Ultimately, the fight over encryption and user-data privacy is one that reaches far beyond Apple. Cook's opposition comes on the heels of the passage of the Cybersecurity Information Sharing Act, which provides a direct channel for companies and government to share information about breaches while potentially offering a loophole for obtaining data without a warrant. Meanwhile, Microsoft too is currently in its own battle over whether law enforcement should be able to pluck information from data centers located on foreign soil.

Regardless of who comes out on top, there's no doubt that Cook has significant sway over the issue. Though Cook has not convinced the courts that Apple is justified in refusing the order, many journalists and consumers appear persuaded. Cook's open letter and continued public debate over the FBI order has stoked support for the iPhone maker. Will that favor go far enough to stave off the courts? We'll have to wait and see.