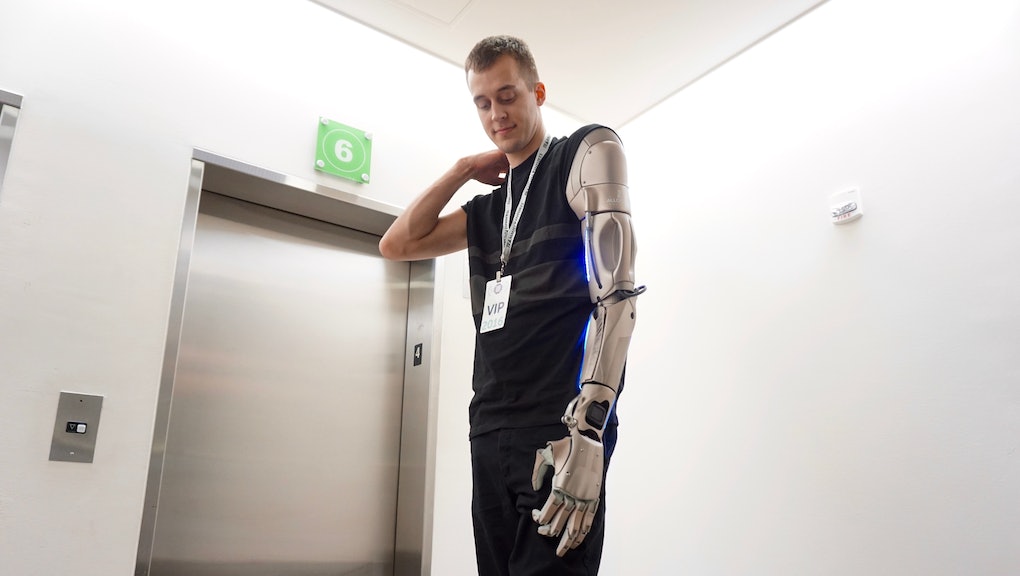 How 'Metal Gear Solid' Inspired the Coolest Prosthetic Ever

James Young, a 25-year-old biological scientist who lost his left arm and left leg in 2012 after falling under a train in London, just debuted a world first. On Saturday night at BodyHacking Con, a conference in Austin aimed at people interested in DIY alterations to the human body, Young showed off a futuristic prosthetic arm modeled after the one worn by Metal Gear Solid protagonist Venom Snake.

Young found out about the opportunity to receive the arm from an ad he saw at his regular prosthetist, which called for amputees who were also avid video game players. Thinking he likely wouldn't have much competition, Young applied. And while the limb was on the fritz at the presentation — "We just got it back from the electrical engineer and there are parts just glued in for now," Young told Mic — it could be a game-changer.

The new limb, which attaches at the shoulder with a series of straps across the back, looks like the absolute definition of a Hollywood cyborg arm. Yeah, it's aesthetically pleasing, with bright blue LED lights and a sleek carbon fiber body. But the bells and whistles are where it gets really cool. Young told Mic the arm will be able to connect to Wi-Fi, and it has a USB port near the hand so if he's holding his phone it can charge at the same time. There's also a flashlight, a smartwatch built into the wrist and a flying quadcopter drone that attaches at the shoulder and streams images to a pair of goggles while it flies. When it's fully functional, that is.

Leveling up: There's going to be a learning curve, and while the prosthetic limb might make gaming a little easier in the future, Young has already spent three years adapting to using one hand. "This won't necessarily impact my gaming," he told Mic. "I use a normal controller, then put the thumb stick on my lips or my chin and push it around. If I need to use a trigger I just reach over with my teeth and give it a little gnaw. I've become adept at doing that and it would be hard to learn something else."

Young said Special Effect, a charity that offers technology for amputee gamers, "will send you special parts for gaming, but I like being able to go over to my friends' and not need to bring special cables and switches."

Right now, the prosthetic is just sort of slung up with straps. Young started a fundraising page to get what's called direct skeletal fixation, or a titanium implant fitted directly into his bone. So instead of starting his day by putting on what looks like a bondage outfit, his prosthetic hooks right up to his new titanium bone.

The arm probably won't be Young's everyday prosthetic, since, at £60,000 (about $85,000), there's a lot more concern over getting it broken or dirty than there would be with the simple hook-hand setup. The debut of Young's new prosthesis shines a light on the rise of high-tech prosthetics for amputees who aren't interested in submitting to fleshy, two-armed standards. Young's arm intentionally looks like something out of a video game because that matches his personality. And that brings up what might be the next wave of body modification, or at least the one most heavily discussed: If people can trade in their organic limbs for something with a quadcopter and a USB port, will they?