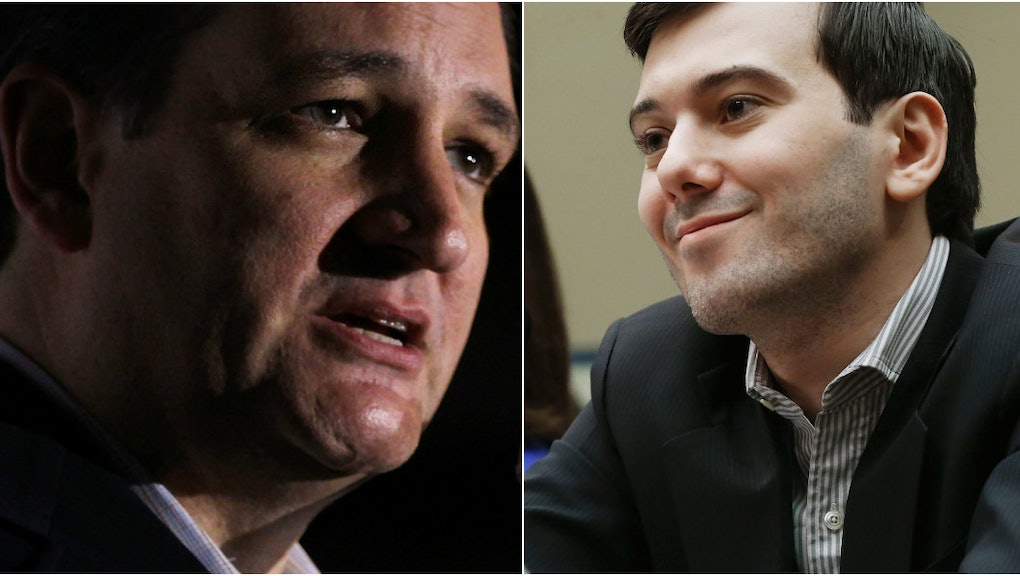 For the past nine months, one topic has been at the forefront of our national conversation about the 2016 election: Ted Cruz's face.

"Hating a face like that, the O.G. face made for punching, is actually super easy," Wonkette said of Cruz's mug.

"It's hard to look at Ted Cruz's face. He's said to be a brilliant orator with a sharp legal mind. But his expression unsettles me," neurologist Richard E. Cytowic wrote for Psychology Today.

"I don't know why, but something about Ted Cruz's face just makes me want to punch him," Samantha Cart wrote on Twitter.

There seems to be a collective, visceral reaction to Cruz's visage. And the Texas senator is not alone; among the recent ranks of "punchable faces" highlighted by the media are pundit Bill Kristol, former pharmaceutical CEO Martin Shkreli, Minnesota dentist and lion-killer Walter Palmer and Utah congressman Jason Chaffetz. All of these men have been publicly derided for having facial expressions that just plain rub people the wrong way.

This overwhelmingly negative response to Cruz's face is unique for how seemingly widespread it is. As Jessica Goldstein of Think Progress previously noted about Shkreli, "plenty of hated individuals find their appearances ridiculed by the masses, but it's rare to see such a specific yet universal reaction." Is the collective reaction to Cruz's countenance a matter of genetics? Or is there an underlying explanation as to why virtually thousands of people have determined that Cruz's face as, well, punchable?

The rise of "punchable faces":  "Punchable faces" aren't necessarily a new concept. The German term Backpfeifengesicht roughly translates to "a face that cries out for a fist in it," and its origins might date back to the 19th century.

But according to a Google Trends search, Feb. 2016 marks the highest "punchable face" search count Google has ever seen, in large part due to the upcoming presidential election. Everyone from bloggers to reputable magazines to the Twitter hivemind have caught on to the trend of declaring divisive or notorious public figures in need of a good wallop.

According to Barrett, there's a psychological reason why we so frequently use the phrase "punchable face" to describe Cruz: because it's more efficient for our brains to chalk our distaste for him up to his appearance, rather than saying, "I'm angry because Ted Cruz champions political beliefs I don't."

"Usually we consider an experience of emotion to be relative, whereas we consider a perception to be objective, so any behavior based on a perception seems more valid than one based on our experiences," Barrett told Mic. "Also, it shifts the responsibility from the actor — 'I was angry so I punched him' — to the target of perception — 'his face was punchable so I punched him.'" Saying Cruz has a punchable face doesn't make us violent — it makes him responsible for us wanting to punch him in the first place.

When a face works against you: Oddly enough, the faces that we find most punchable aren't the types of faces that are able to withstand taking a punch. A 2014 study published in Biological Review found that facial features like wide cheekbones, strong jaws and thick orbital bones around the eyes developed so our ancestors, australopiths, could sustain a hit to the face. Yet the people most commonly said to have "punchable faces" of today's media circuit seem to often have weaker facial features.

Take, for example, Shkreli, the former CEO of Turing Pharmaceuticals, who hiked up the price of the antiparasitic drug Daraprim — a drug commonly used to treat HIV patients — from $13.50 to $750 overnight, in late 2015. The pariah of the medical world and the bane of social media, Shkreli has been deemed "the most hated man in America" by the Huffington Post, while New York magazine recently created a compilation of his "10 most punchable faces."

Many of Shkreli's facial features, such as his large, round eyes, the short distance between his brow and mouth, and his high eyebrows and a round face, are markers of what social psychologists call "babyface." Psychologists Leslie Zebrowitz and Susan McDonald, analyzed public perceptions of "babyfacedness" in a 1991 study that found that people with babyfaces (i.e. round and delicate features), are likely to be treated as warm and naive, and are also more likely to win cases in small claims court, because people view them as innocent.

But how does that explain the apparently nationwide consensus that Shkreli is among the most punchable men in America? Well, according to Hehman, who studies facial cues and social evaluations, babyfaces are perceived as innocent "except when it is clear the person did the crime on purpose, as in the case of Shkreli. ... Then people have a really strong reaction, seeing this innocent-looking person doing something so incongruous with their appearance."

"I don't know many people who want to punch a baby," Barrett told Mic. "That being said, we might speculate that it leads people to perceive [people with babyfaces] as more immature, which might be a factor in seeing them as punchable."

"I don't know many people who want to punch a baby."

Sending the wrong facial cues: There is no one kind of face that elicits a universally negative reaction. But research shows that we form initial impressions of people, in part, based on our perception of their faces.

In order to find out how perceptions change across different traits, Todorov used behavioral studies and computer modeling to chart how face traits can predict social outcomes. The findings? Overall, wider faces are seen as more competent and dominant, while Hehman and Jonathan Freeman's 2015 research found that trustworthiness and friendliness are perceived from happier expressions. (Play around with Todorov's facial models to get a sense of how we map certain characteristics.)

"Generally, there are two independent dimensions on which we process other faces," Hehman explained to Mic. "One dimension is, 'Does this person have positive or negative intentions toward me?' Things like trustworthiness, friendliness, warmth, come from this dimension. The other dimension is, 'Does this person have the ability to enact their intentions?' Things like competence, strength, dominance, come from this one."

So, is there a type of face we would then read as "punchable?"

"My guess would be 'punchable faces' are ones that are low on both these dimensions, so not particularly strong- or competent-seeming, and not looking very trustworthy," Hehman said.

According to Hehman, from a morphological standpoint, Shkreli's mocking and baby-like face would be perceived as both untrustworthy and incompetent. Similarly, Cruz's facial features, such as his close-set eyes and soft chin, read as less dominant to us, so we may initially process his face as weaker.

As Cytowic pointed out, Cruz also exhibits a tell-tale off-putting fake smile: the presence of a voluntary upturned mouth, but no involuntary muscle movement around his eyes. Since we view Cruz as a candidate in a presidential election, his weaker face and seemingly fake smile seem incongruous with the position he is seeking. Thus, we might decide he is in need of a knuckle sandwich.

Apparently, there's an evolutionary reason why we read cues like "untrustworthy" or "incompetent" in faces.

"In our evolutionary history, it was important to avoid threats," Hehman explained. "Physically strong people could be a threat, and people with angry emotional expressions toward us were likely to be threats. Researchers currently think this is why humans are very sensitive to detecting these sorts of signals from the face."

Context is key: "Punchable faces" do tend to have something in common: They're aggravatingly, annoyingly, ball-up-your-fist smug.

"We don't really 'see' smugness. It looks the same as a smile," Hehman said. "What makes it 'smug' is seeing a smile in a situation in which the person did something wrong and is supposedly being punished for it. Smiling in this context doesn't make the person seem repentant. My guess is that it is the mix of perceiving the emotional expression and the context in which it is viewed."

It might be a matter of people's perceptions playing a huge role in how they see the world. "People construct their own experiences and perceptions," Barrett told Mic. "During development, the brain wires itself to its surroundings, so that it contains the concepts, theories and expectations from our culture. This type of plasticity continues in some form or another throughout life."

"So if many people have been angry at Cruz or Shkreli in the past, or if they have learned that certain types of behavior are unacceptable, then this will influence how they experience affect," Barrett continued. "People experience affective realism — their own affective state influences the predictions they make, and therefore what they literally see."

Barrett's research has shown that affective realism and moods can influence how we react to things. We may interpret a neutral face as an angry face, or we might see an everyday object as a weapon. In other words, our feelings can actually change what we see.

More than a smarmy face: Todorov agreed that it's not a matter of a punchable face — it's us. "I think it has to do much more with our knowledge about the person than with facial features, per se," Todorov told Mic.

"We are extremely good at remembering evaluative, emotion-laden facts about people, and their faces always trigger this knowledge. A person like Shkreli generates tons of negative feelings, and these are easily translatable into hypothetical (punching) actions."

So, the next time you hear someone say "That guy's face is sooo punchable," remember that it probably doesn't have anything to do with his face actually being a magnet for fists – it probably has to do with the guy himself.