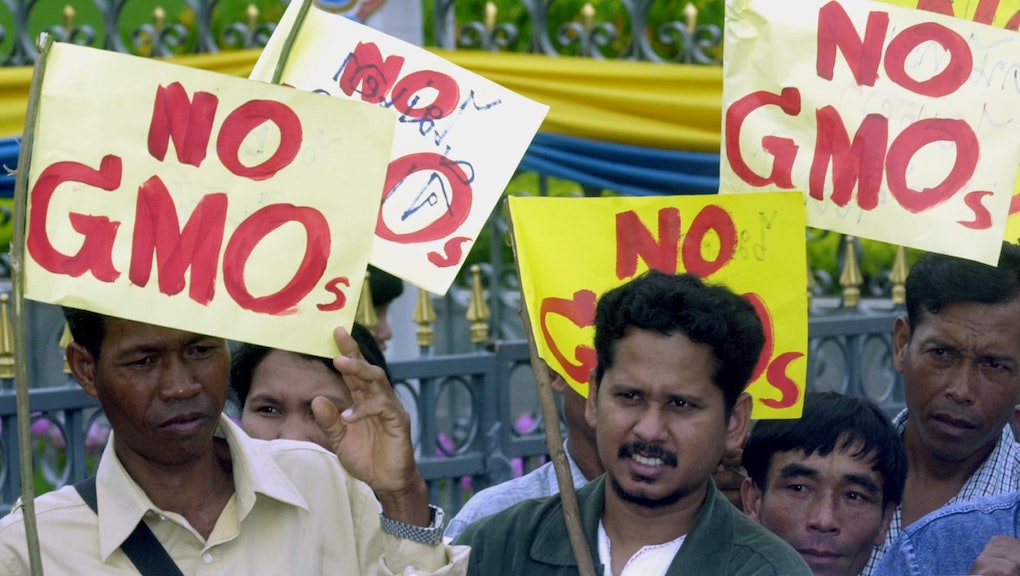 What Are GMOs? Here’s What You Need to Know About Genetically Modified Organisms

On Thursday, a Senate committee will vote on a bill that would allow states to forego adding labels to genetically modified foods, according to the Associated Press. The bill was drafted by Senate Agriculture Chairman Pat Roberts of Kansas, in order to block a Vermont law that will require labeling genetically modified foods. The legislation will create "voluntary labels" for companies who can opt out of using them or not.

"Congress must pass a national food labeling solution that offers farmers, families and food producers the certainty and access to the affordable and sustainable food supply they deserve," Pamela Bailey, head of the Grocery Manufacturers Association, told the AP. But Scott Faber, chairman of the Just Label It campaign has said that Roberts "is proposing to deny American consumers the right to know what is in their food."

But what are GMOs exactly?

Read more: What Are the Health Benefits of Turmeric? Here's What Science Says About the Spice

According to the World Health Organization, genetically modified organisms, often abbreviated as GMOs, are plants, animals or microorganisms that have had their genetic material changed in order to take on characteristics that don't naturally occur. The technology used to create GMOs has the ability to select "individual genes to be transferred from one organism into another, also between nonrelated species." In other words, think of GMOs as "mutant" food.

An estimated 75% or more of all processed foods, from soup to crackers, may contain genetically modified ingredients, according to the Center for Food Safety.

"The problem with concluding that GMOs are safe is that the argument for their safety rests solely on animal studies,"  Carole Bartolotto, registered dietitian wrote in a blog post for the Huffington Post in 2014. "These studies are offered as evidence that the debate over GMOs is over. Nothing could be farther from the truth."

"Ultimately, we need GMO labeling so we can do the epidemiological studies that are essential to determine their risk. Without long-term data -- in humans -- no one can make the claim that GMOs are proven safe," Bartolotto concluded.

But Joe Regenstein, a professor in the Department of Food Science at Cornell University, believes the GMOs are necessary for the future.