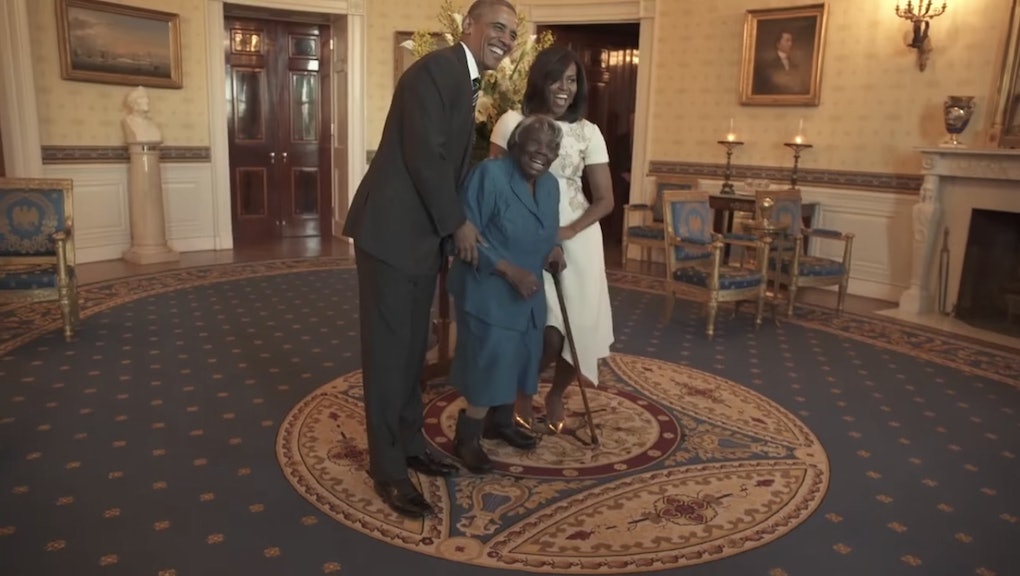 Virginia McLaurin is living and breathing evidence you're never too old to dream big.

During a recent Black History Month event at the White House, the 106-year-old realized her long-held dream of meeting America's first black president. Upon being introduced to President Barack Obama and first lady Michelle Obama, McLaurin spontaneously erupted into dance. Now a video of the meeting, posted late Sunday night on the official White House Facebook page, is going viral — 18 million views in nine hours — because well, why wouldn't it?

McLaurin was born in 1909 into a segregated South Carolina, meaning that for most of her life the notion of having a black president — and getting to meet him — was likely beyond her wildest dreams.

In the video, McLaurin is visibly overcome with glee upon meeting Obama, who then asked if she'd like to meet the first lady. As she rushes over to her, the president laughs and says, "Slow down now!"

The first lady leans down to hug her. "I want to be like you when I grow up," the first lady said, at which point McLaurin busts out dancing. Infected by her enthusiasm, the Obamas join in.

In 2014, McLaurin filed a petition to the White House, requesting to meet the Obamas, the Telegraph reports.

She then followed up with a YouTube video request on Dec. 18, 2014. "I didn't think I'd never live to see a colored president," McLaurin says in her video. "I'm so happy; I pray for you everyday."

Watch the joyful moment here. If this doesn't make your week, nothing will.