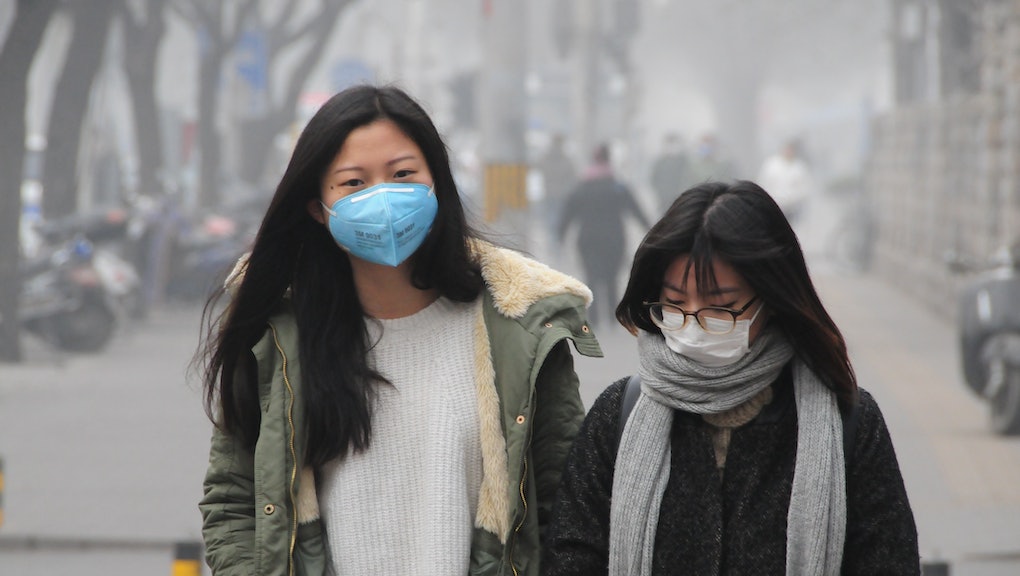 Polluted Air Could Be Making Us Obese

Here's yet another reason to load up on high-end respiratory masks and bottles of clean air.

Chronic exposure to polluted air may increase our risk of obesity, according to a recent study conducted by Duke University researchers, and funded by agencies of the Chinese government. The findings have only been proven so far in rats — but if shown to apply to humans too they can hopefully fuel efforts to combat the planet's pressing air pollution problem.

To run their study, researchers divided pregnant rats into two different chambers to live: one filled with Beijing's highly polluted air, the other filled with clean air, according to Canada's CTV News.

After 19 days, the rats breathing Beijing smog were far worse off, health-wise. They had 97% higher levels of total cholesterol — not to mention increased lung and liver inflammation and triglyceride levels, according to CTV. They also reportedly showed higher levels of insulin resistance, which can lead to Type 2 diabetes.

They were also fatter. Though both groups of rats followed the same diets, those breathing unfiltered air were "significantly heavier at the end of pregnancy" than their clean air-breathing counterparts, according to the study. The rats' offspring, who were kept in the chambers with their mothers, were affected as well; at 8 weeks old, those breathing unfiltered air were also found to be "significantly heavier" than the other group.

The impact on the rats' health was worse at eight weeks than at three weeks, suggesting long-term exposure to polluted air could lead to the inflammation and metabolic dysfunction that trigger weight gain, CTV reported.

"Since chronic inflammation is recognized as a factor contributing to obesity and since metabolic diseases such as diabetes and obesity are closely related, our findings provide clear evidence that chronic exposure to air pollution increases the risk for developing obesity," senior author Jim Zhang said, according to CTV.

"If translated and verified in humans. These findings will support the urgent need to reduce air pollution, given the growing burden of obesity in today's highly polluted world."

The need to reduce air pollution is urgent, indeed. After all, we've spewed so much crap into Earth's atmosphere, it's now literally visible from space.