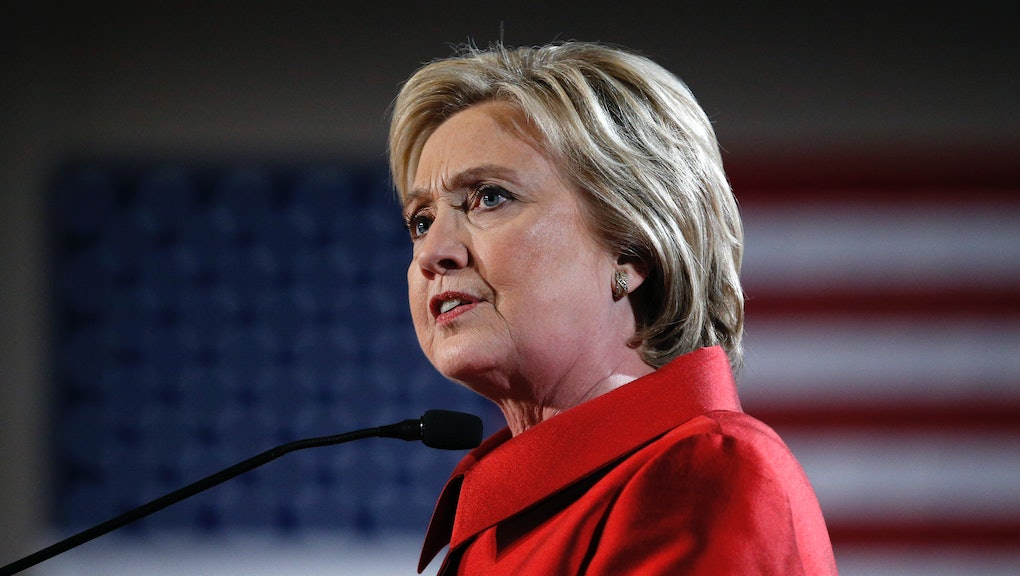 The former secretary of state actually delivered the jab on Thursday, as polls showed her locked in a tight contest with Sanders in the Silver State. But the remarks didn't receive widespread attention until late this weekend, after Clinton defeated Sanders by more than 5 percentage points.

Speaking at a campaign rally, Clinton said, "I'm not just making speeches and not just promising free this and free that and free everything." The line was widely interpreted as a dig at Sanders' proposals for tuition-free public college and a single-payer, Medicare-for-All health system.

A familiar refrain? For many listeners, Clinton's remarks evoked memories of Mitt Romney and Jeb Bush, both patrician Republicans who came under fire for comments suggesting that Democrats sought to curry favor with voters by offering free benefits.

After his criticism of President Barack Obama's health care law elicited boos during a 2012 address before the NAACP, Romney shrugged off the incident by saying, "Your friends who like Obamacare, you remind them of this, if they want more stuff from government, tell them to go vote for the other guy — more free stuff. But don't forget nothing is really free."

Following his loss to Obama that November, Romney chalked up the result to Obama's "gifts" to key demographic groups, "especially the African-American community, the Hispanic community and young people."

"With regards to the young people, for instance, a forgiveness of college loan interest was a big gift," Romney told donors in a conference call. "Free contraceptives were very big with young, college-aged women. And then, finally, Obamacare also made a difference for them, because as you know, anybody now 26 years of age and younger was now going to be part of their parents' plan, and that was a big gift to young people."

For a party seeking to combat perceptions that it was callous toward minorities and the poor, Romney's comments proved decidedly unhelpful. But three years later — despite running for president on a platform of inclusive conservatism — Bush set off a firestorm with similar remarks. Stumping in South Carolina in September, the former Florida governor argued that Republicans should appeal for black voters by countering the Democrats' message of "free stuff."

"Our message is one of hope and aspiration," Bush said. "It isn't one of division and 'Get in line and we'll take care of you with free stuff.'"

Among the most vehement critics of Bush's statement? Hillary Clinton.

"Republicans have no problem promising tax breaks and sweetheart deals to their corporate friends, but when Democrats fight to make sure all Americans have access to quality, affordable health care, early childhood education and job training, that's giving away 'free stuff'?!," she wrote in a Facebook discussion. "Talk about backwards."

Now the tables are turned: Clinton critics juxtapose that statement with her recent attack on Sanders and see blatant hypocrisy:

Others, meanwhile, seized on Clinton's remarks as further evidence that she's hardly a bona fide progressive, for all her efforts to accommodate herself to a Democratic electorate outraged at Wall Street and income inequality:

Asked for comment on Clinton's remarks, Symone Sanders, Sanders' national press secretary, told Mic that the senator has laid out funding mechanisms for his programs.

"The plans he has put forth on health care and college, he has told the American people how he would pay for them," Sanders said.

Specifically, Sanders has called for a tax on Wall Street transactions to fund his plan for free public college, while his Medicare-for-All system relies on a mixture of estate, income and payroll taxes, as well as a 2.2% premium.

But is Clinton becoming Romney 2.0? Symone Sanders wouldn't comment on that score — but it's a question on the lips of many observers in light of Clinton's attack.

For all the obvious similarities between Clinton's rhetoric and that espoused by Romney and Bush, though, there are important substantive differences.

Both men favored repeal of the administration's health care reform law and advocated drastic cutbacks to the social safety net. Bush, for instance, proposed eliminating food stamps, federal housing assistance, and Temporary Assistance for Needy Families — which itself was a dramatically gutted version of an earlier cash welfare program, Aid to Families with Dependent Children. Like Bush, Romney also supported gutting federal programs like food stamps and housing vouchers, preferring to leave them to states.

By contrast, Clinton pledges to safeguard and build upon the Affordable Care Act, vows not to impose Social Security benefit cuts and decries GOP-backed cuts to food stamps and unemployment insurance. She may not champion a Scandinavian-style social democracy, as Sanders does. But neither does her critique of his policies emerge from the vantage point shared by conservative Republicans like Romney and Bush.

Still, the language Clinton chose to employ — suggesting, as Rush Limbaugh recently did, the Sanders supports "free everything" — understandably irks progressives who envision a more ambitious, expansive role for the federal government. They look at President Bill Clinton's 1996 welfare reform law — which kicked millions off the federal assistance rolls, even as extreme poverty soared — and see a safety need in need of expansion. Hillary Clinton backed that law as first lady and touted it as a success during her 2008 White House bid.

Writing in New York magazine last week, Annie Lowrey made the case for Clinton and Sanders to lend their full-throated support to an overhaul of welfare reform, with a return to the more generous assistance that defined the pre-1996 welfare regime.

So long as Democrats appropriate conservative rhetoric on the role of government, achieving such public goods will be a tall order indeed.