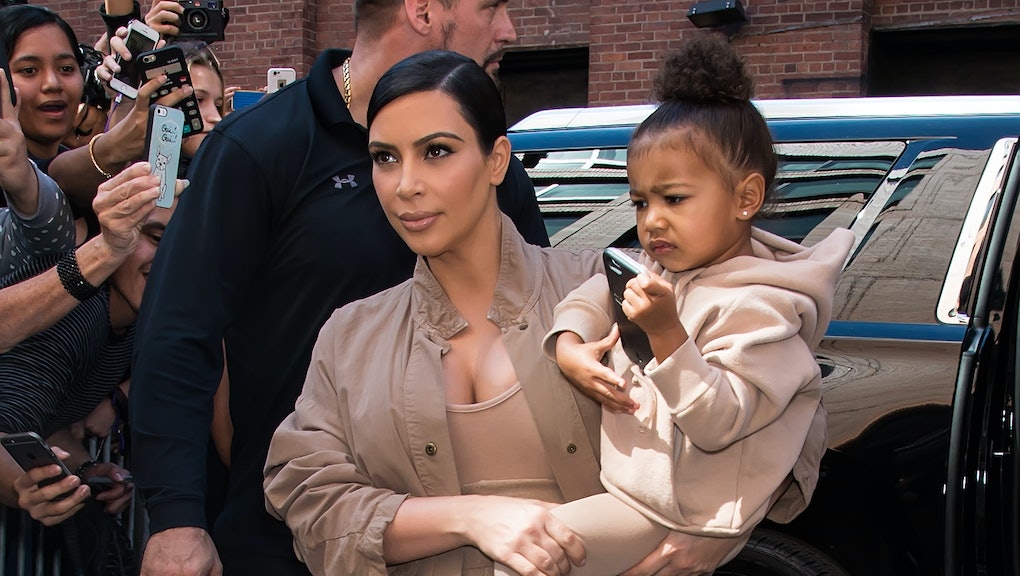 Women's blogs and magazines are obsessed with celebrities' post-baby bodies. Glossy covers celebrate the women who effortlessly "bounce back" to their pre-baby weight after delivering a living, breathing child into the world. Meanwhile, features turn the spotlight on celebrity moms who "took their time to lose the baby weight" — implying that completion of the weight loss is not optional.

We know the stories are bullshit. For real-world mothers, losing weight after giving birth isn't always a top priority — and it shouldn't have to be, what with having a new, wriggling, screaming infant to keep alive. But as it's National Eating Disorder Awareness Week, it's important to recognize the very real — and very damaging — effects the media's post-baby body fascination can have on women's body image and mental health.

It's important to recognize the very real — and very damaging — effects the media's post-baby body fascination can have on women's body image and mental health.

"I'm really concerned about it," Judith Brisman, eating disorder expert from Learn From Her and founding director of the Eating Disorder Resource Center, told Mic. She was recalling an unrealistic post-baby body story she'd seen the day before — something about a Hollywood icon achieving her pre-pregnancy size just four weeks after giving birth.

Pregnancy, and the associated weight gain, can be daunting enough for a person with a history of disordered eating — even without the added pressure of Blake Lively's "incredible bikini body after baby."

Those kinds of stories, according to Brisman, can "absolutely" make women scared to gain the necessary weight during pregnancy, which can sometimes trigger disordered eating. "I think there's a brewing terror about pregnancy weight these days that wasn't there 20 or 30 years ago," she said.

Gaining weight is a normal — and healthy — part of being pregnant. "If patients don't gain enough weight in pregnancy, they're essentially depriving their fetus of the ability to achieve a sort of normal birth weight," Dr. Isabel Blumberg, an OB-GYN at Mount Sinai Medical Center, told Mic.

New things happen to your body during pregnancy, in addition to the growth of a miniature human: your blood volume increases; you develop a placenta and amniotic fluid. Pregnant women are advised to take in 300 extra healthy calories per day to give their fetus the nutrients it needs.

"Your body has to support a lot of things changing in pregnancy," Blumberg said, "and weight gain goes along with that."

Depending on your weight before pregnancy, it's healthy to gain anywhere from 11 to 40 pounds over the course of your three trimesters, according to the Mayo Clinic. While weight gain is necessary for a healthy pregnancy, "for women with eating disorders, having to gain this amount can be very frightening," according to the National Eating Disorders Association.

But women with a history of eating disorders may not be able to rationalize that weight gain. Carolyn Costin is the founder and director of Monte Nido & Affiliates, a multistate network of eating disorder and exercise addiction treatment centers. She has dealt with a number of patients whose eating disorders have relapsed during pregnancy — food restriction, in particular.

"It's the whole idea of, 'Something's going to happen to my body and I'm not going to be in control of it,'" Costin said. "There have been a lot of people who I've seen who've relapsed because they've gotten pregnant. Even though there was a really good reason why they were gaining weight, it was too distressing — too difficult."

And then there are the cravings to contend with. In Brisman's experience, some pregnant women fall into dangerous restrictive eating habits because they don't understand why they're suddenly desperate to consume a massive roast beef sandwich or bowl of ice cream.

"If you're somebody that's worried about your weight, you're not going to be able to trust the hunger," Brisman said. "What we find is people start to try to restrict what they're eating because they're terrified of that amount of hunger. That can result in someone not getting the nutrition they need."

Even when patients allow themselves to gain pregnancy weight, they still may experience another form of disordered eating, Brisman said: binge eating.

"I see bingeing because someone feels so fat, they feel like they've blown it anyway," she said. Brisman urges her patients not to be scared of normal cravings. "If you just eat with the cravings, your body will gain the weight it needs."

For some, it gets even worse. The media can also fuel body image issues — and in turn, disordered eating habits — after delivery.

"It's very difficult not to look at whomever [celebrity] and say, 'Why didn't I pop back that quickly?'" Dr. Lucy A. Hutner, assistant professor in the Department of Psychiatry at NYU Langone Medical Center, told Mic. "Why didn't I lose 40 pounds in 10 weeks?

"There's this very strong idea in our culture of what the perfect body is, and so every single time we're pregnant and give birth, we're going up against that idea right away. That can be triggering for a lot of people."

"There's this very strong idea in our culture of what the perfect body is, and so every single time we're pregnant and give birth, we're going up against that idea right away."

What we can do: Costin reminds her patients that there's no use comparing themselves to new celebrity moms, whose jobs entail working 24/7 with trainers, chefs and nutritionists to lose the weight as quickly as possible. Here in the real world, where new moms balance child care, jobs and relationships, those same luxuries simply aren't available.

"It's like going into a fitness studio comparing yourself with a teacher, rather than all the other people in the class," Costin said.

When treating patients with postpartum eating disorders, Hutner urges them not to focus on magazine covers. "That's not our reality," she said.

"I try to really emphasize that our bodies have done an incredibly strong and powerful thing," Hutner said. "I try to really recast this whole idea, in terms of, 'Wow — look at what your body's been able to achieve. That's amazing.'"

But it isn't just up to doctors. The media should address the problem too. Major media publications haven't banned post-baby body stories in the same way Women's Health magazine stopped using the phrase "bikini body" on its covers. But the former editor-in-chief of Us Weekly — a tabloid well-known for its post-baby body features — at least got a taste of her own medicine when she infamously penned a New York Times op-ed about the pressure to lose her own post-baby weight.

Min acknowledged she's "partly to blame for [her] own physical netherworld," and even called for some sort of change. "The notion that instantly stick-thin figures after birth are normal is untrue," she wrote. "Sometimes, in my sleep-deprived nights, I ponder our ideal of this near-emaciated, sexy and well-dressed Frankenmom we've created and wonder how to undo her. Even just a little bit."

Googling "celebrity post-baby body" still continues to yield new results. So how should the media cover pregnant celebrities instead?

With "a bit of reality," according to Brisman.

"We need some more realistic pictures," she said. "I would want to have people who are willing to show what it's really like."