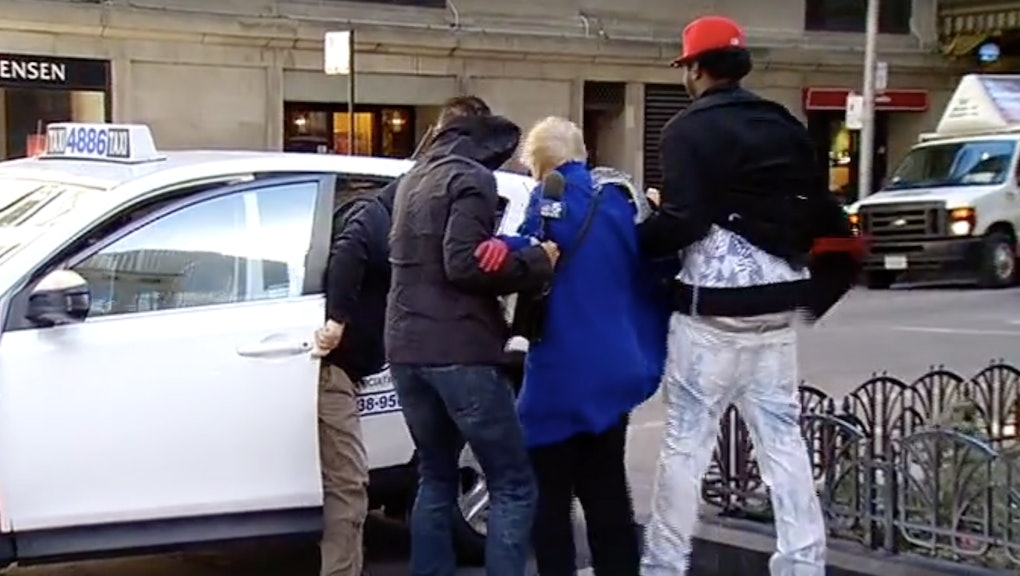 When one woman fell victim to the wrath of the Windy City on Friday, an NBC Chicago reporter and a passerby came to her rescue. It was a lovely moment captured by news cameras.

But not everyone who saw the incident on Facebook took note of the good deed.

Reporter Byron Miranda was on the scene reporting on Chicago's near record-breaking temperatures and the high wind warning when one woman inadvertently made the case for his report, clinging to a building wall to keep her balance in the 50 mph gusts.

Read more: A TV Exec Asked Female News Anchors to Go Hatless Outside Because They "Look A Lot Better"

Miranda grabs onto the woman and signals to a passerby who takes her other arm and the two escort her to a cab. It's the ultimate show of teamwork and Boy Scout-ian altruism, but of the 11 million Facebook users who watched the video and the nearly 20,000 who commented, many only came away with one thing: the helpful passerby's low-riding pants.

"No I didn't miss the point, it was nice they helped the lady out but it's a disgrace of the pants," wrote one commenter.

"Pull up your pants world. No one wants to see your shorts," wrote another.

And another: "I'm happy the brother stopped to help, but he could've pulled his pants up. Just sayin'."

Still others tried to remind commenters to keep perspective.

"Why do you concentrate on his saggy pants and not on the good deed he just did?" asked one commenter. "Obviously he has a better heart than you."

But anyone who's browsed internet comments before knows this much: No good deed goes unpunished.