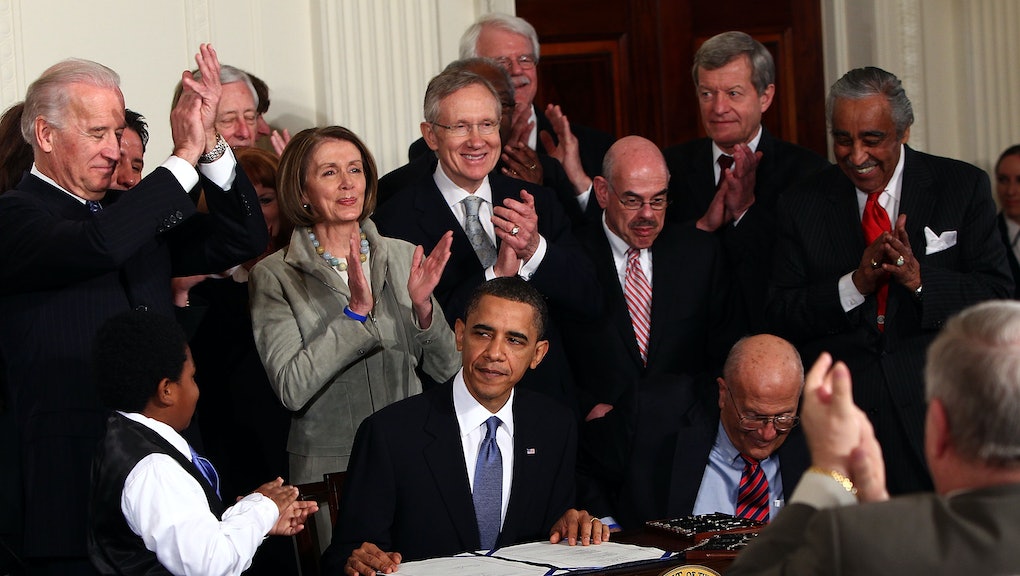 One Law Stands Between Us and a Dystopian Health Care Surveillance Nightmare: Obamacare.

No one should give me health insurance. I smoke, I bleed Krispy Kreme donuts and I sleep at all hours. There's a McDonald's in Queens, New York, that serves 50 McNuggets for $20 that I could navigate to while blindfolded. Fortunately for me, this behavior is my secret to keep from employers and health insurance agencies if I choose.

But in the age of Facebook and Google, is there any such thing as a secret?

Last week, the Wall Street Journal reported that employers like Wal-Mart were paying data analysts to "predict which workers might get sick." A new crop of data firms are analyzing piles of medical data and personal info, even paying data brokers to dig up people's buying habits in order to predict illness or calamity. (My Krispy Kreme receipts would be fair game.)

If this information truly reaches employers, it could allow for individual discrimination against those most likely to get sick or need time off. Worse, this unprecedented level of surveillance would be ripe for exploitation in the hands of insurance agencies looking for any opportunity to charge higher premiums.

Corporations colluding with Big Data to access your medical records or monitor your birth control? Surely, this can't be legal!

Here lies the crucial distinction: The firms in question are culling data and notifying individuals of possible health risks — but they'd never tell anyone's boss what they found out.

The firms in question are culling data and notifying individuals of possible health risks — but they'd never tell anyone's boss what they found out.

Mic spoke with Joe Rivas, a representative from Castlight, the firm at the center of the WSJ article. "There's never a point in time when we disclose any of this data — no personal record of employee health care is going back to the employer," he said. "It would be impossible to map data together that comes from us."

Of course it's impossible. Anything else would be totally illegal. Under the Health Insurance Portability and Accountability Act, or HIPAA, of 1998, employers cannot receive the private medical details of their employees without expressed consent.

OK, so what about the far bigger dystopian possibility of health insurers foreseeing our vulnerabilities and adjusting the price of insurance accordingly? Is there a law that prevents that? Sure there is. It's called the Affordable Care Act.

Obamacare changed a lot, explained Allison Hoffman, professor of health care policy at the University of California Los Angeles School of Law. "Insurers used to make money by sorting people into healthy and sick and charging more to the sick, or those that might become sick in the future," she told Mic. "Insurers are no longer allowed to do that."

Thanks, Obamacare: Insurance is based on the idea of shared risk. As long as no one knows which of us will become sick, we'll all buy into the system to protect the one who gets unlucky.

They're still out there: That doesn't mean there's nothing to fear from the encroachment of digital surveillance on your personal health.

Employee incentive programs are rolling out so that employers can wire you with health trackers to lower group premiums. Those same devices generate a wealth of data about you and your co-workers' activity — data that's already been used as evidence in court.

And what about all of the information collected by these firms to infer deep insights about your health? It could one day end up in the hands of hackers, or brokers who want to exploit that information for sales purposes.

But one thing we don't have to worry about is that your boss is getting push notifications when you don't refill your birth control. We have laws for that.