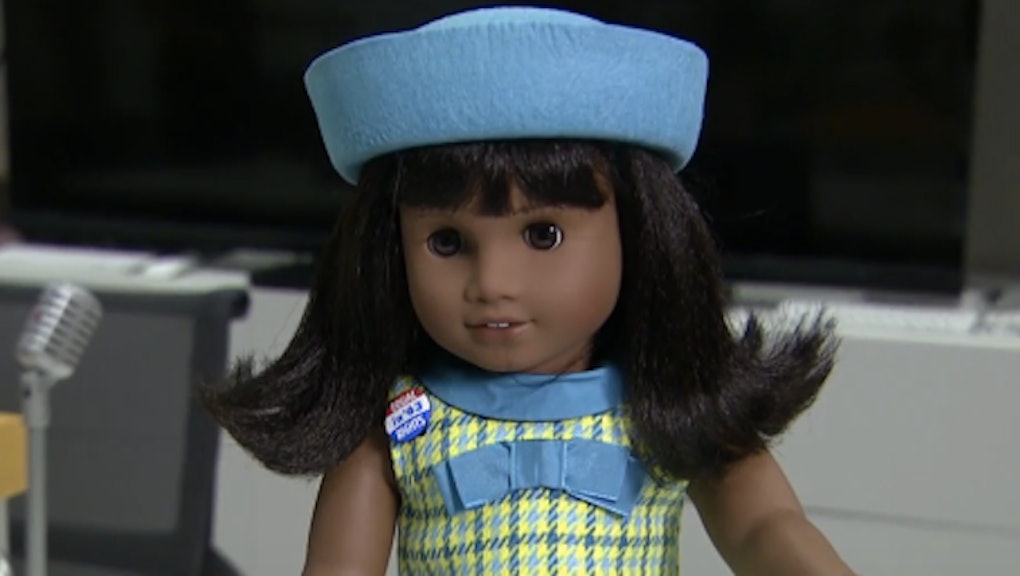 For 30 years, millions of parents have bought their children coveted American Girl dolls, likely due in no small part to their "educational" merit. Each doll represents an important era in US history — or at least its white history. But the company is disrupting their nondiverse legacy  by introducing Melody Ellison, who hails from the civil rights era.

Nine-year-old Melody, who hails from 1960s Detroit, "loves to sing and uses her voice to make a difference" and even has a "recording studio that plays music from Motown," according to CBS News. A panel of six historians and educators, including late civil rights activist Julian Bond, consulted the company in the doll's conception and creation. She will be available to purchase this summer for $115.

Melody is the company's third African-American doll, and her introduction comes in the wake of the company's controversial 2014 decision to discontinue four dolls, two of which were minorities, according to CBS News.

The company's first black doll — Addy, from the slavery era — was also a point of contention for the company. Some noted that the first black doll could have easily been presented in a more positive, inspiring context and, as one 2013 Change.org petition put it, "slavery was a vile, cruel, inhumane, unjust holocaust of black Americans," and the subject matter should not be "considered entertaining."

"She is a toy steeped in tragedy, and who is offered tragedy during play?" Brit Bennett queried of Addy in the Paris Review. "If a doll exists on the border between person and thing, what does it mean to own a doll that represents an enslaved child who once existed on that same border?"

"The universal feeling was that we needed to address the very difficult topic of slavery before we addressed any other experience in black history," Julia Prohaska, vice president of marketing for American Girl, explained of Addy's background to CBS News.

But despite this past criticism, it seems Melody's introduction may be American Girl's response to the recently amplified call for more diverse dolls across the industry — a demand other entrepreneurs and major companies alike have begun to meet. Twin sisters Laken and Carlissa King created the "Angelica Doll" in 2015, which has "facial features true to women of color" and "natural hair." In January, none other than Mattel introduced a variety of diverse Barbies. And studies confirm their importance: Dolls have been shown to impact the way children feel about things as meaningful as career aspirations.

"I think the doll industry has a very heavy responsibility in reflecting what is true about our society," Prohaska told CBS News.

While Melody certainly may not be able to embody the entire, complex history of the civil rights movement — nor adequately educate children about the movement's lasting legacy and impact today — she undeniably seems like a crucial and long-overdue way to start that important conversation.