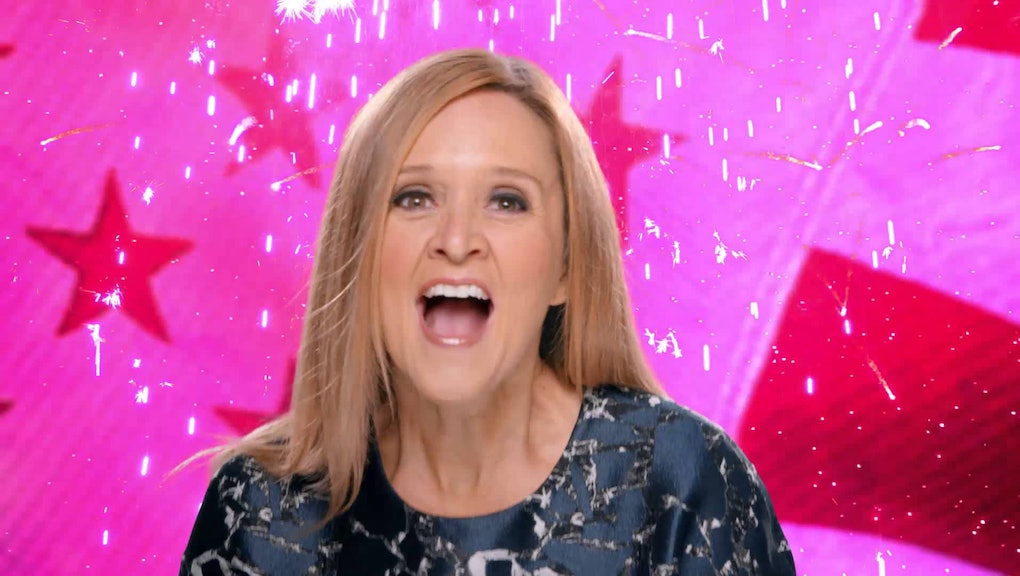 These are insults that sound like they belong more to YouTube comment threads than to late-night talk show segments. They uproariously reclaim the language of trolls that so pervades certain online spaces. Bee is using insult comedy as her own weapon to further advance her deeply feminist humor.

Name-calling in comedy, let alone late night comedy, is nothing new. John Oliver, Trevor Noah and Jon Stewart have all, for example, called out Trump in their own signature styles: an open "book that doesn't have very many interesting words in it" from Oliver, "an African dictator" from Noah and "Fuckface von Clownstick" from Stewart.

What makes Bee different is the sheer number of digs she has hurled at those she's mocking — and the gusto with which she's done so. There's a certain euphoria in Bee's delivery of "Hermione Clinton" and "sentient caps-lock button Donald Trump."

Like her forebears Joan Rivers, Kathy Griffin and even Tina Fey and Amy Poehler at their Golden Globes hosting gigs, Bee knows how to throw jagged-edged barbs that are funny precisely because they are rooted in pointed commentary. Bee is staking her territory on this side of celebrity comedy roasts, peppering her hilarious insults with a rueful smile that shows she's going for the kill.

Bee's gleeful brand of no-bullshit comedy was best displayed in a segment she did in her premiere episode on Kansas state Sen. Mitch Holmes, whom she chose as the inaugural "Elected Paperweight of the Month." Holmes, as Bee explains, was under fire for drafting a dress code aimed solely at female staffers. As the clip Bee showed notes, Holmes didn't include men in the guidelines "because they already know how to look professional."

It was an example of the types of segments we've come to expect from the veteran Daily Show correspondent. Here was a decidedly gender-biased attempt by an elected politician to yet again control female clothing choices in the name of propriety, and even worse, men's inability to control their own seemingly distracting desires, an issue that continue to be all too common across the country. Rather than (or on top of) explaining why Holmes' dress code was deeply sexist, Bee went even further. She made him the butt of her joke:

"You don't get to regulate what other people wear to work. I mean, I wouldn't try to regulate your finger-painted tie or your skeevy facial hair. And if I get distracted wondering whether that yellow stain around your mouth is whiskers or a lingering impression of a glory hole, that's my problem, not yours. You do you!"

This is insult comedy taken to the next level. Her takedowns don't seek to merely shock and draw attention to themselves (though they do), but they show a comedian unafraid to embrace the utter frustration of having to even deal with people like Holmes.

In another sense, the tone of Full Frontal highlights how low the level of discourse has gotten in our current political climate. When the Republican frontrunner is branding himself a blustering negotiator who gets things done, all the while demeaning his opponents, calling them "weak," "a clown," "a pussy" and "a world class liar," you're left with a political discourse that feels not unlike a schoolyard. Bee doesn't stoop to their level, but deploys that funny foul mouth of hers on them, as if to show them how it's done.

It's a weapon Bee is ready to own with relish. In one segment, she joked that Clinton's handlers had sent her into the University of Wisconsin-Milwaukee debate with a note on her wrist that read "Don't be c*nty." Bee was quick to point out that she'd received that very note from TBS. Thankfully for us, it's advice she has no interest in entertaining.