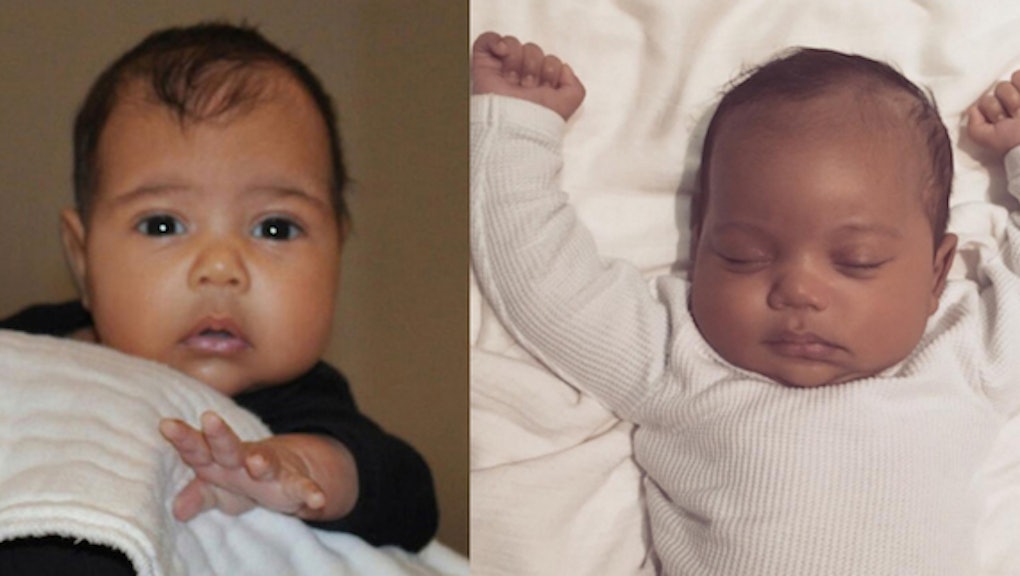 From Saint West to Blue Ivy, Here Are the Meanings Behind Celeb Baby Names

Welcome to the internet, Saint West. On Monday morning, social media queen Kim Kardashian West uploaded the first photo of her son, who has just as obscure a name as his sister, North. However, the Kardashian Wests aren't the only ones choosing peculiar names for their newborns.

Celebrities around the world pick some brow-raising names for their children, who seem to be famous before they're even born in the first place. Many guessed whether Kardashian West's second child would follow suit, with an appropriately named "South" or "East." However, despite what some might think, there seems to be some sort of thought process which goes behind picking unique names for their spawn.

Below are five of the most perplexing recent celebrity baby names and their meanings:

Kardashian West, who has spoken publicly about the complications she has faced in both of her pregnancies, sees the birth of her second child as a miracle, according to E!: The name Saint has clear biblical connotations, perfectly in line with the gospel-like theme for Kanye West's latest album, The Life Of Pablo.

Fans were shocked when superstar Beyoncé and rap mogul Jay Z announced the name of their first daughter, Blue Ivy. The name didn't seem to make any sense to many, and seemed as if the two were trying to create unnecessary attention for themselves.

A further look into the meaning of their daughter's name, however, reveals it's inspired by the couple's biggest accomplishments in life before her. "Blue" comes from Jay Z's album The Blueprint, the album which defined the hip-hop artist's career, while "Ivy" represents the roman numeral for four (IV), the title of Beyoncé's last album before giving birth to her daughter.

"Right, well, um, basically it was because when we were first pregnant, her daddy said, if it's, basically one day he just said, 'If it's a girl, I think her name should be Apple,'" Gwyneth Paltrow told Oprah about her daughter's simple yet strange name in 2004, according to Cracked. "And I just, it sounded so sweet, and it conjures such a lovely picture for me, you know apples are so sweet and they're wholesome, and it's biblical and it's just, they're so, and I just thought it sounded so lovely."

Perhaps not the most thought out reason, but at least there's something behind Apple's first name.

Does this one need much an explanation? Royal Reign's mommy, rap powerhouse Lil' Kim, will forever be considered one of the queens of rap, hip-hop and music in general. She defined her voice, style and attitude while paving the way for several artists like Nicki Minaj, reigning over the rap industry throughout her peak.

Apollo Bowie Flynn Rossdale may look like a run-on sentence at first, but musicians Gwen Stefani and Gavin Rossdale's third child's name has a lot of family history packed into it. When the two artist's first revealed their newborn's name in 2014, Rossdale informed Twitter Bowie and Flynn are both Stefani's and his mothers' maiden names.