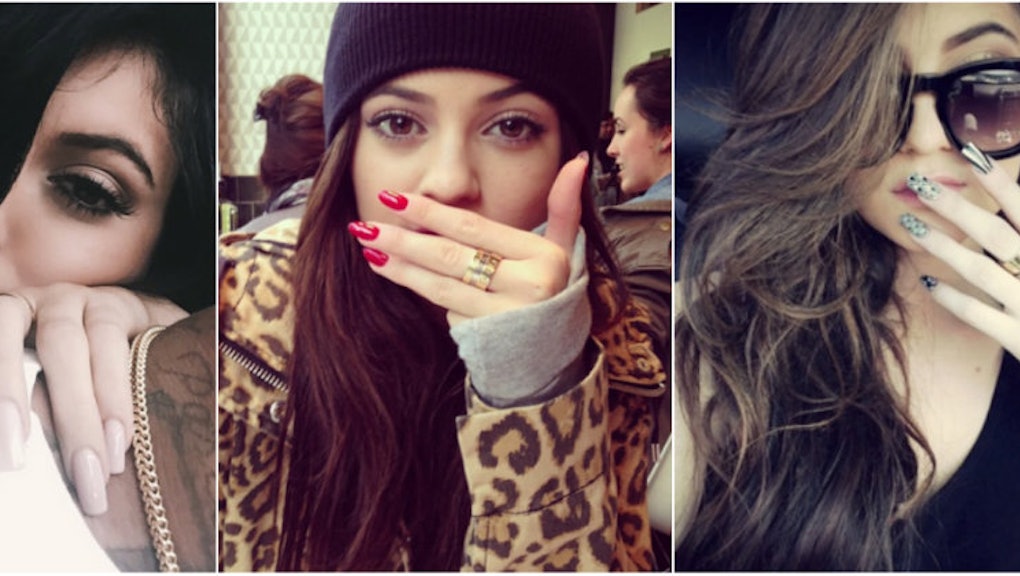 I blame Kylie Jenner. I've almost successfully hid from all that is Kardashian and Jenner, but damn, that girl's nails are all over Instagram and Snapchat. After seeing a photo of her hand outstretched like a starfish, showing off new purple stiletto nails, I knew I had to have them.

Jenner's nails weren't the only ones that drew me in. I also love Lady Gaga's nails as the Countess on American Horror Story: Hotel — her glamour was inhuman, her nails literally lethal. And it was Miranda July's New York Times profile on Rihanna that inspired one color in particular: "Her lips were bright red, her long nails were pale iridescent lavender, her mascara was both white and black in a way I didn't really understand."

Read more: These Instagram Beauty Trends May Not Be Great for Your Body

Yet after a year of their power, I ultimately had to throw mine into the dreaded acetone stew and get rid of them for the sake of my sex life, my bank account, but most importantly, my health. And it wasn't easy.

Causes for concern: Before I got them done, my initial hesitation surrounding the nails was focused on typing. As a writer, as with most professions in 2016, typing speed is a crucial asset. It took about a day to adjust, learning to type with the pads of my fingers. A few times when I failed to tell the nail technician, a lovely woman by the name of Sunny, to file them down, typing would become difficult with ridiculous talons. Add that to carpal tunnel and the stress of working from a desk, and by hour 12, I was done.

One of the other big issues was sex. Although I'm currently in a heterosexual monogamous relationship, I'm bisexual and have also slept with and dated women. And let me be blunt: There is no way I could be with a woman with these things. You really don't want them near any orifices. On top of that, it made it harder to touch and pleasure myself, which I hated, and if my boyfriend were to decide he wanted any #fingerinthebootyassbitch action, we'd have to proceed at his own risk.

Oh, and money. I was spending $40 (including tip) on my acrylic manicure with gel polish every two weeks. That's $80 a month, or $960 a year. Throw in $30 with tip for a pedicure once a month, and I was spending $1,320 a year on my nails. Doing my nails myself (except for on special occasions) only required watching some YouTube tutorials and spending $50 on a few polishes from Sephora. I estimated I'd save at least $1,000 a year.

But the biggest reason I melted off the acrylics in a chemical bath was about my health. The UV and LED lamps used in the application of the gel color over the acrylic raised concerns over skin cancer, a disease prevalent in my family. Research done in 2009  found two women who developed skin cancer on their hands had used UV lights for manicures.

A small study doesn't mean much, and the Food and Drug Administration hasn't issued any warnings on the lamps. But the acrylics themselves can also damage your nails; according to the American Academy of Dermatology, putting them on unhealthy base nails "might even cause you to lose natural nails." It was decided: I was going to give my nails a break, save some money and feel good about my health.

But taking them off was nasty. I opted to do it at home to save money (and if we're being honest, I was nervous to face Sunny and tell her the relationship was over). I found a YouTube tutorial, bought a bottle of acetone and removed them at home.

Ready for the horror pic?

It was gross. My apartment reeked of chemicals, and it took much longer to remove them than the video suggested. After 10 minutes of soaking, pulling my nails out of the acetone bath revealed chunky, soupy, science experiment hands. It took about half an hour of soaking before the fuckers had succumbed to the acetone.

A month after I killed the acrylics, little half moons of shiny new nail have grown, but 75% remains damaged and unsightly.

Despite that lack of glamour in my life, thought, I can now type easier. I save money. I'm able to change colors more often, and I feel better about what chemicals I'm exposing myself. Still, I'm glad I spent a year in acrylics, despite the unsightly damage they wreaked on my nails. I was feeling glamorous, so I inhabited that vibe.

But now I've come to terms with the fact that deep down, I'm more Earth Mother than Glamorous Gaga Vampire (or Kylie Insta Queen), and that's OK. Earth mothers can have sparkly magic nails too, without the trauma.