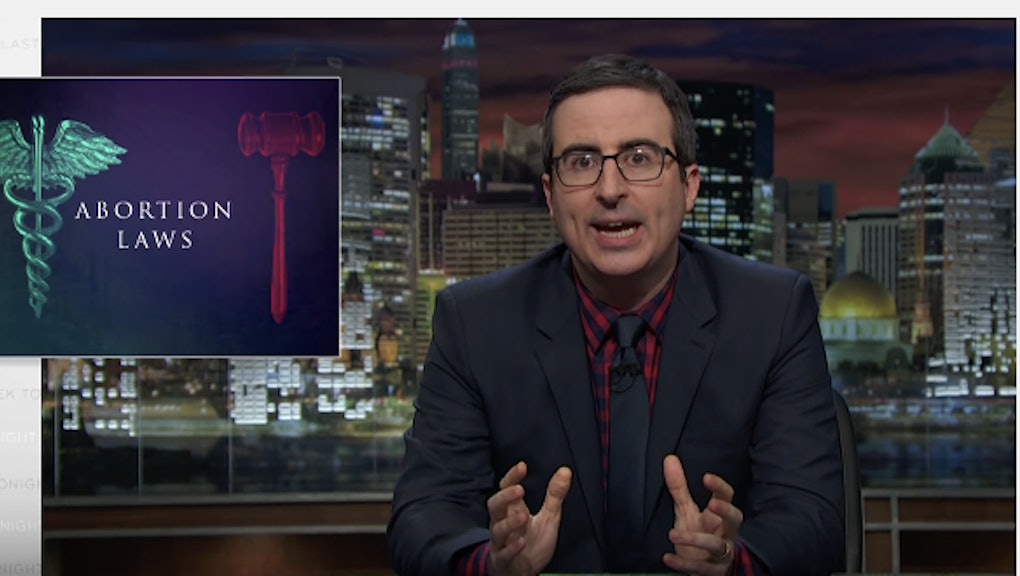 From transgender rights to sex education to gun violence and beyond, comedian John Oliver consistently uses his show, Last Week Tonight, to both eviscerate and explain some of the most pressing issues in the nation. Sunday night's episode was no exception: In light of the upcoming Supreme Court abortion case, Oliver took on the horrifying state of abortion access in the United States.

Although abortion is frequently regarded as a highly controversial issue in the U.S., the majority of Americans actually support access to it, Oliver notes. In fact, a March Vox poll on abortion policy showed that 62% of Americans believe "women should have access to safe and affordable abortion care," the comedian says.

"The truth is, people's opinions on abortion make up a spectrum," Oliver says. "But most of us believe it should be legal in at least a few circumstances," adding that only 19% of Americans told Gallup they thought the procedure should be completely illegal.

No matter where Americans fall on this spectrum, all should be concerned that since 2010 about 70 abortion clinics have closed in a dozen states, Oliver says, and states such as Missouri, South Dakota, North Dakota and Mississippi have only one clinic.

"Mississippi now has four times as many s's as it has abortion clinics," he says.

This occurred because the Supreme Court case Roe v. Wade has been replaced as the most important abortion case in this nation by Planned Parenthood v. Casey, which has essentially made state-level bans easier to pass, Oliver explains.

"Women can be asked to jump through a few hoops, just not too many," Oliver says, "which might sound a little less insulting if those weren't also the rules for a dog agility course."

Oliver then proceeds to break down some of these abortion laws — like the infamous Texas House Bill 2, also known as HB2, which requires clinics to meet unnecessary requirements like those regarding doctors' admittance privileges. In fact, Oliver points out, the American Medical Association has even stated there is "no medical basis" for requiring abortion providers to have local admitting privileges.

This "does make sense," Oliver says, considering that "hospitals will see anyone. They'll see you if you've gotten an Elmo pez dispenser stuck in your butt. They'll have questions for you, but they will see you."

What's more, legally induced abortions are perfectly safe; they have a mortality rate of 0.00073%, which is "nearly 10 times less than what one study found was the risk for dying as the result of a colonoscopy," and not even birthing centers in the state require doctors to have admitting privileges, Oliver notes.

"Texas will shut down an abortion clinic for having walls too close together, but if you want to give birth in a tub, surrounded by mood lighting, potpourri and the music of Bon Iver, no one will say anything other than, 'Just take it down a notch,'" Oliver says.

Oliver also touches on mandatory ultrasound laws and waiting periods, before concluding on a mic drop.

"Here is the thing," Oliver says. "Abortion cannot just be theoretically legal. It has to be literally accessible."