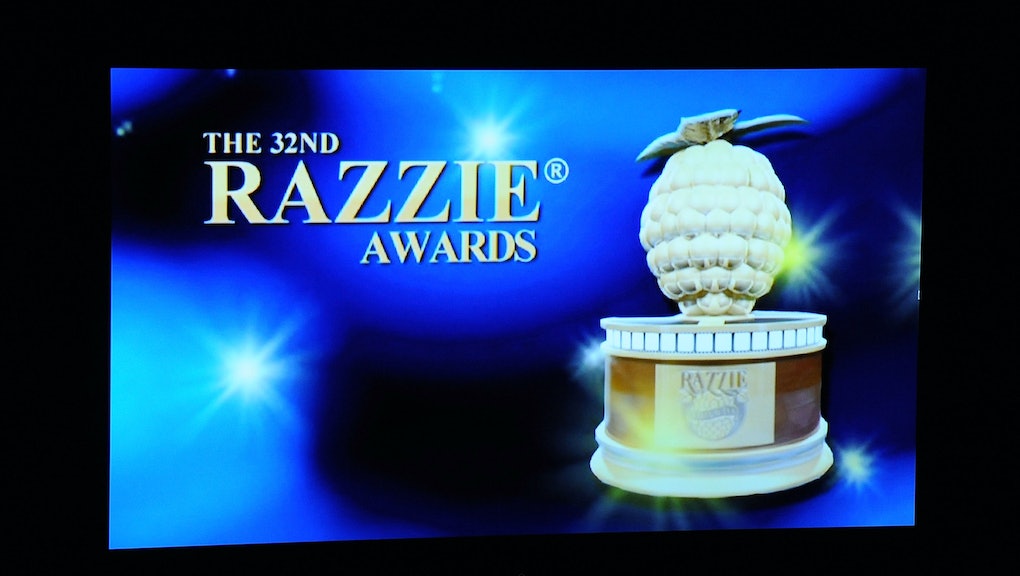 The Shameful Razzie Awards 2016: Predictions for Every Major Category of the Worst Movies

Each year, the Golden Raspberry Awards hilariously hand out spray-painted trophies (which cost just under five bucks) to the very worst of Hollywood. This year's dishonorable Razzie Awards kick off Saturday night, just before the 88th Academy Awards, otherwise known as #OscarsSoWhite, which air Sunday. Looks like tinsel town is preparing itself for a pretty shameful weekend.

Just like the Oscars, there are some films and actors that clearly have an advantage against other nominees in their categories. Fifty Shades of Grey will almost inevitably win a not-so-coveted award, as the drama-erotica is up for six Golden Raspberries, including worst actor, worst actress, worst director and worst picture. Ouch.

Below are the nominations for every major category in the 36th annual awards show, announced in January on YouTube and voted on by nearly 900 Razzie members, as Mic previously reported. We've placed our best bets on which actor or film will take home the prize in bold. Of course, being terrible is subjective, and it's really anyone's guess which nominees will be leaving the Razzies in smiles or tears.

Nobody needed a sequel to this regrettable disaster of a film.

The fact Six made audiences sit through a third Human Centipede should be enough for the director to be handed this Golden Raspberry.

2015 will forever be remembered by Sandler fans as his most disastrous year in film (yet).

I bet Kunis hasn't even seen Jupiter Ascending. It's probably on her laundry list of movies she wants to see if she ever has the time, but never gets around to it.

Pixels was already bad enough, and James certainly didn't bring much to the table.

- Kaley Cuoco, Alvin and the Chipmunks: The Road Chip [Voice Only] and The Wedding Ringer

Cuoco should have quit while she was ahead.

- Alvin and the Chipmunks: The Road Chip

If you managed to crack a smile at any point throughout the second Hot Tub Time Machine 2, it was likely because you saw a clock and noticed the movie was almost over.

Admittedly, all four "Fantastics" make just as good a choice, but Sandler's nomination and pairing with "any pair of shoes" is too hilarious not to win.

- Elizabeth Banks, for directing Pitch Perfect 2 after the Razzie-winning Movie 43

Here's hoping the Razzie champ makes an appearance at the 2016 Razzies.