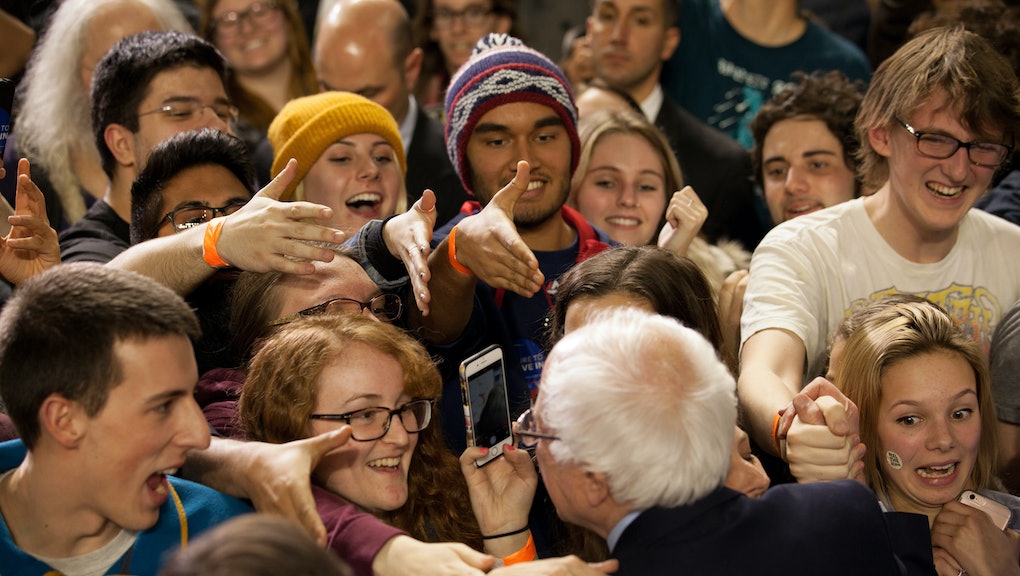 New Survey Reveals Why Millennials Are Flocking to Bernie Sanders

Following his defeat in Saturday's Nevada caucuses, Sen. Bernie Sanders faces an increasingly steep climb in his quest to defeat Hillary Clinton for the Democratic presidential nomination. Daunting as the delegate math may be, though, there's one group that won't be abandoning Sanders anytime soon: millennial voters.

In Iowa, New Hampshire and Nevada, the 74-year-old Vermont senator has crushed Clinton among voters between the ages of 18 and 29, nabbing more than 80% support. A new survey helps illuminate why.

The survey, conducted by Republican pollster Frank Luntz, sampled 1,000 Americans between the ages of 18 and 26. It reveals a generation both disillusioned with establishment institutions and optimistic about the prospects for forging a better future, hinting at why Sanders' call for a "political revolution" is resonating among younger voters.

Here's what Luntz found: While 54% of those surveyed said the nation is currently on the wrong track, fully 61% said the United States' best days still lie ahead, while 39% are convinced that the nation's best days are behind us.

What barriers must Americans overcome to realize those better days? Asked to identify the country's top problems, respondents saw corruption as the chief challenge, with 38% listing it. In his stump speeches, Sanders regularly rails against the money-soaked political system as fundamentally corrupt and beholden to special interests. Other top choices also dovetailed with Sanders' campaign themes, with 29% naming greed as a major problem and 26% selecting inequality.

Broadly speaking, millennials are skeptical of both government and corporate America, with two-thirds saying that corporations are most representative of everything that's wrong with America, and 60% saying the same of Washington.

Millennials' vision of a better society centers on service. Asked to select the career paths they admired most, their top responses were nurses and doctors, teachers and military service. At the bottom of the pack? Real estate agents and bankers.

If it sounds like millennials are just a tad suspicious of capitalism, you're not off base. When asked whether they considered socialism or capitalism a more compassionate economic system, 58% of respondents picked socialism, while only 33% selected capitalism — underscoring why younger voters are largely unfazed by Sanders' self-identification as a democratic socialist.

The Bernie generation? Overall, 45% of those surveyed named Sanders their top presidential choice, with Clinton a distant second at 19% and Republican frontrunner Donald Trump third at 10%. No other White House hopeful garnered more than single-digit support.

Not only is Sanders millennials' top pick for the presidency, he's also the political figure they admire most: 31% said he's the politician they most like and respect, followed by President Barack Obama at 19%, Clinton at 11%, Trump at 9% and Ted Cruz at 5%.

Not all millennials, though, are feeling the Bern. While the Luntz survey didn't break down results by race and ethnicity, an NBC News/SurveyMonkey poll last week found that Clinton bested Sanders 64% to 25% among black millennials, even as white millennials backed Sanders 75% to 22%. Other surveys have shown a less lopsided margin for Clinton with millennials of color. A USA Today/Rock the Vote poll in January found her and Sanders evenly matched with nonwhites between 18 and 34, with Sanders at 42% and Clinton at 41%.

What's exceedingly clear, though, is that Sanders' campaign has tapped both the discontents and the ambitions that define many millennials' worldviews. His imprint, then, is likely to last well beyond 2016.