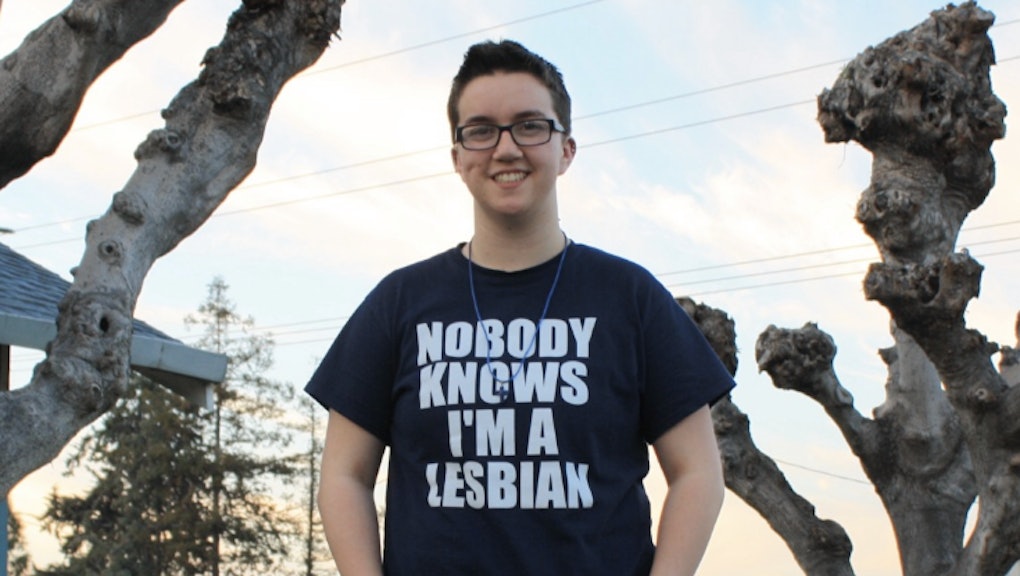 Teens have been exposing and fighting their high school administrators' sexist bans on relatively innocuous clothing for a while now. One of the most egregious clothing-related incidents didn't target a student's appearance or perceived impropriety, however, but her very identity. In August, openly gay California high school student Taylor Victor's administrators sent her home for wearing a T-shirt that said, "Nobody knows I'm a lesbian," according to Cosmopolitan.

Victor hardly took the homophobic blow sitting down. With the help of the American Civil Liberties Union of Northern California, Victor defended her First Amendment right to wear the shirt and emerged victorious. On Feb. 16, the Manteca Unified School District agreed to alter its policy to allow students to wear clothing bearing "statements celebrating their or their classmates' cultural identities," according to the Associated Press.

Victor, who came out a year prior to this incident while in the 10th grade, had felt "pretty safe being out at school so far" when she decided to wear the shirt in question one day early into her junior year, she wrote in a Medium post about her experience. While her peers initially "either didn't even notice my shirt, or had only good things to say about it," the vice principal summoned her to his office by third period, Victor said.

The administrator told Victor to change her shirt because she was forbidden from displaying her sexuality, according to her account. Their fool-proof reasoning, she wrote, was the shirt was "disruptive," displayed her "personal choices and beliefs" and (incredibly) because the phrase could be "gang related" and interpreted as an "open invitation to sex," Victor added.

After administrators doubled down and refused to alter their stance after meetings held over the next few days, Victor teamed up with the ACLU of Northern California to sue the vice principal and assistant principal for censorship.

"The law on this is very clear: Public schools can't censor the personal beliefs of students," ACLU attorney Linnea Nelson told the Associated Press. "The message of Taylor's T-shirt expresses the most fundamental type of speech already protected by the First Amendment, the California Constitution and the California education code."

The court agreed with Nelson and Victor — as have legal bodies ruling over similar issues in other states in the past. Similar cases have emerged in South Carolina, Ohio and Connecticut and resulted in favorable rulings for students to exercise their right to free speech, the Associated Press reported.

Despite these victories, however, it's worth remembering that plenty of obstacles remain for LGBT youth. As many as 40% of the homeless population are LGBT youth. LGBT youth also experience disproportionate rates of mental illness, due in no small part to the discrimination and violence they face, according to the Sexuality Information and Education Council of the United States.

This upsetting reality is why victories like Victor's are so important.

"At the end of the day, I just want other kids to know that it's OK to be yourself at school," Victor concluded in her post. "It's OK to stand up for what you believe in ... I'm very proud of who I am. That's the whole reason I wore that shirt."