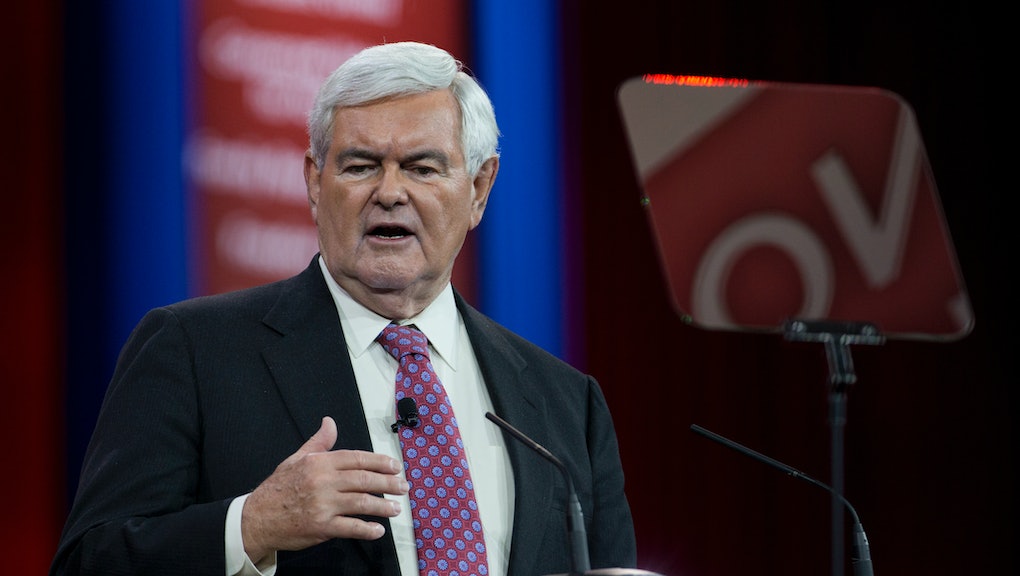 During Monday's episode of Fox & Friends, Gingrich took the hosts to task for giving Trump a massive platform to spread his views — likely referring to the network's wall-to-wall coverage of his campaign as well as Fox & Friends' regularly scheduled Monday segments featuring Trump as a pundit, which ran from 2011 to 2015.

"This time the billionaire is spending the least amount of money and running away with this thing," co-host Brian Kilmeade said, according to Media Matters. It's going to make people... "

"Well, but that's because of you guys," Gingrich interjected.

"Donald Trump gets up in the morning, tweets to the entire planet at no cost, picks up the phone, calls you, has a great conversation for about eight minutes, which would have cost him a ton in commercial money and meanwhile his opponents are all out there trying to raise the money to run an ad. Nobody believes the ad."

The hosts attempted to convince Gingrich that other candidates weren't getting the same mileage out of their program because they chose to do fewer media appearances, but he wasn't having it.

"Look, you could say that Trump is the candidate Fox & Friends invented," Gingrich said. "He was on your show I think more than any other show. It was always a happy, positive conversation."

Gingrich has been a longtime critic of the network's political coverage, though not necessarily as a neutral observer. During Gingrich's campaign for the Republican presidential bid in 2012, he accused Fox of biased coverage in favor of Massachusetts Gov. Mitt Romney, RealClearPolitics reported.

While Gingrich might be correct that Fox played a role in turning the Trump campaign into the phenomenon it's become, the relationship between Trump and the network has actually been less than amicable as of late. Reports suggest network CEO Roger Ailes is resentful of Trump's 180 in his attitude toward the network.

Perhaps it's time Fox & Friends think about a name change.