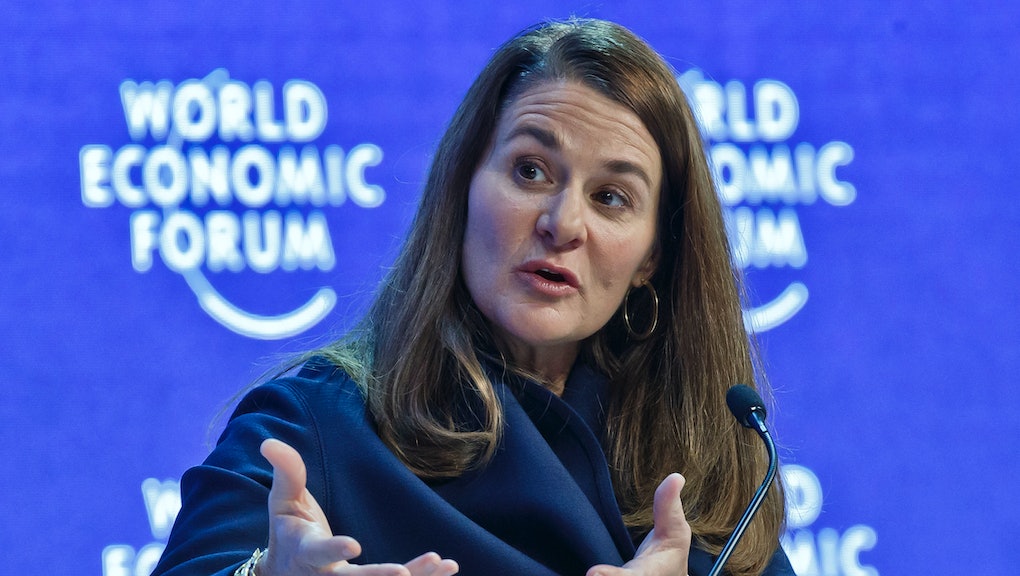 The Gender Gap Nobody Is Talking About

A couple of years ago, I spent a few days with a Tanzanian couple named Anna and Sanare and their six kids. Anna's day started at 5 a.m. with lighting the fire to cook breakfast. After we cleaned up, we fetched water (Anna's bucket weighed 40 pounds). Then we built the fire again for lunch. After lunch we went into the forest to chop wood for the next day's fires. Then we went for more water, then milked the goats, then dinner, then clean-up.

This schedule didn't leave Anna any time to do things that would make life better in the long run. No time to open a business or get a paying job. No time to take her children to the doctor. She had to jam taking care of the family's basic needs into 24 hours. Her daughter Grace attended the local school, but she didn't have time to do her homework, after doing math problems by candlelight, she was always the last to go so sleep.

The human potential that's lost because of this way of life, and the damage done to low-income countries that are trying to prosper, is impossible to calculate. It's the gender gap nobody's talking about.

I'm trying to change that. Every year, Bill and I write a letter about the world's progress against poverty. This year, I'm shining a light on the ways we undervalue women's time—and the ways it holds us all back.

With images of chopping wood and milking goats, it might seem like I'm painting a very far away picture. But, actually, the gender time gap is an everyday reality in the United States and every other rich country, too. American women spend an average of 4 hours a day doing unpaid household work, while American men spend just 2.5 hours. The time adds up. Women spend an extra 500 hours every year doing unpaid household work—hours they could be spending on something else

To be sure, gender norms have changed a lot since I was a girl in Dallas in the 1970s. But nothing has yet dislodged the core assumption that women are responsible for taking care of certain things: the cooking, the shopping, the cleaning, the logistics, and the caring for others, be they young children, sick friends, or aging relatives.

The scariest part is that this assumption operates in unspoken ways and often goes unnoticed. Girls do 100 hours more chores than boys in a year. Boys are 15 percent more likely to be paid for their chores. Mothers may no longer be chained to the stove, but they still do three times more cleaning and four times more laundry than men. Only one out of every 50 people you see in TV commercials doing laundry or running after kids is a man.

No matter who you are, these assumptions will play a large role in your life. If you're a woman, even if you live alone or you and your partner try to divide household chores evenly, you may still find that you're expected to go to work a little less—or pick up a little more—as soon as one of your parents gets sick or you have a child. If you're a man, you may (or may not) notice that the women in your life are expected to fit more responsibility into less time.

So what can we do about it? In low-income countries, time-saving technology can help. A stove and a faucet are more efficient than hauling firewood and a bucket.

But technology alone doesn't solve the problem. We also need to change cultural norms about how women and men spend their time. Part of that is being proactive about redistributing unpaid labor so that women and men share it equally. When that happens, everyone benefits. Studies show that men who take paternity leave have a stronger relationship with their children throughout life. And a recent McKinsey report suggests that, as the time gap narrows, more American women join the paid labor force and become corporate leaders – potentially contributing $12 trillion to the global GDP by 2025.

But for that to happen, we first have to recognize that this is a problem. That's something each of you can do right now. If you already have a household, start a conversation with your partner about who does what—and whether that makes sense for your family. If you don't have your own family yet, let your potential partners know how important it is to you that work in your home is divided equally. And get your friends educated and talking, too, so they can start these conversations in their households.

Once an invisible problem stops being invisible, we can finally start to solve it.

Check out this year's Annual Letter from Bill and Melinda Gates.