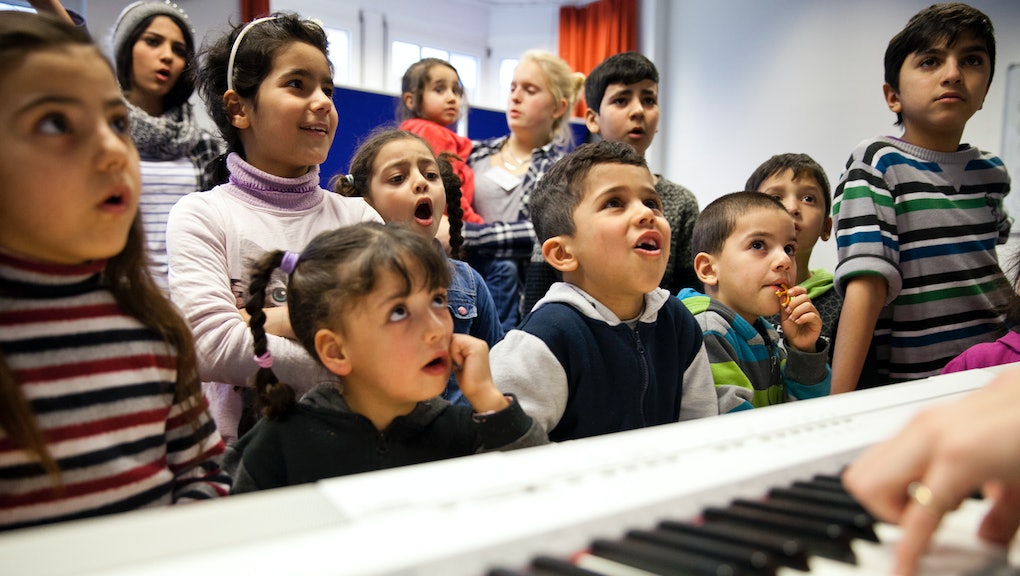 Recent college grad Kate Eberstadt had been watching the refugee crisis unfold when she was nominated for a visiting artist residency at the American Academy in Berlin in September. Eberstadt had heard from a friend working at a German emergency refugee camp that most children at the camp were not enrolled in school. At the same time, Eberstadt learned that a beloved teacher who had encouraged her love of music — Benjamin Hutto — was ill.

All this led to the birth of the Hutto Project, with a mission to "create a safe space for asylum-seeking children to explore and share their voices, by establishing a children's choir within a refugee camp in Berlin," Eberstadt told Mic.

The Hutto Project: While drafting the proposal for her visiting artist residency, Eberstadt wanted to "use art as a tool to provide a source of healing and a platform to those children who had been forced to leave their homes." She also wanted to create a structured outlet for the children who weren't in school.

In considering these goals, Eberstadt was reminded of her experience participating in her school choir under the mentorship of her choir director. Hutto was not only a successful teacher, but a renowned mentor. In fact, late night host Stephen Colbert was one such troubled student who benefitted from Hutto's guidance: Colbert even publicly thanked him for his help shortly before his death, according to the Washington Post.

The Hutto Project, which is still currently raising funds, is Eberstadt's collaborative attempt with friend and Project Manager Sophie Beck to impart those values and bring that experience to refugee children. The project involves 27 of the 44 children in the camp, and participants are between the ages of 3 and 21 years. They live in one Berlin public gymnasium recently converted into a refugee camp. The Red Cross donated a classroom in which three groups of choir members from Iraq, Syria, Afghanistan, Moldova and Palestin rehearse for an hour and a half, three times a week, according to Eberstadt.

Over the course of the project, these groups will compose an original work of choral music, which will premiere at a public concert in Berlin this spring. Guest artists and educators will lead workshops involving a variety of art forms — including theater, dance and creative writing — for the children, which will also be incorporated into their final performance. Eberstadt and her team will also plan off-site excursions in order to engage in the community beyond their camp.

"There is nothing political about a child's need for both structure and self-expression."

"Every child deserves a chance to imagine and create," Eberstadt said. "While this international humanitarian tragedy has adopted political implications, there is nothing political about a child's need for both structure and self-expression. Our program intends to honor both of these needs for children who have been forced to grow up very quickly."

The refugee crisis: Eberstadt's point is a salient one. Though children's particular experiences aren't usually highlighted in refugee crisis media coverage, they face unique obstacles. In fact, children constitute about 41% of the world's refugees, according to the United Nations, .

Even in the best case scenarios, refugee children still face hardship. More than 1 million registered refugees sought asylum in Germany after a rapid influx that prompted a rise in anti-refugee backlash across Europe, Bloomberg reported in January.

On Monday, for example, German onlookers cheered as a former hotel being converted into a refugee home burned in a case of suspected arson, Fox News reported Monday. German citizens have also participated in anti-refugee protests over the past few months, many in response to the now-infamous New Year's Eve attack in which a group of roughly 1,000 men presumed to be refugees attacked 80 women in Cologne, Germany.

The healing gift of music: Given this context, it's perhaps no wonder that children in the camp "jumped at the chance" to not only explore their creative impulses, but form a supportive community. Though they live in the same room, Eberstadt pointed out, the children involved speak a variety of different languages including Arabic, Farsi, Kurdish, Pashto, Russian, German and English.

"Music provides these children a chance to share a common language..."

"Music provides these children a chance to share a common language," Eberstadt said. "Our work together can offer these children bridges to overcome linguistic barriers and get to know each other in a new light."

In addition to fostering a community, music empowers these children, many of whom have experienced trauma, to better understand themselves and their experiences.

"Music takes on a special life form privately, providing new avenues for deepening a sense of self," Eberstadt said. Especially in the context of living in a single room that houses almost 200 people, this creative outlet "can provide interested children another avenue to explore an internal, private domain, something that can be entirely their own," she added.

"To be forcefully uprooted from home is an act of violence, shattering all senses of safety and freedom," Eberstadt said. "Specifically for this group of children, vocal work offers a chance to heal and activate both the physical body and the mind."