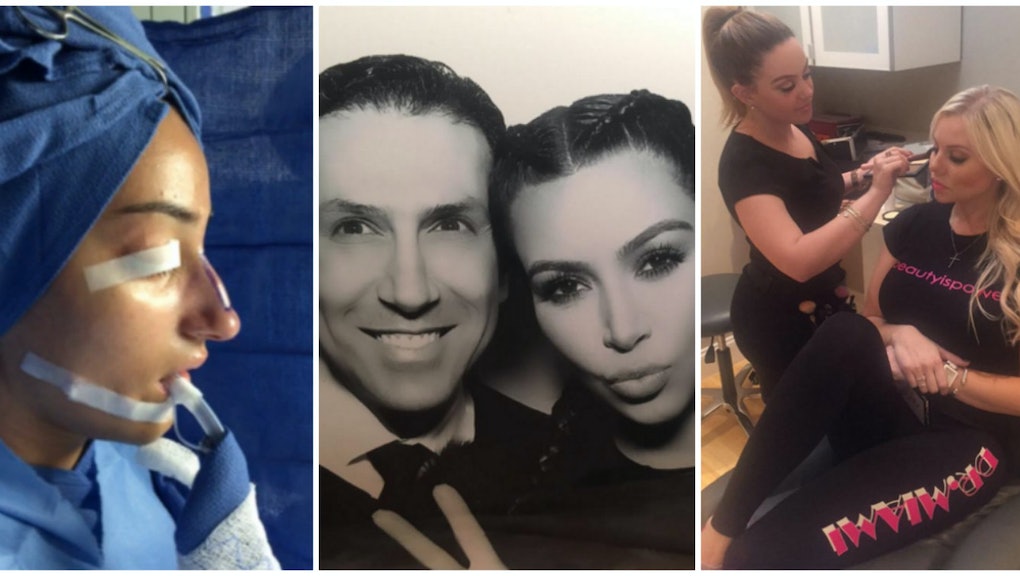 In 2015, at the age of 17, Kylie Jenner got a new pair of lips. With her parent's permission, she underwent a cosmetic procedure to inject fillers into her lips that soon, as we all know, became her signature.

Months later, she openly gushed about the man behind her new pout. "I go to Dr. Ourian in Beverly Hills. He's the best, and he's super natural about it," Jenner told the New York Times. "I was going to somebody before, and it was just looking crazy."

Currently, Dr. Simon Ourian has over 663,000 followers on Instagram. A plastic surgeon, he has created a social media empire by capitalizing on his lengthy list of celebrity clients, many of whom boldly proclaim their love of his work online. Ourian has become a celebrity in his own right too.

And photos and videos of their procedures, needles and all, are living all over people's Instagram feeds.

Broadcasting Botox across social feeds: For these modern plastic surgeons, Instagram is like an artist's portfolio. Each account is littered with hundreds of before and after photos of things like brow lifts and liposuction, stretch mark removal and nose jobs. There are also videos depicting non-surgical procedures, including the rather appealing-sounding "skin tightening."

For Dr. Ourian, a photo of a lip injection racks up more than 5,000 likes. For a breast augmentation, it's more like 6,000. The obsession with "before and afters" isn't new, but it's now got a bigger, constantly-updating platform.

According to Dr. Christopher Balgobin, a cosmetic surgeon based in Minnesota with about 11,000 Instagram followers, people follow him because they're attracted to this concept of a physical transformation.

"They look to find a body type like themselves that they can identify with, and then they're very intrigued by the transformation that's taking place," Dr. Balgobin, who Salzhauer calls "the Dr. Miami of the Great North," told Mic.

The celebrity effect: That transformation becomes even more appealing when it's a face or body that people recognize. Part of the reason why Salzhauer has a large following on Instagram is that he regularly posts and tags pictures of the celebrities and models he's worked with.

At this point, people could very well be keeping an eye on these accounts, waiting for their favorite celebrities or Instagram figures to pop up. Celebrities often return the favor, tagging their surgeons in their own posts. In late 2015, Dr. Salzhauer got a shout-out from Nicki Minaj after he mentioned her on Snapchat.

The presence of celebrities on the accounts makes the side-by-side comparisons more enticing, but also helps boost the surgeons' own fame.

"It first hit me last April when my favorite rapper, Fetty Wap, shouted me out on his Instagram," Salzhauer told Mic. "And then a couple of weeks ago, 2Chainz shouted me out. I stopped at a red light sometime in May, and I looked over and this whole family pointing at me."

That internet fame has had measurable results for these doctors' businesses.

"I'm booked out literally for the year and until the end of 2017," Salzhauer continued. "From a business standpoint, it's helped more than you can imagine. It's affected every part of my life."

According to Balgobin, with an increased social media presence over the past year, "business has gone up by 300%" he told Mic.

The digital trail of tags, selfies and hashtags also offers a peek behind the curtain, and into an industry that has been so secretive for so long.

When surgery loses its stigma: The rise of surgeons on Instagram is both contributing to and also the direct result of the lessening stigma of surgery. Before Instagram came into our lives, we were already witnessing a rollback of the stigma associated with plastic surgery.

In the 1950s, Marilyn Monroe's work was hush-hush. By the '90s, Pamela Anderson became unabashedly famous for her plastic parts, giving plastic surgery a more popular but still not quite accepted glow. Even into the 2000s, tabloids trumpeted shame-tinged announcements of celebrities' rumored surgeries, trying to root out the fakers.

But the norm has slowly shifted, thanks in part to TV shows like Dr. 90210, The Doctors and The Biggest Loser, which readily showcase plastic surgery.

"You now see all this stuff in your face," Balgobin said. "You turn on a TV at 4 p.m. on Monday and it's right there in front of you."

An even bigger influence comes from celebrities doing the trumpeting themselves, directly or indirectly, on social media. When a plastic surgeon tags a celebrity in a photo or gives them a shout out, the celebrity has already given approval.

"The mere fact that Kylie Jenner did something to her lips is one thing, but the fact that she openly admitted to it, I think that had a big influence on teens' perception of it," Salzhauer said. "It's like 'Hey, even at 17, you can do things to change your body.'"

Creating IRL filters based on online ones: The omnipresence of those celebrities clearly influences desires. Thanks to the "Dash Effect" in late 2015, U.K. cosmetic surgery group Transform reported that there was a 73% increase in people coming in with Kardashian or Jenner pictures as references. On the Kylie Jenner front in particular, they saw a 700% increase in requests for lip fillers since she admitted to having them.

People looking up to celebrity bodies is nothing new, from Monroe's bust to Jennifer Lopez's butt. What is new is also looking to Instagram, not just at celebrities but regular people too. Salzhauer said his popular Brazilian butt lift procedure is a direct result of Instagram's own brand of perfection.

"On celebrities and these idealized bodies like Kim Kardashian and Amber Rose, people want to look like that," Salzhauer said. "And people who have that body are on Instagram."

That's not just celebrities, but the less famous yet equally beautiful people cluttering your feed, showing off their own Kylie pouts or Kim butts alongside your own selfies. Dr. Elie Levine, a New York City-based plastic surgeon, is just one of the doctors who told Mic it's not uncommon for people to walk into the surgeon's office with a picture from Instagram as inspiration, rather than a page ripped from a magazine.

"Now that people are taking so many pictures of themselves from so many angles, they have a better understanding of their imperfections," Levine told Mic. "And because of that, I've seen a lot more people wanting to fix some part of their face."

The irony, of course, is how we see and evaluate the bodies we want, especially on platforms like Instagram where photos are already edited. According to the doctors who spoke to Mic, it's Photoshop and similar apps like FaceTune — not the plastic surgery industry itself — that's giving people unrealistic expectations.

"I feel like the fact that people have to look perfect and fabulous is great on Instagram," Salzhauer said to Mic. "But I don't think that's so good for people. I don't think it's great for people well-being and development, seeing these completely unrealistic pictures and thinking 'This is what I want to look like' because we cannot make you look like that."

"Every day someone comes in with a picture that they think we can recreate on them," Balgobin said. "And we can't. The filters don't give you what's physically possible."

Levine echoed the point. "There are other people that come in to get a nose that isn't even possible," he said, "because the picture they're showing me on Instagram has been edited itself."

In that sense, the doctors tout their unfiltered social feeds as the honest images out there. In a world of fake Instagram photos, seeing unfiltered "before and afters" makes these accounts the realest Instagram has to offer, they say.

"Think about it. You're putting all your work out there, unedited," said Balgobin. "And what we're selling is confidence."

The teenage allure of transparency: As cosmetic surgeries and procedures find audiences on social media, celebrated by the surgeons and their celebrity fans, it's unsurprising that one group has been affected the most, according to all the surgeons Mic spoke to: young people.

"It's shifted the average down by about five years," Salzhauer said. "My average patient age was 30 and now it's 25 and I get a lot more girls in their late teens coming in."

After all, there is nothing teens love more than a behind-the-scenes look on apps like Instagram and, even more so, Snapchat. Salzhauer says he has 700,000 viewers a day on Snapchat, where he uses no filters or video tricks for videos of his procedures.

"The allure is transparency," Salzhauer said. "People are curious and on my end, people are getting to see exactly how a procedure is done. So then they trust me."

And then, business grows.

Currently, he is nominated for a Shorty Award, which awards people who have an outstanding social media presence, for Snapchatter of the year. His fellow nominees? DJ Khaled and Kylie Jenner.