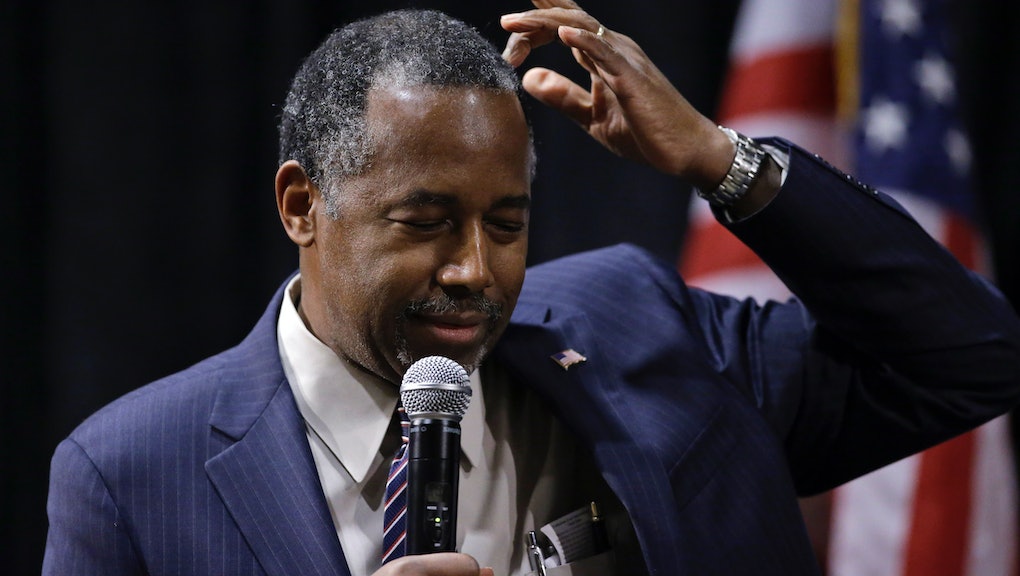 In a race where the 2016 Republican presidential candidates are outdoing each other with bombastic comments, it's hard to imagine being more outrageous.

Ben Carson has delivered for us.

Carson, the only black candidate in the Republican field, said that he understands race and the way race affects the average black American more than President Barack Obama does because Carson grew up in poverty in Detroit — his mom even received government assistance.

"He's an 'African' American. He was, you know, raised white," Carson told Politico, shortly before he came in sixth out of six Republican candidates in the South Carolina primary. "I mean, like most Americans, I was proud that we broke the color barrier when he was elected, but ... he didn't grow up like I grew up ... Many of his formative years were spent in Indonesia. So, for him to, you know, claim that, you know, he identifies with the experience of black Americans, I think, is a bit of a stretch."

This is not Carson's first time saying something a little off-color. In the past, he's come out against women in military combat roles, and against transgender people in the military altogether.

Carson also commented on American racism, which he said is inextricably mixed with classism. He used that fact to downplay racism as a factor in the Flint, Michigan, water crisis.

"Remember now, I've been around for 64 years, you know," he added. "I've had a chance to see what real racism is."

Carson has stayed mostly mum on racial matters. Now, in one of Carson's attempts to speak on the issue, we can kind of see why he's kept his mouth shut. By Carson attacking Obama for not understanding his black experience, he's implied that Obama doesn't understand all black experience. In other words, Carson is saying there's only one way to be black.

In limiting the idea of blackness to suit his political needs, Carson is not just disrespectful and rude to President Obama's experiences as a black man, he's also just wrong.