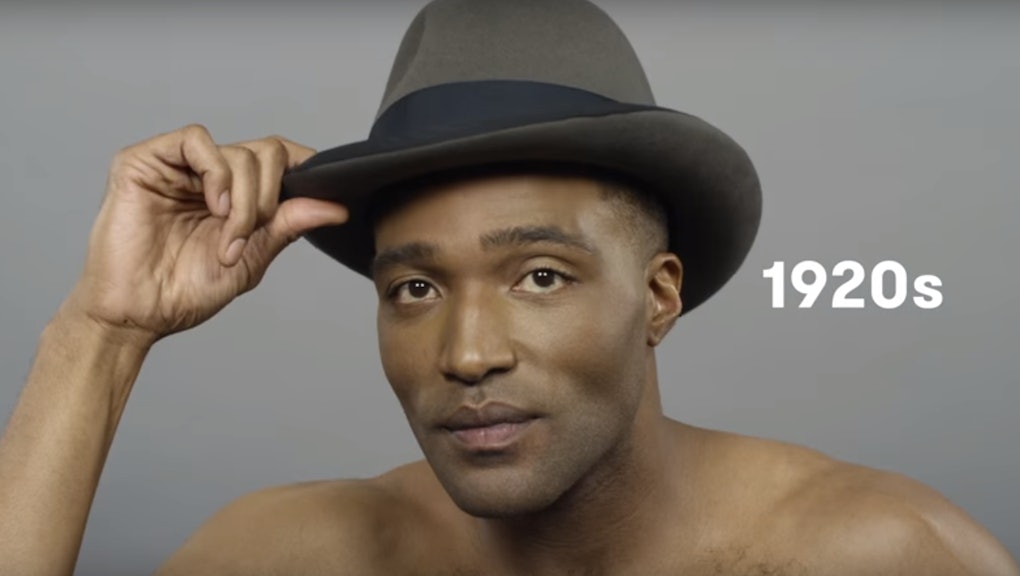 Another day, another mesmerizing time-lapse beauty video to lay your eyes on.

Previously, the team dug deep into white male beauty and black female beauty; with this video, they made an effort to take another look at the century through the lens of the African American man.

"We've explored hegemonic male beauty in the first video, but during the entire time that 100 years was happening, there was a complete other but parallel beauty tradition for black men," Chris Chan, WatchCut's visual anthropologist, says in a video that reveals the extensive research that went into making the video.

The video couldn't have come at a more crucial time, as certain men's hairstyles seem to be up for debate, from man buns to man braids (see also: cornrows). When we talk trends nowadays, and especially hair trends, it's critical to understand where black history fits into them, and whether or not these trends really started with black men's hair first. It's about giving credit where credit is due.

So to answer those questions, the team has revealed the exact inspiration for each of Lester's looks, which only makes them take on a deeper meaning and show just how culturally significant African-American hair has been over time.

Here are just a few of the decades and their inspirations:

For the 1910s, Chan and his team found inspiration in a photograph from Duke University's archives. Apparently back then, it was almost unheard of to leave the house without a hat, so that's the look Lester tried on for himself.

For the 1930s, they modeled Lester's look after Donald Sheffield Ferguson, the first black medical student at Kansas University. The hair was left fairly neutral, but worn with a sharp part on the side, which was Ferguson's signature.

According to Chan, it was important for the video's creators to highlight just how many African-American men fought in World War II during this decade, so the inspiration came from none other than the Tuskegee Airmen. For the look, Lester appears fully shaven (and quite handsome) with a military cover.

"One thing we really wanted to be clear about in this video is that hair and politics are always intertwined," Chan says. That is never so obvious as with the look in the 1960s, when Lester takes on the appearance of Huey Newton, one of the founders of the Black Panther Party, by donning an afro and a black beret worn to the side.

For the '80s, our fearless model takes on the look of the artist Jean-Michel Basquiat. It's a look that may look pretty familiar to you now, since R&B artist the Weeknd is a fan,and has explicitly said  the visual artist is the inspiration for his own look. Just goes to show that everything old is new again.

And for our current era, the team took inspiration from a style that's common for basketball players, as well as men like Macklemore, which Chan is eager to point out. This high-top hairstyle with a fade is popular across almost all races, at this point.

"In a century, we have white men going to black-owned barbershops to get their hair done because it's part of a longer southern tradition," Chan notes at the end of the research video.

So as we continue through this decade, we can only expect to see how the past informs the present when it comes to hair fads and rituals. But maybe after seeing this video, people will start giving them some credit.