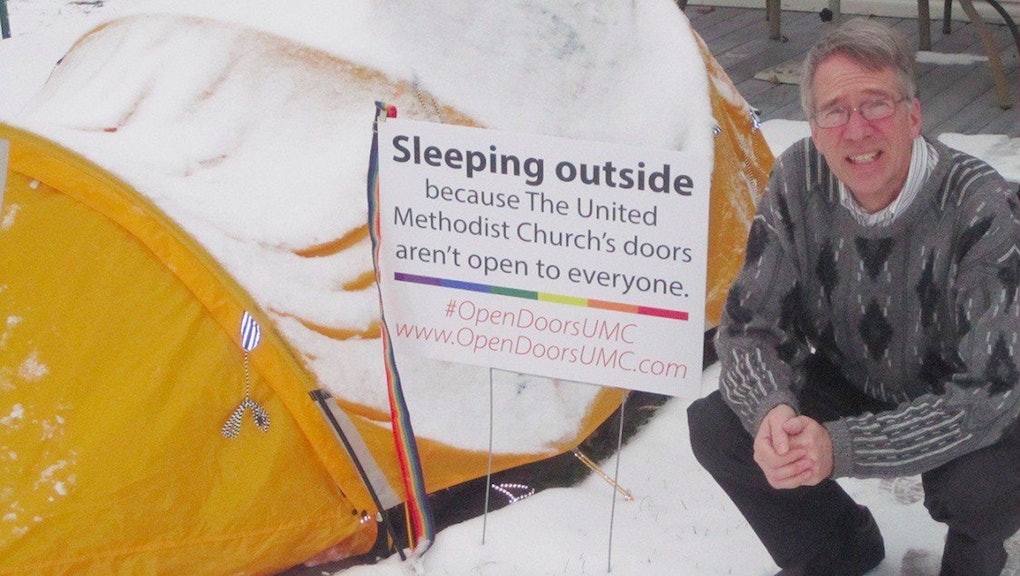 A Methodist pastor in Parchment, Michigan is sleeping outside his home in the bitter cold to protest his church's treatment of LGBT people.

Rev. Michael Tupper vows to keep up the protest for 175 consecutive days in the hopes of drawing attention to the United Methodist Church's opposition to same-sex marriage, which it considers "incompatible with Christian teaching," reported ThinkProgress. Tupper told the site he became the target of a church inquiry after performing a wedding for his daughter, who is a lesbian.

"I chose to do that, and complaint was filed," Tupper told the site. "All of [a] sudden it became so clear to me — the discrimination against LGBT people in the church ...  Most nights it gets into the 20s. It's gotten down to 5 degrees. Yeah it's cold. But I've managed."

His method of protest, he continued, is symbolic of "how we push LGBT people out of the church and into the cold."

Tupper is part of an increasingly vocal percentage of American Christians who have said they want their religious institutions to be more inclusive, according to a Pew Research Center poll from December.

According to the poll, 54% of Christians now agree "homosexuality should be accepted, rather than discouraged, by society" — that's up from 44% in 2007. The only denominations to dip below the 50% support mark were evangelical Protestants, Mormons and Jehovah's Witnesses.

The UMC is in the midst of a heated debate over LGBT inclusion, with a number of bishops refusing to penalize pastors who perform same-sex weddings. Some have even performed them en masse, reported ThinkProgress.

In July, Tupper said he and a number of other pastors who attended a same-sex marriage ceremony Tupper officiated could face official discipline by the church.

Find out more about Tupper's quest via the hashtag #OpenDoorsUMC.