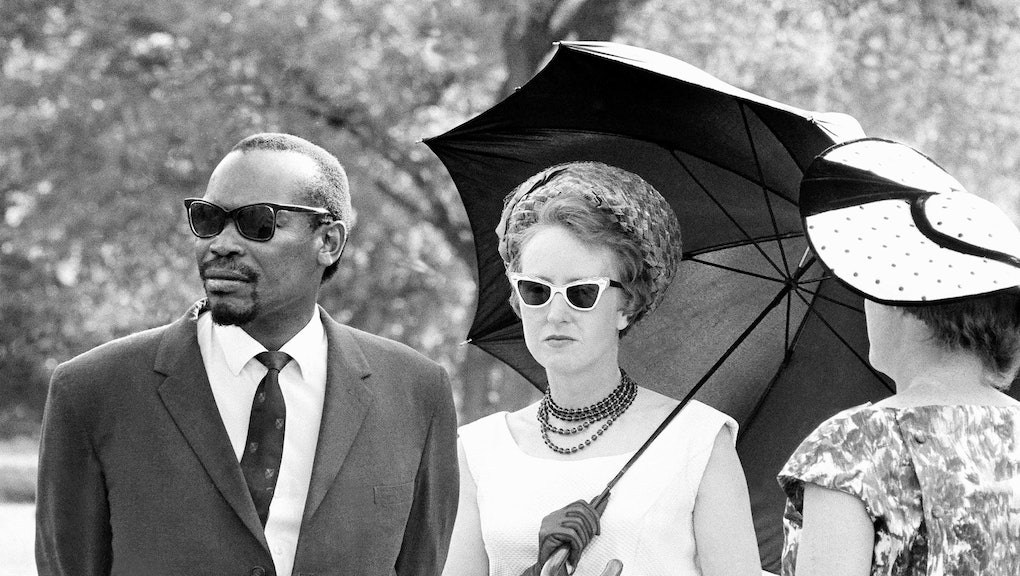 Ruth Williams probably had no idea what she was getting herself into when she married Seretse Khama in 1948. The young woman was working as a clerk at an insurance market when she met Khama, an international student living in a nearby hostel who would quickly become the love of her life, according to the Guardian.

Little did she know at the time that he would become the first president of an independent Botswana, a landlocked country in the heart of southern Africa, and she Botswana's first lady. But the two would have to overcome death threats, including from their own family, and multiple obstacles meant to block their marriage before they could lead the country through massive progress and change, including the negotiation of Botswana's sovereignty, universal education and a multiracial democracy.

Interracial dating is becoming increasingly accepted in United States society, though it's still far from the norm. Pew Research Center reported a record high 12% of Americans wed someone of a different race in 2013. Almost all millennials accept interracial dating and marriage, representing a change in attitude among the younger generations. Khama and Williams broke boundaries and fought for tolerance in an intolerant world — and ended up leading a country.

Without couples like Mildred and Richard Loving, for example, interracial marriage would still be illegal in America. The newlyweds had gone to sleep on July 11, 1958, when three police officers stormed their Virginia home and arrested the two for their marriage in Washington, D.C., a few weeks prior, according to Biography.com. The two were forced to wed in D.C. due to their Virginia's Racial Integrity Act, which deemed marriage was only acceptable when it was between people of the same color.

"As long as you live you will be known as a felon," the judge told Mildred Loving after the two were charged with defying the law, according to PBS. The couple moved to Washington, D.C., where they began working on Loving v. Virginia with the American Civil Liberties Union. In 1967 the United States Supreme Court determined any state law meant to block interracial marriages was unconstitutional.

It took America until the turn of the century for the prohibition of interracial marriage to officially end, when Alabama repealed its discriminatory law in 2000, according to PBS.

When Louie Bellson became Duke Ellington's first white band member in 1951, marrying Pearl Bailey after falling in love with the fellow musician likely complicated his career even further, and the two were forced to lie about her heritage throughout southern U.S. states, claiming Bailey was Haitian, according to AFK Insider.

However, the two persisted in the music industry and were married for 38 years before Bellson's death in 2009, according to Listverse. Pearl Bailey embedded herself in the Republican party; Bailey served as the United Nations' Goodwill Ambassador for several Republican presidents. Bailey even remained a member of the party, where she found acceptance for her interracial marriage, during the civil rights movement throughout the 1960s.

The fight for interracial marriage dates as far back as many other civil rights issues — just look at the story of Frederick Douglass, a slave-turned-social-reformer, and his wife Helen Pitts, a suffragist and abolitionist. The two didn't only have to fight for the acceptance of their love, according to AFK Insider: They each took part in fighting against slavery and for women's rights.

The relationship was shrouded in controversy from the very beginning, however. Here's an excerpt from when the New York Times announced the marriage on Jan. 25, 1884 via About.com:

Washington, Jan. 24. Frederick Douglass, the colored leader, was married in this city this evening to Miss Helen M. Pitts, a white woman, formerly of Avon, New York. The wedding, which took place at the house of Dr. Grimké, of the Presbyterian church, was private, only two witnesses being present. The first wife of Mr. Douglass, who was a colored woman, died about a year ago. The woman he married today is about 35 years of age, and was employed as a copyist in his office. Mr. Douglass himself is about 73 years of age and has daughters as old as his present wife.

Both outspoken activists died after doing what they loved. Douglass died of a heart attack in 1895 on the same day he delivered a speech on women's suffrage, according to AFK Insider. Pitts died in 1903 after working on a women's rights publication called the Alpha, founding the Frederick Douglass Memorial and Historical Association and working to ensure Douglass' home would be preserved as a historical landmark, according to About.com.

No matter what obstacles these couples faced, their challenges and triumphs paved the way for millions after them, from New York City Mayor Bill de Blasio, the first American mayor married to a black wife to take office, to entertainers such as Kim Kardashian West and Kanye West, as well as millions of others marrying their love based on heart and character rather than their skin.