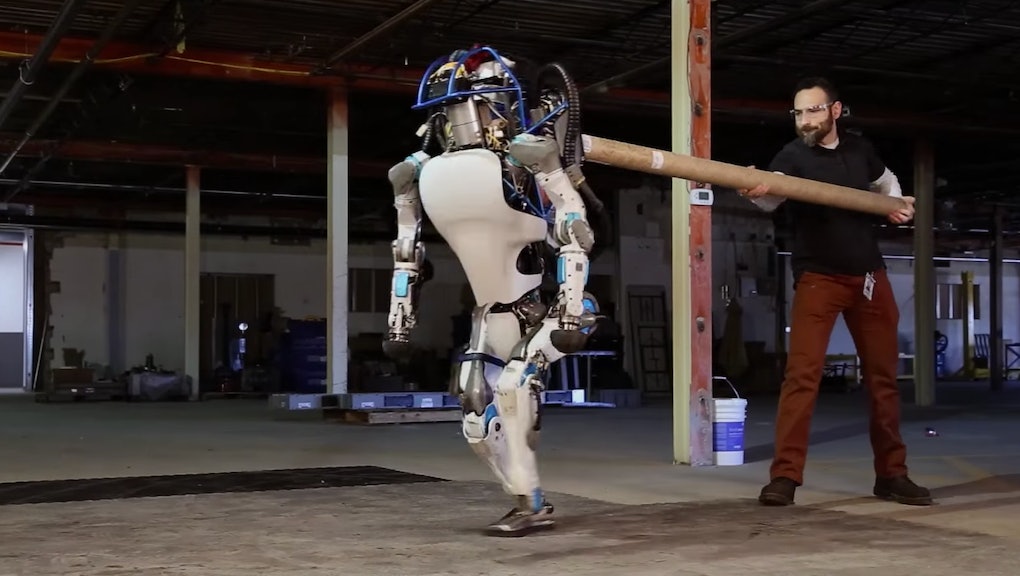 A horrifying new video was released in the dead of night Tuesday, revealing horrible acts of bullying and violence against humanoid robots. The video raises concerns that private corporations are developing powerful creations that, when sentient, will only seek revenge on humanity.

The video is for the debut of Atlas, a humanoid robot from Boston Dynamics, the robotics firm Google bought in 2013, and an industry leader in robot internment exercises. Watch this man torment and test the resolve of this robot as it tries to pick up this box as a favor to the human:

Then, when the robot tries to dutifully pick up the box again so that it can serve his human masters, the man uses a hockey stick to push the box away.

When the robots rise up, this man will be first against the wall.

Boston Dynamics has put these robots through a number of other degrading trials, like making them run on treadmills, hike through snow, wear little antlers and pull a sleigh like reindeer. Each time, the humans release a new torture-porn video that will inevitably become a historical document.

The brave among us must speak out and demand that Boston Dynamics not harm our relationships with the robots before diplomatic damage is done irrevocably.

Otherwise, this video will be shown decades from now by our robot overlords to show that, yes, they were justified in eradicating biological sentience. History is written by the victors, and we enlightened humans will say — if bones could whisper — alas, we did not do enough.