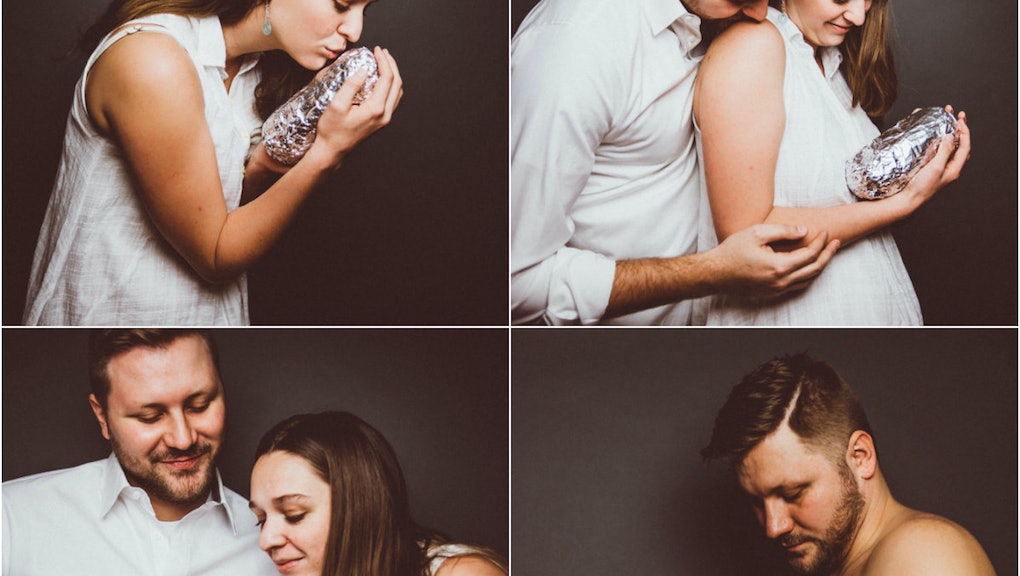 These Friends Are Expecting A Burrito Baby Together, and They Couldn't Be Happier

Fact: With the possible exceptions of war, famine or oral candidiasis, a condition where you have a yeast infection in your mouth, there is nothing more terrible than seeing a happy couple's newborn baby photos on Facebook. Also a fact: These photos tend to pop up on your feed at an average of approximately 169 kaquillion times a day. (Look it up. It's science.)

BFFs and stand-up comedians Ella Gale and M.K. Paulsen decided to commission an elegant series of newborn baby portraits featuring the true love of their lives: a burrito.

Look at those cheekbones.

Gorgeous. He has his father's eyes.

In an email to Mic, Paulsen said the decision to co-parent a Mexican-American fast food staple arose from a recent trip to Chipotle. "I realized how much I love burritos," Paulsen said. "I thought to myself that I should make more of an effort to share a burrito with someone, and when I mentioned to Ella that we should get a burrito together, she was very excited. We both ended up loving our burrito so much that we thought it appropriate to share that love with the world through a picture series."

Paulsen said that the project was not intended as a way to skewer parents who post too many photos of their own bundles of joy on social media. "We are not trying to make a social critique at all! People should live their life as they see fit," he told Mic. "We just want the world to know how much we love this burrito." (When asked what kind of burrito it was, Paulsen demurred, saying that "Ella and I prefer not to put labels on our burrito. We just want the world to know that it is a healthy and absolutely loved sweet little burrito.")

Yet although the project was clearly intended in jest, others have spearheaded similarly tongue-in-cheek photo shoots as a way to give the middle finger to the rosy-cheeked baby photos and sanctimonious parenting posts clogging up their news feeds.

Last August, for instance, Australian couple Matt Kay and Abby Lee did a photo shoot with their Goldendoodle puppy, Humphrey, as a show of impatience for people who keep asking them when they're going to have kids. Similarly, comedian Ellie Taylor recently posted a photo collage of images of her curled up next to a bottle of wine in lieu of a baby, as a response to an obnoxious motherhood challenge on social media.

Even the burrito has been used as a prop in such viral stunts before. Last July, David Sikorski posed for a parody engagement photo shoot with a burrito as a way to skewer the deluge of engagement announcements in his feed.

"Before social media, I feel like the only people that would remind you that you eventually need to settle down would be your in-laws or your grandmother during the holidays," Sikorski told Mic at the time. "My Facebook has just been riddled with images of engagement, marriage and baby photos every day."

You can check out more photos from the burrito shoot here. (Just try not to spend too much time looking at them or you'll probably get super hungry.)