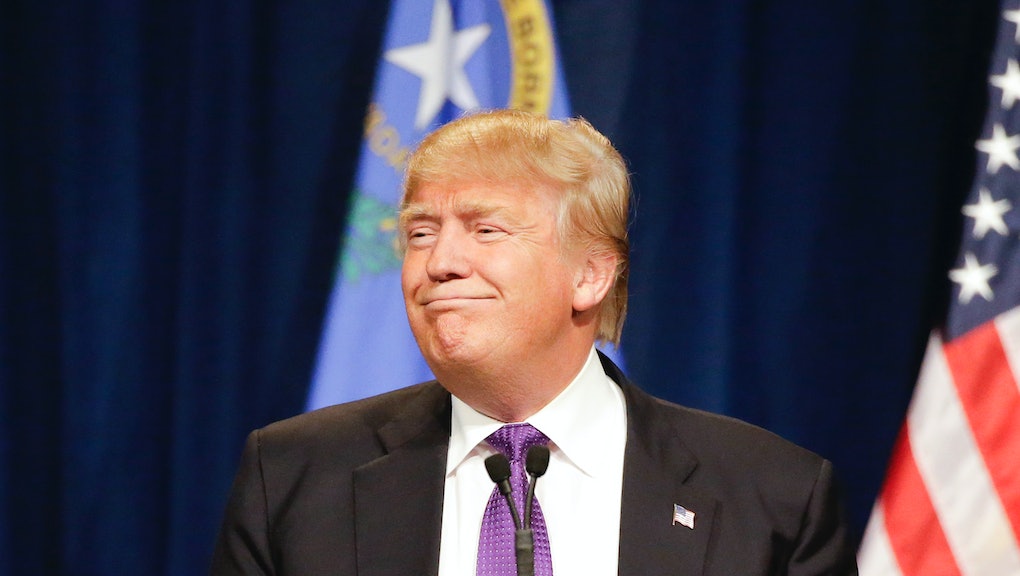 Can the GOP Establishment Come to Terms With Donald Trump?

They said it couldn't be done. Donald Trump is proving them wrong — with a vengeance.

Eight months ago, Trump rode an escalator — his own — into the fight of the Republican nomination for president. A lot of people thought it was a joke. A vanity play. He'd never get anywhere. Right?

On Tuesday, Trump clocked another impressive early state win, this time in the Nevada caucuses, where he ran away with about 46% support. It was his third decisive victory in a row, following first-place finishes in New Hampshire and South Carolina.

Trump has skillfully made himself the leader of an angry swath of the primary electorate enraged at Washington and its own party. Sure, he doesn't represent every GOP voter, but it doesn't matter — the rest of the field has been so fractured that Trump's cadre of impassioned, disillusioned supporters is enough to make him the standard bearer of the Republican Party.

The establishment is now staring that reality in the face, one that was unthinkable just months ago. How — if — they reckon with Trump will be one of the defining political events of this generation.

Coming to terms: Republican consultant Reed Galen, a Bush administration veteran who also served as deputy campaign manager for Sen. John McCain and Arnold Schwarzenegger, told Mic a big part of the GOP is still struggling to truly get its head around Trump.

"The predicate needs to be that he may be the nominee. They're not even that far yet — they're still in the fourth stage of grief or whatever," Galen said.

Republicans will have to choose, he said, between a path of acceptance or denial, and the pull of the latter is still powerful despite Trump's obvious ability to strike a chord with the GOP electorate.

For many of the "establishment" rank and file, Galen said, "there's the honest and true belief to their core that Trump would eventually implode — that self-immolation would take place [and] the contest would reset itself along much more traditional lines."

That hasn't happened. To date, Trump has won 81 delegates, with outright victories in New Hampshire, South Carolina and Nevada and a second-place finish in Iowa, compared to just 17 delegates each for his top rivals Ted Cruz and Marco Rubio.

There's certainly a good amount of money and panic that can be poured into an anti-Trump movement, but it's important to remember that sheer celebrity helped get Trump to where he is. He's a household name in a way his competitors simply can't match — and those years spent in the public eye also served as a default vetting period during which his dirty laundry had plenty of time for airing.

"If you're Marco Rubio or if you're Ted Cruz, there's literally almost no amount of money that can overcome that," Galen said.

Put out any ad you want, he added, but "unless it shows Donald Trump personally drowning a puppy in a lake, what are you going to say about him that hasn't been already said?"

As for the latest wave of Trump-related trauma among party loyalists, who are now once again talking up ways to band together to defeat the frontrunner, "Why didn't we do this six months ago? We didn't believe it," Galen openly admitted with an eye to the Republican insider group he says "tends to run campaigns, win campaigns and then set the narrative and the rules."

It ain't over 'til it's over: Many Republicans still insist it's way too early in a volatile cycle to call the whole race for Trump. There's a debate coming up Thursday night in Houston. There may be a new sense of urgency about stopping the Trump juggernaut. Voters in larger, more moderate states may not buy into the fear-flavored messaging that's carried the billionaire this far in the fight for the nomination.

In short, if Trump wants to "Make America great again," he's still got a lot to prove.

"Trump has done well playing to small subsets of the broader electorate. What remains to be seen is if he can put a voter coalition together that includes the supporters of all the folks he's been insulting for the last eight months. He will need them," says Thomas Basile, a Republican commentator and former executive director of the New York state GOP.

"Trump hasn't demonstrated that he is looking out that far or with that level of detail about winning the general on a state-by-state basis at this point. Rubio is broadening his appeal and as a result has momentum in terms of raw numbers," Basile told Mic.

"His task is to convince GOP primary voters that Trump is not inevitable and that his nomination would hand the election to the Democrats," Basile said. "Of course, eight months into the Trump phenomenon, no one has really taken the gloves off and hit him hard."

A practical approach: Other GOP stalwarts are embracing the most pragmatic approach possible to a potential Trump administration.

After all, the path to victory is paved with the carcasses of campaigns run by Republicans who waved warning signs about Trump — and got personally attacked with unvarnished glee in response. And even before he scored his first victory, Trump's numbers were up among GOP voters asked if they could accept him as party's candidate.

Tim Albrecht, an Iowa public relations consultant who worked for the now-defunct Jeb Bush campaign, is one of them.

"Trump's lack of concrete policy proposals should be viewed as an opportunity for Congress to regain some of its Constitutional powers that have been whittled in recent years," Albrecht told Mic when asked to take Republicans' temperature on the Trump phenomenon.

"Republicans will focus on securing a Republican majority in the House and Senate, with the hope that if legislation reaches Trump's desk, he will sign it," he said. "Or conversely, if Trump were to be unsuccessful in the fall, the GOP will have a firewall against a President Sanders or Clinton."

Reality bites: The Trump campaign may have started out as a sideshow. Now it's the main event.

After learning that big crowds aren't everything, courtesy of that second-place finish in Iowa, Trump upped his ground game in New Hampshire. Those who wanted to call that big Feb. 9 win a fluke, or say Trump had an advantage there because of his campaign manager's Granite State roots, got served up a big helping of Trump victory Saturday in South Carolina.

And while Trump still shoots from the lip in his inimitable way, it's tough not to see he's become more disciplined on the campaign trail — the self-styled outsider evolving into more of a politician, if you will.

If anything's going to happen to break Trump's stride, aside from a last-minute independent run by former New York City Mayor Michael Bloomberg or someone of similar wealth stature, it has to happen soon — and it would have to be, well, huge.

"No, it's not yet time for everyone to roll over for the Trump machine. The other candidates can still pull it together, by unifying behind one [person]. However, their window is closing fast," said Charlie Banks, a GOP strategist at New York-based Red Pillar Consulting.

"With the anti-Trump vote divided — and that's what it is; by now, he's no one's second choice — Trump doesn't just win primaries. He gets GOP superdelegates as well, who, unlike their Democrat counterparts, are pledged to support the candidate who wins their respective states. That way, he pulls further ahead even outside the winner-take-all states," Banks said.

"Right now, the best the anti-Trump bloc can hope for — outside of a cataclysmic reversal — is a brokered convention by denying him a majority of delegates. That won't be an option for much longer if he keeps winning superdelegates and goes into the winner-take-all states with his opposition still divided."

Republican leaders will see their followers at the Super Tuesday polls Tuesday. What they see in the mirror the morning after is anyone's guess.