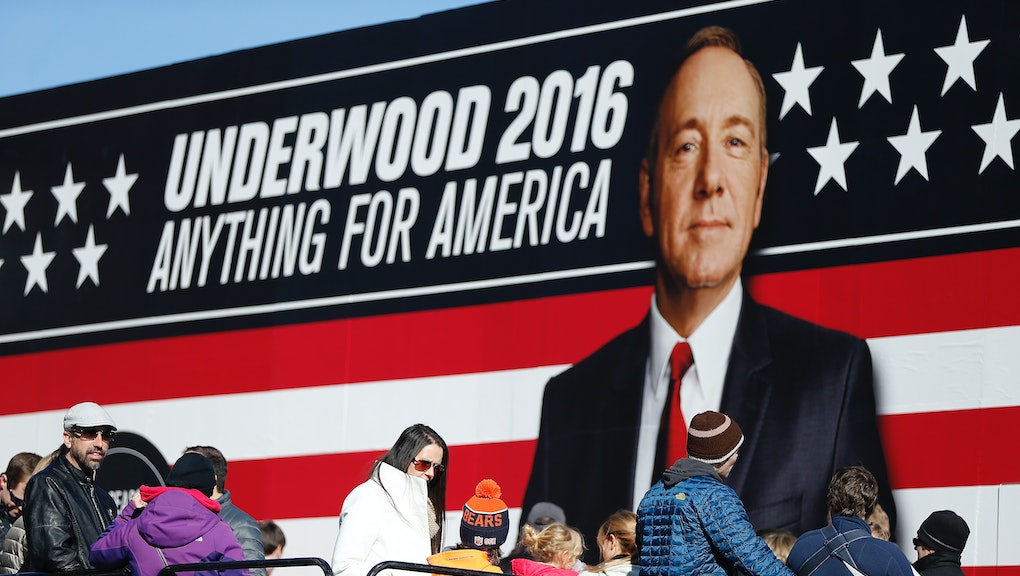 ‘House of Cards’ Premiere Spoilers: Get Ready for Another Term With President Underwood

Netflix sure loves its original series House of Cards. Ahead of the fourth season's premiere on March 4, the streaming service has already renewed the show for a fifth season in 2017, which means we'll be getting even more of Frank Underwood (Kevin Spacey) past what hasn't even aired yet.

The enigmatic and oft-controversial character on the series — currently the president of the United States — dealt with a lot of turmoil last season, politically and personally, from Russian Prime Minister Viktor Petrov (Lars Mikkelsen, essentially playing Vladimir Putin) and his FLOTUS Claire Underwood (Robin Wright), respectively.

Entering season four, if the marketing for the show is any indication, we're looking ahead at a continued clash of power between Claire and Frank, coupled against the backdrop of another presidential campaign for Underwood. Here's some of the best promotions prior to the premiere.

Editor's note: Spoilers ahead for season three of House of Cards.

Broadly, what the House of Cards marketing team employed are fictitious political stunts for Underwood, in the vein of what actual presidential candidates are doing for 2016. It seems an obvious choice, to be sure, but good marketing requires not just a good concept but a great execution.

It began in December, in conjunction with the Republican party's final presidential debate of 2015 in Las Vegas. Online, the House of Cards official Twitter account unveiled the "Underwood 2016" poster. On TV, the "campaign" aired a 30-second spot to commemorate the American values Underwood instills.

Additionally, Netflix released trailers in January — the first in the same vein as a presidential address to the American people, cleverly edited to include cuts back to the show and some of Underwood's most morally questionable acts to date.

A second clip shows Underwood's chief of staff, Doug Stamper (Michael Kelly), dig a hole aside the president, all with press in attendance. It's an intriguing scene, with Underwood eyeing Stamper as he digs his spade into the ground — a callback to the character murdering Rachel Posner (Rachel Brosnahan) — who had ties to the murdered congressman Peter Russo (Corey Stoll) — at the end of season three, and disposing of her body in a similar vein.

The first, and only, full-length trailer for season four was released earlier in February. It hints at Frank's impending separation from his wife, but with the intense score of a thriller — featuring quick shots of blood, sex, prison and Capitol Hill. From what's been revealed, it's evident that Frank's potential divorce with Claire could undermine a reelection for the Democratic candidate, much to her delight.

As a viewer, knowing the extent of the actions to which they've both gone for the sake of power, it's clear there will be no love lost as they attempt to undercut one another's plans and aspirations.

Additionally, the creative team has also moved with the campaign trail, creating an Underwood 2016 billboard in Greenville, South Carolina — at the same time as the Republican presidential candidates moved forward at the South Carolina primary. On Twitter, the series' account shared a time lapse of the billboard being set up.

Finally, in a delightful, penultimate step prior to the much-anticipated premiere, the Smithsonian National Portrait Gallery unveiled a stunning new portrait of Underwood. Spacey was there to present a speech, in character as Underwood, with the president's typical Southern charm.

While other candidates will actually try and hold real office at the White House, the fictitious Underwood has rigorously campaigned in his own right, in the midst of the strife within his own home. For viewers of the show, it's fun to watch the puzzling Underwood campaign — though it's safe to assume none of us want a murderer as commander in chief.

Though we can expect Underwood to campaign with the same vigor in season four, the only way to know for sure is to tune into Netflix on March 4 — and, in typical Netflix fashion, binge-watch the new season away.