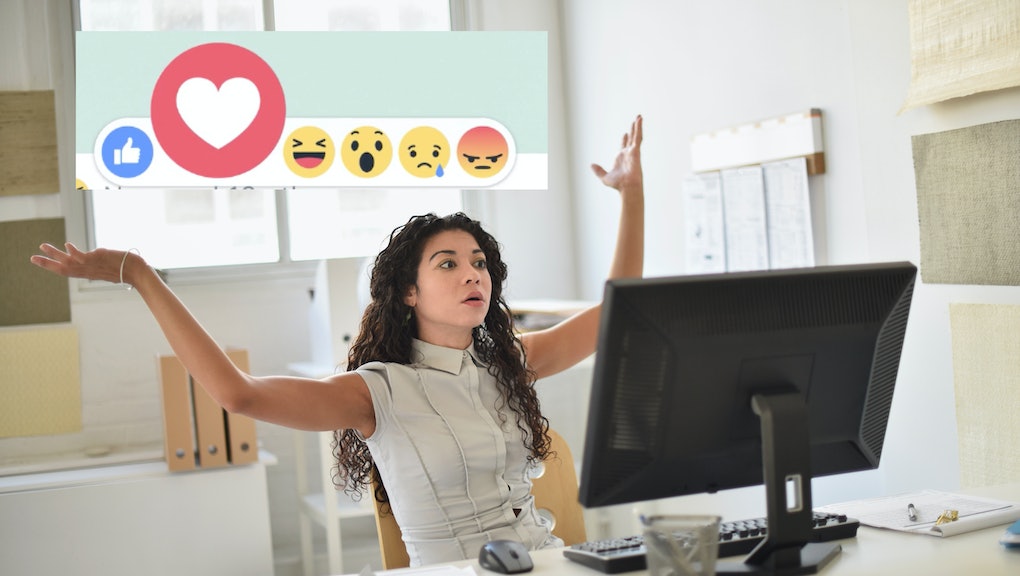 In terms of its impact on the world of communications technology, the response fell somewhere in between the release of the first iPhone and Johannes Gutenberg's printing press. Which is to say, everyone lost their goddamn shit.

At this point, you might be thinking, "I don't like change, because change makes me think of the inevitability of my own fragile mortality. How can I go from 'liking' my friends' dank memes to 'loving' them? The mind trembles at the thought."

Or maybe you're thinking: "How can Facebook ask me to learn how to use five new reaction buttons? That's like Facebook asking me to learn a new language. Well, I don't wanna learn a goddamn new language, Facebook. This is America, and I'm putting my foot down! Not in my backyard! Boo, Facebook! Hiss!"

To which we would respond: We totally understand. Human beings, in general, are resistant to change, and given that we've been relying on Facebook likes for about seven years, adding five new options is indeed a bit overwhelming. Additionally, the new reactions seem fraught with potential complications: What if you "wow" something you're supposed to "sad," or "sad" something you wanted to "love"? Social media is hard!

Well, don't be afraid. It's OK, we promise! We've come up with a handy guide to how to use the reactions for any possible post or status update you might see on your feed. From your cousin's ugly baby photos to your uncle's Trump endorsements to your high school nemesis's humblebraggy fitspiration photos, we've got you covered.

1. A girl you went to high school with posts an outrageously NSFW selfie (there may or may not be pube). Which button do you use?

Your impulse might be to give this a "sad." You must fight this impulse. Social media is a place for betches to tell each other how hot they are, and Facebook is no exception. A "wow" expresses marvel at her physique, while also being shady enough to give off a slight hint of disapproval at the fact that she clearly has a landing strip. (Chaplin mustache or GTFO, girl.)

2. Your uncle posts a vaguely coherent political rant that, in a single post, manages to offend women, people of color, sexual assault survivors, gays and lesbians, the relatives of those who died in the 1904 sinking of the Lusitania, the U.S. military, redheads, dog owners and fans of the 1990s teen NBC series California Dreams. What button do you use?

Because really, that's the only response that this level of stupidity merits. What kind of soulless monster doesn't love the California Dreams? Remember the video for "This Time?" That shit was a banger.

3. An obnoxious former colleague posts a lengthy screed saying that he's getting off Facebook so he can "take a breather from social media" and "live in the now." What button do you use?

Follow that up with the comment: "I have only one thing to say and that is: How dare you, sir? How dare you deprive the world of your gifts?"

4. A coworker you have a crush on posts a vacation photo of himself in a pair of swim trunks. What button do you use?

Listen, it's 2016, ladies. We don't need to go beating around the bush if there's someone we want to beat around our bushes. (It only took like four minutes for us to come up with that.) If you're super into someone, press that "love" button and press it proudly, and don't worry about whether it makes you look lame or thirsty.

5. A casual acquaintance posts a photo of her new baby, who is unspeakably hideous (think Ursula the Sea Witch crossed with a wire-haired fox terrier). What button do you use?

If you can't use these new reaction buttons to laugh at people's fugly babies on social media, then what's the point?

6. Your ex-boyfriend shares his opinion about the Israeli-Palestinian conflict. What button do you use?

The correct answer: None. You've found the answer to one of the most turbulent geopolitical issues of our time. You call a State Department official immediately and tell them you've found the key to peace in the Middle East, and it's from the guy who fingerbanged you in the back of his Toyota Camry senior year of high school. Hurry! There's no time to waste!