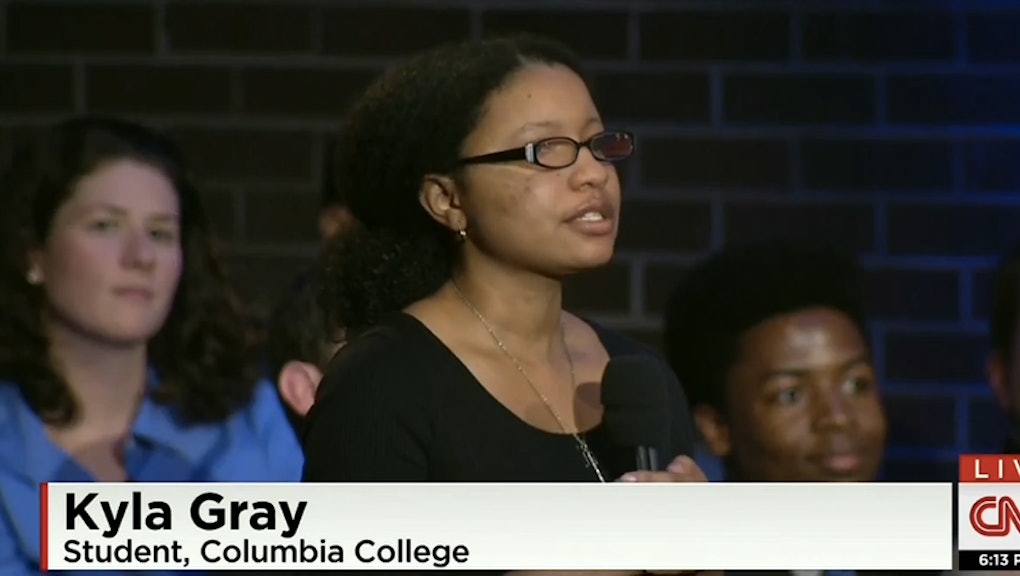 Why the "Natural Hair" Question for Hillary Clinton Mattered, From the Woman Who Asked It

During the Democratic town hall Tuesday night, presidential hopefuls Hillary Clinton and Bernie Sanders fielded questions from an audience of South Carolina voters. Some wanted to know about each candidates' view on the criminal justice system, while others wanted to know about Wall Street.

For one woman, Columbia College junior Kyla Gray, natural hair was the topic she wanted the candidates to address.

"Recently I started wearing my hair natural," the 22-year-old began, "and I've noticed a difference in the way some people address and look at me."

The simple mention of natural hair alone sent Twitter into a frenzy. For some, it was an watershed moment, since the matter of natural hair was being talked about on CNN.

For others, it only highlighted doubts about Clinton's racial awareness. As Gray started to ask her question, Clinton interjected, "I'm sorry, you started what?" either not hearing her correctly, or perhaps, as some on Twitter speculated, implying she wasn't sure what that meant.

Others were skeptical as to why someone was bringing up natural hair at all.

Natural hair, however, wasn't Gray's point — it was how the recent reactions to her hair relates to racism.

"In the wake of things like Ferguson and Black Lives Matter and the recent backlash against Beyoncé for her 'Formation' video, there have been a lot of racial tensions recently in our nation," Gray continued. "So my question to you is what do you intend to do to fix the broken racial relations in our nation?"

Why hair matters: "I decided to ask Hillary Clinton that question because, as noted during the town hall, she has a large number of African-American supporters, more than Sanders even," Gray told Mic. "The stigma surrounding natural hair is a piece of the whole that makes up racism."

And that stigma is still very real, at a time when girls are regularly making headlines for getting suspended or called to the principal's office for wearing natural hair to school.

"The stigma against natural black hair is just a symptom of a greater problem," Gray said. "The only way to get rid of the symptom is to address the problem itself. I wholly believe that conversations about race are ones we need to be having. We can't fix the problem if we aren't talking about the symptoms."

And that was, by and large, what Clinton's response touched on. "First of all, thank you for being so candid and brave to stand up and say this about yourself," Clinton said. "I believe strongly that we have to deal with systemic racism, and systemic racism is found in our criminal justice system, it's found in housing, in job opportunities, in education, and it's also cultural."

"You have a right to wear your hair any way you want to," Clinton said later on during the event. "That's your right. As somebody who, ya know, has had a lot of different hairstyles, I say that from some personal experience."

(That, of course, elicited its own stream of tweets, as viewers were uncomfortable with Clinton trying to relate to Gray.)

But what did Gray actually think? How does she think Clinton fared? Was she pleased?

"Yes and no," Gray said. "I liked what Clinton had to say on the subject even though she didn't really answer my original question. I asked about what she would do to help fix broken racial relations not what she thought about them. She listed what needed to be done and I agree on that, but she didn't mention any plan that she had."

Either way, Clinton did hit on one important point. Racial prejudice is undoubtedly wrapped up in culture, particularly our beauty standards that have long prioritized white looks above others. That's why the recent movement by women of color to celebrate their natural hair has been so meaningful. Viola Davis has made a point to wear her natural hair on red carpets. Model Maria Borges was the first model to ever go natural for the most recent Victoria's Secret Fashion Show, and more and more magazine covers are featuring celebrities with their hair in Afros or braids.

But as Gray said, the conversation about hair needs to be part of a broader one.

"In order to address the stigma around natural hair, the nominee or the president has to address racism itself," Gray said. "Which will be, without a doubt, difficult."