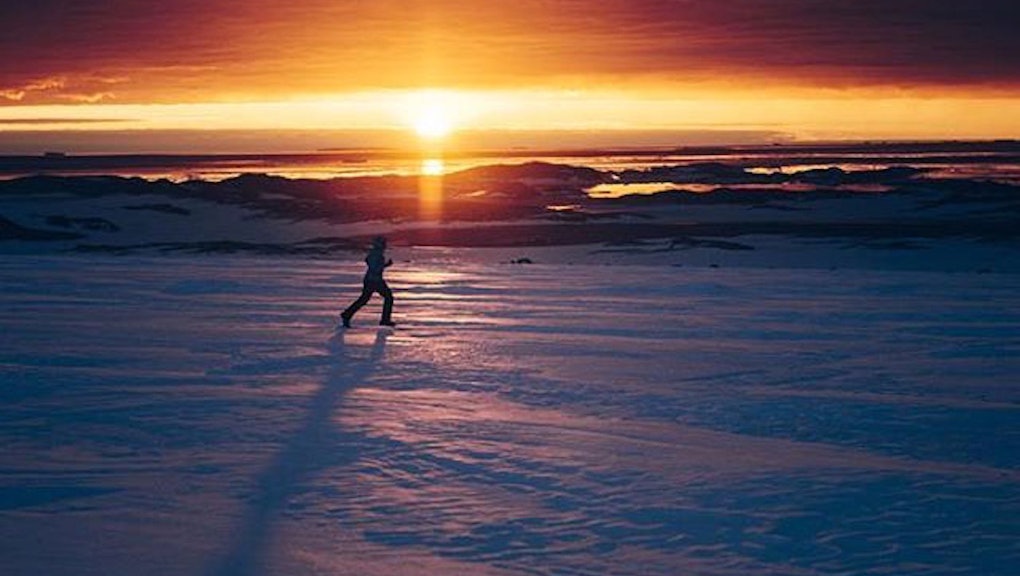 Australian businesswoman Mina Guli is either crazy or crazy committed. In an effort to raise awareness about the global water crisis, the 45-year-old is running 40 marathons across seven deserts, on every continent, in seven weeks.

Calling it the "7 Deserts Run," Guli set out on Feb. 1 and hopes to complete her epic journey on March 22.

As the founder and CEO of Thirst, a charity devoted to water conservation, Guli has embarked on her feat to draw international attention to the global water crisis. Upon completion, Guli will have run nearly 1,050 miles.

Read more: Why Water Shortages Are the Greatest Threat to Global Security

"I had always thought growing up in Australia through years of drought that water was an issue we were solving by putting buckets under the tap," she told Mashable Australia on Friday before beginning her stretch across the country's Simpson Desert. "What I had not fully understood is that even a simple thing like eating a hamburger is the equivalent of taking a two-hour shower."

Guli wrote an op-ed for Huffington Post Australia on Feb. 10, in which she laid out why people need to take this issue more seriously and determine how to address it.

"We are using water at an unsustainable rate. By 2030, experts predict that global demand for water will be 40% greater than supply," Guli wrote.

Guli spoke with news.com.au about some of the physical challenges, such as running through a white-out on a polar ice cap at minus 4 degrees Fahrenheit. Those are the moments, she said, when she questions what she's gotten herself into.

But a quick reflection on the issue that prompted this journey, she added, fortifies her. She wants people to think about their "invisible water consumption" in the hopes that it might lead to more responsible consumer decisions.

"I'm not telling anybody what they can eat, drink or do," Guli explained to news.com.au. "I want them to think about their daily consumption pattern. Do they want tea today instead of coffee? Can they eat a vegetarian meal today? Could they choose cotton over a polyester T-shirt?"

"What I hope will happen is that one day people will go to a coffee shop that offers beans made using water in a sustainable way," she told news.com.au. In her Huffington Post op-ed, Guli noted a cup of coffee, including the water required to grow the beans in the first place, requires 140 liters of water.

"Water change is urgent; I'm horrified that no one is talking about it," she told news.com.au. "It's not a problem we can ignore. We need to start talking about it because the clock is ticking."