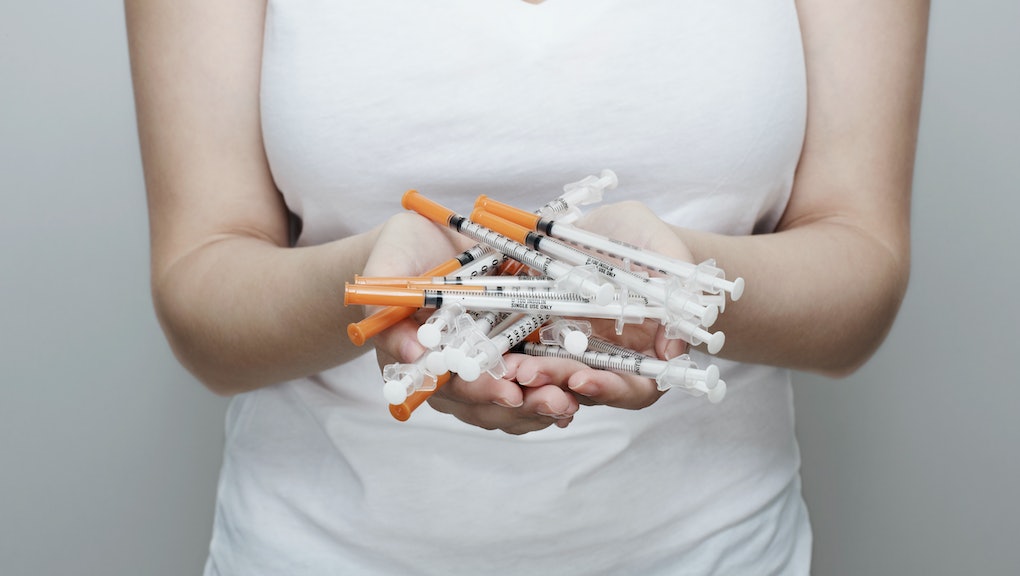 Diabulimia: The Life-Threatening Eating Disorder We Never Talk About

Every time Amy* lands in the hospital for restricting her insulin, doctors rush to treat the physical symptoms of her insufficiency. No one ever asks about the eating disorder that got her there in the first place.

"By the time doctors realize I'm sick, all they care about is my diabetes," the 22-year-old North Carolina resident told Mic. "An eating disorder never comes to mind or just takes the back burner."

In fact, Amy has been struggling since high school with diabulimia — an eating disorder wherein people with Type 1 diabetes intentionally restrict their insulin in order to lose weight.

Taking insulin helps people with Type 1 diabetes absorb glucose, so it can be converted into energy or stored as fat. When they stop taking insulin, their bodies eliminate that glucose through pee. Instead, they get energy by breaking down fat stored in the body.

That leads to weight loss. But it also leads to severe health consequences.

Without insulin, people with Type 1 diabetes can face anything from exhaustion and nausea to diabetic ketoacidosis, coma and even death.

Though increasingly well-known among diabetes and eating disorder communities, diabulimia still isn't formally recognized as a medical or psychiatric condition, like anorexia or bulimia. Doctors tend not to know how to treat it — or even what it is. As a result, diabulimia often goes undiagnosed and untreated, according to We Are Diabetes.

Amy began restricting her insulin in high school. She was diagnosed with Type 1 diabetes at age 10, and for years she worked hard to manage the condition.

But she also struggled with body image issues, which led to disordered eating patterns. She'd restrict her food and lose a few pounds, but because she had diabetes, her blood sugar would drop too low. Eventually, she'd be forced to consume more calories again, and she'd gain the weight right back.

"I was disgusted and angry that because I had diabetes, I couldn't control my body like most people could," Amy said. So she decided to give up on managing her illness. Meanwhile, she became drawn to diabulimia.

She started dropping pounds — and quickly. "Each time the number went down on the scale," she said, "it was pure jubilation for me."

But without insulin, her health was declining. "I was really skinny, but you could see in my face and my eyes that I was sick," Amy said. "My blood sugars were so high that there were a lot of mornings where I'd try to get up, and feel so sick that my vision would start to go dark, and I felt like I was going to pass out."

Without insulin, Amy's health was declining. "I was really skinny, but you could see in my face and my eyes that I was sick."

A dangerous cycle had begun. Amy would restrict her food and lose weight, restrict her insulin and lose more, get sick and have to be hospitalized. Then she'd get better and put the weight back on, "and the cycle starts again," she said.

Amy quit college after her insulin restriction resulted in a week-long stay in the intensive care unit. Though currently in therapy, she continues to struggle with diabulimia.

Would things have been different if Amy had gotten help for diabulimia back in high school?

"I think it would have stopped the cycle," she told Mic. "Or at least made it easier."

Why aren't people like Amy getting help earlier? A major problem is a lack of awareness, among both patients and medical professionals, about what diabulimia is.

"Diabulimia is not as well known as other eating disorders, because it impacts such a specific, and relatively small, community of people," Ashley Streeter, a doctoral student in the Department of Counseling and Educational Psychology at Texas A&M University-Corpus Christi, told Mic.

"Medical and mental health professionals are often not exposed to eating disorder issues related to diabetes," Streeter continued. "If they haven't had previous exposure to diabulimia, they cannot recognize it when patients or clients experience it."

Lots of people who discover diabulimia "kind of come upon it on their own," Akers told Mic. "They hear about it at diabetes camp, or in a chat room."

"It was definitely something that didn't get a lot of attention. I don't think I was ever warned about it by a doctor."

A summer camp for girls with Type 1 diabetes is how Laura Burby, 21, first heard about diabulimia. Her counselors gathered the campers in their cabin for an informal discussion.

"I remember them saying that it's pretty common, especially among teenage girls, but that it's super-unhealthy and can lead to really bad health problems," Burby told Mic.

"It was definitely something that didn't get a lot of attention," she said. "I don't think I was ever warned about it by a doctor."

She never learned about it at school, either.

"You learn about the more common eating disorders in sex ed, but I was one of two diabetics in my school of 2,000 people," Burby said. "So even if they did know about it — which they probably didn't — they probably wouldn't have thought it was relevant to teach since there were only two of us."

And, as in Amy's case, even when patients are hospitalized for complications related to diabulimia, doctors tend to fix only the physical problems — without addressing the mental ones.

"Doctors love to focus on the symptoms, because the symptoms are easy to fix," Akers said. If a patient comes in with an eating disorder related to diabetes, "you're talking about therapy and years of work," she said. "You're trying to tackle issues most doctors don't understand."

Doctors need to be clued in. Among people with Type 1 diabetes, diabulimia is surprisingly common, according to the New York Times.

In a recent study that followed 234 women with Type 1 diabetes over the course of 11 years, 30% of the women reported intentionally restricting their insulin intake. The women who withheld their insulin died, on average, at 45 — significantly younger than women who didn't, whose average lifespan was 58 years.

In Amy's case, doctors tended to fix only the physical problems — without addressing the mental ones.

Diabulimia affects both women and men, as indicated by this study focusing on Type 1 diabetes in patients ages 11 to 21. It found that "one in three girls and one in six boys had reported either disordered eating, insulin restriction or both," according to the Times.

The stigma and shame associated with mental health and diabetes mismanagement make it hard for people with diabulimia to speak up about what they're going through, Streeter said, "which then lessens the chance that medical and mental health professionals will be exposed to diabulimia."

Fortunately, things can change. Over the past few years, Diabulimia Helpline has been hosting events around the country training doctors on how to recognize and treat the eating disorder. The group is also planning conferences where people affected by diabulimia can come together and support one another.

Treating diabulimia isn't easy. After all, managing diabetes requires obsessing over numbers and nutritional data — exactly what people recovering from eating disorders should try to avoid. Akers recommends getting help from a "full-treatment team," including an endocrinologist, a therapist and a dietician who specializes in eating disorders.

"Even though it may be more rare than other eating disorders, it still is one."

"Medical professionals working with those who have diabetes need to remain aware and create awareness of mental health concerns related to diabetes," Streeter said. "Along with that, I think medical professionals should work toward creating a caring, safe and validating environment for their patients."

Burby feels strongly that we need to talk more about diabulimia. "Even though it may be more rare than other eating disorders," she said, "it still is one."

After Burby's counselors gave their talk on diabulimia, her best friend at camp revealed a secret to her: She'd recently gone through a six-month period of restricting her insulin to lose weight. Eventually, the friend had been hospitalized for diabetic ketoacidosis.

"Until then," Burby said, "she hadn't known that other people had gone through the same thing."

*Name has been changed to let sources speak freely on sensitive issues.