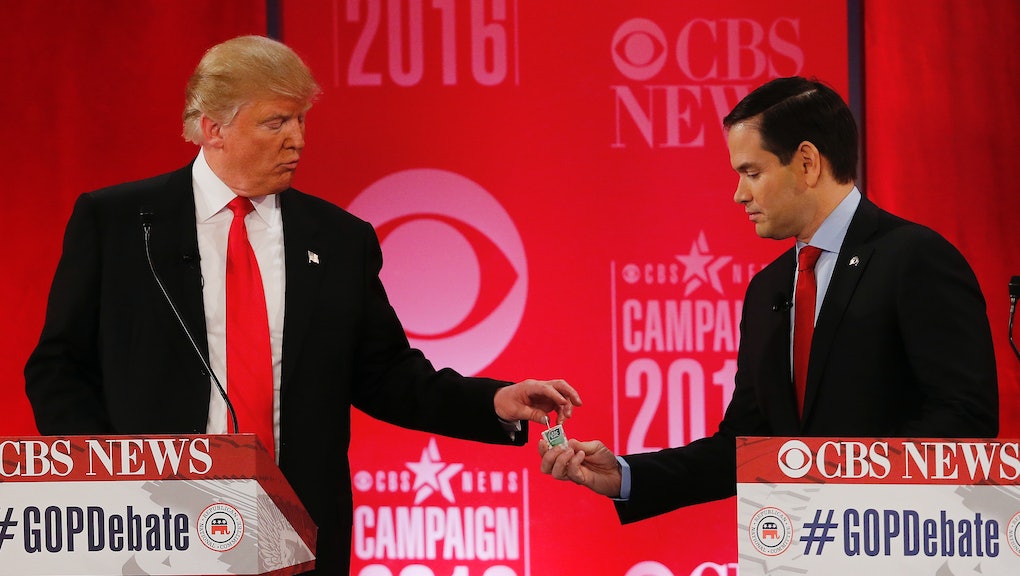 After beating out Ted Cruz for second place in the South Carolina primary and the Nevada caucuses, Marco Rubio has emerged as the leading challenger to Republican frontrunner Donald Trump, the one man who could potentially derail the billionaire tycoon's steamrolling campaign.

In order to upset Trump, of course, Rubio has to start winning somewhere. The Florida senator's campaign sees his home state's March 15 primary — in which the winner nabs all 99 delegates — as a prime opportunity to do just that, resetting the narrative of a GOP race heretofore dominated by Trump.

Daunting odds: A new poll suggests that Rubio's best-laid plans are unlikely to work out.

Even with former Florida Gov. Jeb Bush now out of the race, Rubio trails Trump badly in Florida, a Quinnipiac University poll released Thursday finds. Trump, who owns the plush Mar-a-Lago resort in Palm Beach, claims 44% in the poll, followed by Rubio at 28%, Cruz at 12%, Ohio Gov. John Kasich at 7% and retired neurosurgeon Ben Carson at 4%.

The poll underscores how badly Trump's rivals have miscalculated in figuring that he'll run up against a hard ceiling of around one-third of the vote. Even in a five-man field, the businessman is tantalizingly close to 50% support. And even if Ohio Gov. John Kasich were to drop out to clear the establishment lane for Rubio — a big if — and Rubio were to win all of Kasich's voters —  a very generous assumption, to put it mildly — he'd still lag well behind the frontrunner.

What fuels Trump's support? A 32% plurality of likely GOP primary voters say that strong leadership is the most important quality they're looking for in a candidate — and Trump crushes the field among these voters, garnering 66% support to Rubio's 16%.

Meanwhile, 23% of voters told Quinnipiac that they were looking for an honest and trustworthy standard-bearer. Here, Trump and Rubio tie with 30% support each.

Is Trump putting this thing to bed? It's difficult to envision a scenario in which Rubio loses Florida and remains in the race.

Given that Trump wins 99 delegates whether he beats Rubio by a percentage point or a landslide, this isn't a situation in which Rubio can hope to claim momentum simply by beating expectations. (Also, did we mention that we're talking about his home state?)

With Trump leading in most states that vote early next month and his rival's hopes for upsetting him fading fast, it's far from inconceivable that a race many observers expected might last until the July convention will be over in a matter of weeks.