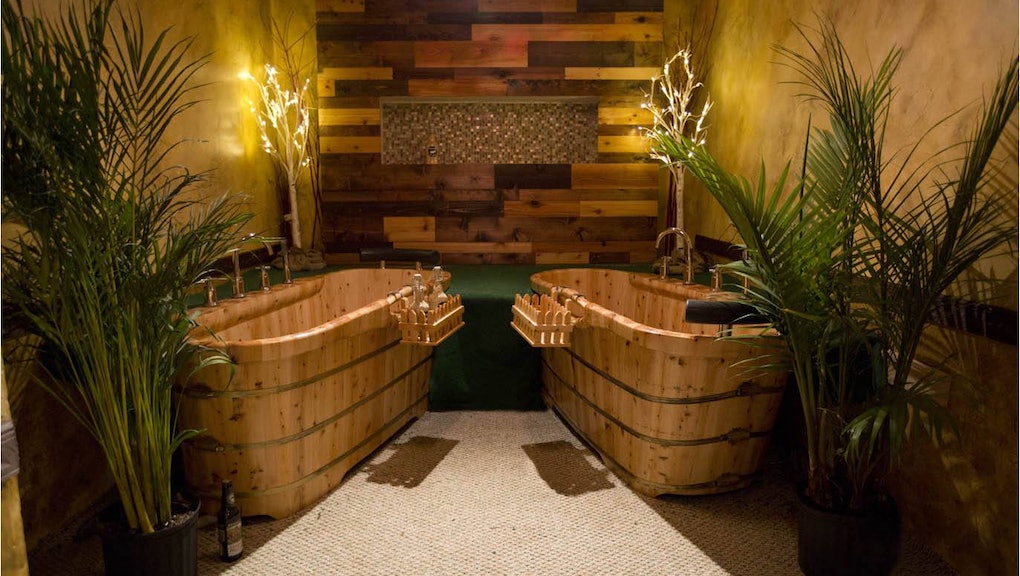 Come Soak in This Bro-Friendly Spa for Beer Lovers

Spas are not typically known for their clientele of bros. They're also not exactly known for their supply of beer. So in many senses, Oregon's new Hop in the Spa, "the first and only Oregon spa to bring the benefits of soaking in beer inspired ingredients, minerals and proprietary additives," is the perfect fusion of rarities.

But don't give too much side-eye just yet.

Founded by massage therapist Sally Champa, the new spa, which opened its doors in Sisters last week, offers microbrew baths and ale foot soaks, as well as a "brew and renew body polish" in which your body is scrubbed with an in-house handcrafted polish of hops, barley, honey, jojoba oil and salt.

So while you won't be able to get shwasted on the world's most widely consumed alcoholic beverage mid-hot stone therapy, your body will still be treated to plenty of ale.

"We're just starting to get know the true value of hops," Mike Boyle told the Oregonian. Boyle helped develop the idea for the spa with Champa after a car accident landed him on her massage table to recover.

As bizarre a concept as it might seem, it's hardly anything new. "They do this in Prague, they do this in Europe," Champa said. "Since the Middle Ages they've been soaking in beer."

While we weren't there centuries ago to confirm that last part, the first part is true: Pilsen Beer Spa in the Czech Republic offers custom-made wooden tubs filled with, among other ingredients, Pilsner malt. Meanwhile, Prague's Beer Spa Olomouc offers a soothing procedure which involves sweating in a salt sauna, bathing in Czech beer and a 30-minute beer massage.

Plus, using alcohol for beauty isn't unheard of stateside: We love a good wine face mask.

So clearly, Europe has caught on to beer spas. But will America follow suit? It seems so, with Champa telling the Oregonian that her phone has been ringing off the hook since they opened their doors last weekend. (For the record, we tried repeatedly calling during business hours and received no answer.)

Next time you happen to find yourself in Sisters, Oregon, why not treat yourself to a little beer-infused R&R? It's not just for the bros.